Get This Book
Visit NAP.edu/10766 to get more information about this book, to buy it in print, or to download it as a free PDF.
« Previous: Robert M. Sneider
Page 292 Share Cite
Suggested Citation:"Vivian T. Stannett." National Academy of Engineering. 2008. Memorial Tributes: Volume 12. Washington, DC: The National Academies Press. doi: 10.17226/12473.
× 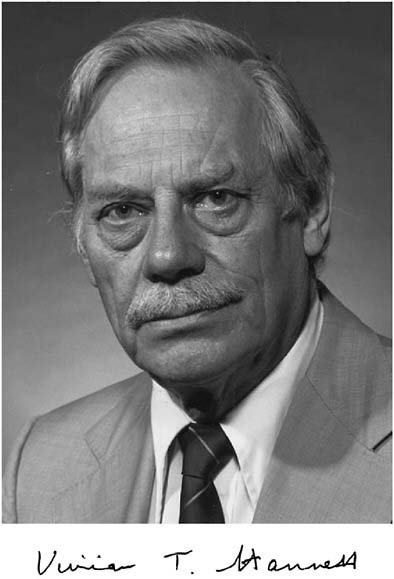 “For contributions to the understanding of transport processes and polymer radiation chemistry in polymers.”

VIVIAN THOMAS STANNETT, Camille Dreyfus Professor Emeritus of Chemical Engineering and dean emeritus of the Graduate School at North Carolina State University, died October 1, 2002, at the age of 85. He was elected to the National Academy of Engineering in 1995 for his original contributions to the understanding of transport processes and radiation chemistry in polymers.

An internationally renowned polymer scientist/engineer, Vivian pioneered the use of high-energy radiation to form new polymers or alter existing ones through cross-linking, grafting, and degradation. A recognized leader in the study and application of membrane science and technology, his work contributed to the development of a wide range of beneficial products, including super-absorbent paper towels and diapers and flame-resistant textiles. He also worked extensively on chemical modifications of cellulose and applications of polymers to pulp, paper, and textiles.

Vivian was born on September 1, 1917, to a farming family in Langley, England. Much to his father’s distress, he had no desire to take up farming. Interested in chemistry from an early age, he carried out experiments on his own in an abandoned railway carriage on the family’s property. In 1936, he took another step toward fulfilling his dream of becoming a scientist by enrolling in the London Polytechnic to study chemistry; he graduated with a B.S. in 1939.

After obtaining his degree, Vivian worked for the British government from 1939 to 1947, first as a shift manager of the cellulose-acetate film plant at the British Celanese Corporation. Cellulose-acetate films were in great demand during the war for gas masks and other military uses. In 1941, he was assigned to the Army laboratories at Woolwich Arsenal, where he worked on detonator inspection and research. When the arsenal was severely damaged by bombs, Vivian was moved to a large ordnance plant and laboratories in Liverpool. Later, he was moved back to Woolwich, only to have his laboratory destroyed by a V2 rocket. He then moved to another cellulose-acetate plant.

When the war ended, Vivian applied to study with Professor Herman Mark at Polytechnic Institute in Brooklyn (now Polytechnic University) for a Ph.D. in chemistry. He was accepted in 1947 as a graduate student under Professor Mark, without a fellowship, but he was promised one if he did well the first semester. He received his fellowship the following January, and in 1950, he received his Ph.D. in physical chemistry. Afterward, he returned to London.

On May 30, 1946, Vivian Stannett had married Flora Susanne Sulzbacher, who holds an honors degree in textile chemistry from Queens University in Belfast. Vivian and Susanne had one daughter, Rosemary Anthia (now Royce), and three grandsons. In 1951, Vivian accepted a position as research chemist at the Koppers Company and became a research associate at the Mellon Institute in Pittsburgh. At that time, he and Susanne moved permanently to the United States; they became U.S. citizens in 1957.

In 1952, Vivian accepted an appointment as assistant professor of forest chemistry in the College of Forestry in Syracuse, New York; in 1957, he became a full professor. In 1958, he took a sabbatical leave at the University of Paris, where he became associated with Professors Michel Magat and Adolphe Chapiro, leaders in the field of radiation grafting and the radiation chemistry of polymers. When he returned to the United States, he continued this work in Syracuse and later, in 1961, as associate director of the newly formed Camille

Dreyfus Laboratory for Polymer Research at the Research Triangle Institute in North Carolina. The laboratory director was Professor Anton Peterlin.

While working at the Dreyfus Laboratory, Vivian kept up his academic credentials by becoming adjunct professor of chemistry at Duke University; later he also became adjunct professor at North Carolina State University (NCSU). In early 1967, he left the Dreyfus Laboratory and joined NCSU full time as professor in the Chemical Engineering Department; he was later named Camille Dreyfus Professor. Vivian officially retired in 1988 when he reached the mandatory retirement age of 70. However, he continued working with graduate students until 1992.

During his scientific and academic career, Vivian published more than 400 papers and reviews on polymer science and technology. He also served on the editorial boards of seven prestigious journals. It comes as no surprise that he also received many honors. He was a fellow of the Royal Institute of Chemistry (1948), New York Academy of Sciences (1960), TAPPI (1968), and the Royal Society of Chemistry (1980). He received the Silver Medal from TAPPI (1967), the American Chemical Society (ACS) Award for Polymer Chemistry (1987), the Borden Award from the ACS (1974), the ACS Anselm Payen Medal (1974), the International Award and Gold Medal of the Society of Plastics Engineers (1978), the Olney Medal of the American Association of Textile Chemists and Colorists (1995) and the Distinguished Speaker Award (1983), the Alcoa Foundation Distinguished Research Award from the NSCU School of Engineering (1981), the North Carolina Science Award and Gold Medal (1981), the University of North Carolina Board of Governors O. Max Gardner Award (1984), the North Carolina Distinguished Chemistry Award from the North Carolina Institute of Chemists (1989), and the Holladay Medal from North Carolina State University (1992).

Vivian was active in many professional groups and organizations. He was chairman of the North Carolina Section of ACS (1970), chairman of the ACS Division of Polymer Chemistry (1977), and general secretary of the Macromolecular

Secretariat (1979). He was also involved with TAPPI, the Society of Chemical Industry, Phi Kappa Phi, and Phi Lambda Upsilon. He was chairman for the Gordon Conferences on Polymers (1972) and on Chemistry and Physics of Paper (1967).

Vivian had a unique sense of humor, which made life easier at times and was appreciated by all. He had few hobbies but liked hiking and bicycle riding. His wife recalls that when he finished high school he spent the summer before university cycling all over Europe by himself and got as far as the Alps. He finally ran out of money on his return trip and found an old friend in Holland who lent him enough to return home. He was also an avid reader, and not only of books about science.

Vivian was a true English gentleman who was able to find diplomatic and considerate solutions to problems and was liked by everyone who knew him. He devoted much of his life to mentoring younger colleagues who benefited greatly from his advice and example. He had an uncanny knack of making progress and contributions with grace and dignity. His colleagues from all over the world paid tribute to him at a symposium in his memory at an ACS meeting in New York in September 2003.

Vivian is survived by Susanne, his wife of 56 years; his daughter Rosemary Royce and son-in-law Christopher Royce; and grandchildren Julian, Trevor, and Liam Royce. Julian, the oldest, graduated last year from the University of North Carolina with honors, in religious studies. Trevor, the older twin, graduated this year from the University of Virginia, with honors, in biochemical engineering; he now hopes to go on to medical school. Liam, the younger twin, is in a five year program in pulp and paper and chemical engineering, at NCSU. As Vivian’s daughter notes, engineering is still in the Stannett family. Vivian’s sister-in-law, Ellen Strauss of London, also survives him.

I wish to thank Vivian’s wife, Susanne, and his friend, Otto Vogel, for their help in preparing this tribute.

Next: David Tabor »
Memorial Tributes: Volume 12 Get This Book
×