Get This Book
Visit NAP.edu/10766 to get more information about this book, to buy it in print, or to download it as a free PDF.
« Previous: Gordon K. Teal
Page 314 Share Cite
Suggested Citation:"Alexander R. Troiana." National Academy of Engineering. 2008. Memorial Tributes: Volume 12. Washington, DC: The National Academies Press. doi: 10.17226/12473.
× 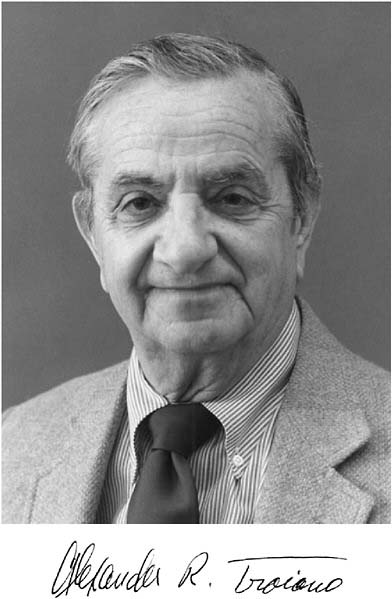 “For distinguished contributions to understanding the mechanical behavior of metals, and to the education of metallurgists.”

ALEXANDER ROBERT TROIANO, Republic Steel Professor Emeritus of Case Western University, died June 12, 2002. Born in Boston, Massachusetts, on September 5, 1908, Troiano attended Boston public schools, then Harvard University, where he received an A.B. in physics and mathematics in 1931. After four years as an instructor of physics at Middlesex College, he returned to Harvard for graduate study. He received his M.S. in 1937 in metallurgical engineering through a cooperative program with the Massachusetts Institute of Technology.

From 1937 to 1939, he was Gordon McKay Fellow and instructor in physical metallurgy at Harvard, and, in 1939, he received an Sc.D. from the Harvard Graduate School of Engineering. His thesis, under the aegis of A.B. Greninger, was a pioneering investigation of the crystallography of the martensite transformation in steels.

At a time when a fierce controversy was raging about the decomposition of austenite at low temperatures, Troiano and Greninger established unequivocally the essential and distinct kinetic behavior of the martensite transformation. They also provided new information on, and insight into, the crystallography and mechanism of the martensite reaction.

In 1939, Dr. Troiano accepted a position as assistant professor in the Department of Metallurgy at Notre Dame University; he was promoted to associate professor in 1941 and professor in 1945. He was department head from 1947 to 1949. During his years at Notre Dame, he continued to pursue his interest in phase transformations and made significant advances in our understanding of grain-size effects on the martensite transformation, produced a series of time-temperature-transformation diagrams in the iron-chromium-carbon system that advanced the concept of the incomplete reaction associated with the decomposition of austenite to bainite, and studied the martensite transformation in cobalt and the sigma phase in stainless steels.

During World War II, as an inspection engineer for munitions production, he was involved directly in manufacturing for the war effort. He was instrumental in revising standards and procedures to ensure the quality of components being shipped to the field, and, at the same time, he learned a great deal about the quenching techniques used to impart residual stresses into cannon barrels. This direct exposure to manufacturing influenced the rest of his career.

After the war, Professor Troiano, by now well established in the metallurgical community, joined the Department of Metallurgy at Case Institute of Technology as professor in 1949 and department head from 1953 to 1967, when he was awarded the Republic Steel Corporation distinguished professorship. Upon retirement from the Republic Steel chair in 1979, he remained active in research at Case Western Reserve University as senior research scientist and Republic Steel professor emeritus until his death on June 12, 2002.

While at Case, he initiated programs in mechanical properties, with a focus on the metallurgical aspects of embrittlement, which led to programs in slack quenching and the end-quench test, 500°F embrittlement of quenched and tempered steels, the mechanical properties of carburized steels, hydrogen embrittlement and delayed failure, and eventually stress-corrosion phenomena. He also continued to pursue his interest in phase transformations, with an emphasis on the

As department head, he was an insightful guide to the development of the metallurgy and materials science programs at Case. Among the many talented faculty he hired were NAE members Al Cooper (in 1965) and Art Heuer (in 1967), who initiated a graduate project in ceramics, which, in the ensuing decades, played an important role in the evolution of ceramic science and technology in the United States.

Professor Troiano published extensively on heat treatment and phase transformations of ferrous and nonferrous alloys, engineering applications of materials, and environmental degradation of materials, including hydrogen embrittlement and stress-corrosion cracking. He gave numerous keynote and honorary lectures throughout the world and was an active consultant to industry and government. As a member of the American Society for Metals (ASM), the American Institute of Mining (AIME), Metallurgical and Petroleum Engineers, the American Society for Testing and Materials, the National Association of Corrosion Engineers, and Sigma Xi, he served on and chaired many committees and helped organize many conferences.

Among his many awards were the Robert W. Hunt Medal, AIME (1941); the Henry Marion Howe Medal, ASM (1956); the Edward DeMille Campbell Memorial Lecturer, ASM (1959); the Albert Sauveur Achievement Award (1968) and Honorary Membership in ASM (1978); the LeChatlier Medal of the French Metallurgical Society (1980); and fellow of the Minerals, Metals and Materials Society (1984).

A summary of an academic career does not always convey the impact of an individual on his field or the institutions and people who represent it. Al Troiano devoted his entire professional career to education and research on many facets of physical metallurgy. His research interests ranged from dental alloys (which led to the identification of the g-brass structure in these materials); the kinetics, crystallography, and mechanism of martensitic transformations; systematic

evaluations of alloying effects on the kinetics and mechanisms of austenite decomposition and transformations in titanium-based alloys; the mechanical behavior of high-strength steels as related to slack-quenched structures and embrittlement during tempering; and the effects of hydrogen on the mechanical behavior of both ferrous and nonferrous alloys. The latter studies led to his interest, in the autumn of his career, in stress-corrosion cracking in a wide range of commercially important alloys.

The many honors he received and keynote lectures he presented at national and international conferences attest to his esteem in the metallurgical community. However, the many ways his contributions provided a conceptual framework for the evolution of the field is a more representative measure of the true value of his work. The list of his publications reveals his wide range of interests but gives no indication of the in-depth consultations, critical analyses, and probing discussions with colleagues, friends, and students that resulted in clarifications and the subsequent evolution of new concepts.

Throughout much of his career, Troiano’s immersion in research was paralleled by his attention to teaching and academic administration. His leadership, insight, and unselfish devotion were instrumental in the development of both strong research and curricular programs and the academic and professional development of aspiring young faculty. An entire generation of students, first at Notre Dame and then Case Institute of Technology and Case Western Reserve University, benefited from his guidance, his wise counsel, and his sympathetic concern.

Students who worked with Professor Troiano soon realized that his motivation for research was based on a deep-seated interest in industrial problems. In an era when many academic researchers were turning away from problems of interest to industry, he continued to devise and carry out research programs that clarified the basic metallurgical variables that controlled complex industrial processes and applications. His interest in industrial problems lasted throughout his career,

from his early work on phase transformations in steel to his later work on stress corrosion.

Professor Troiano enjoyed interacting with his students outside of the classroom and laboratory. An avid golfer, he encouraged his graduate students to pursue the game, and he greatly enjoyed afternoon rounds of golf with them, department staff, and fellow faculty members. He also maintained his connection to the New England area throughout his life. He owned a cottage on the ocean side of Cape Cod, where he loved to go fishing in his boat, and he relished the family’s summer vacations there. Upon attaining emeritus status, he and Anne (who was an accomplished artist of Cape Cod seascapes) began spending entire summers on the Cape.

The multifaceted contributions of Professor Troiano to research, teaching, and service advanced the field of materials science and engineering in innumerable ways. His achievements spanned the gamut from insights into the atomistic mechanisms of martensitic transformations and stress corrosion to applied industrial problems involving residual stresses. Being both a teacher and mentor to students and faculty, he cultivated critical thinking combined with a sense of practicality to the many people whose lives he influenced.

Next: Alan Manners Voorhees »
Memorial Tributes: Volume 12 Get This Book
×