Get This Book
Visit NAP.edu/10766 to get more information about this book, to buy it in print, or to download it as a free PDF.
« Previous: Paul Weidlinger
Page 332 Share Cite
Suggested Citation:"Alvin M. Weinberg." National Academy of Engineering. 2008. Memorial Tributes: Volume 12. Washington, DC: The National Academies Press. doi: 10.17226/12473.
× 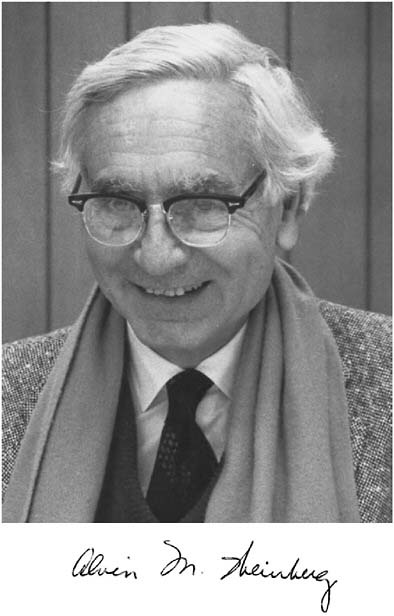 “For contributions in reactor design, development, safety, and understanding of how nuclear power must help meet world energy demands.”

ALVIN WEINBERG, a leading figure in the development of nuclear energy, died at his home in Oak Ridge, Tennessee, on October 18, 2006. Born in Chicago in 1915, Alvin received his B.S., M.S., and Ph.D. from the University of Chicago. He completed his doctorate in mathematical biophysics in 1939 and was soon drawn into the Manhattan Project, working with Eugene Wigner at the Metallurgical Laboratory to design the Hanford plutonium-production reactors. The two became friends as well as colleagues and later collaborated on a classic text, The Physical Theory of Neutron Chain Reactors. Although Alvin cited this book as his major accomplishment as a practicing scientist, he also deserves credit for stimulating the development of several innovative reactor designs, including the pressurized light-water reactor adopted for the U.S. Navy’s nuclear submarines. But he made his mark chiefly in scientific administration and science policy.

Alvin moved to Oak Ridge in May 1945 to work at the Manhattan Project X-10 site, where the Clinton Pile, a pilot plant for producing plutonium, had been constructed. Wigner had drawn up a plan for expanding X-10 into a laboratory for nuclear research with an associated school of reactor technologies, and he persuaded Alvin to join him there as chief of physics. As things turned out, Wigner led the work at Oak Ridge for only a year, while Alvin devoted the next 25 years to

building and nurturing a world-class research institution in the hills of Tennessee.

It was an uphill battle, especially at first. When the Atomic Energy Commission (AEC) decided to centralize reactor development at Argonne and focus the work at Oak Ridge on chemical technology and isotope production, it was Alvin who made the case for continuing work on reactors at what officially became Oak Ridge National Laboratory (ORNL) in 1948. Asked to serve as ORNL director in December 1948, he declined, citing his youth and lack of experience, but he agreed to become research director. In this role, Alvin found a variety of ways to sustain the laboratory. The most audacious may have been building a mock-up of the Materials Testing Reactor that would be constructed in Idaho and then convincing the AEC to allow ORNL to operate it as the Low-Intensity Test Reactor, which Alvin christened “the poor man’s pile.”

ORNL staff also worked on the Aircraft Nuclear Propulsion Project, which Alvin cheerfully admitted was a thoroughly impractical idea. Through work on this project, however, the laboratory acquired new capabilities, such as three reactors, a critical-experiments facility for testing reactor fuels, and a physics laboratory for studying the effects of radiation on solid materials, as well as support for its efforts to acquire its first particle accelerators and digital computers. ORNL also pioneered the production of radioisotopes for scientific research and medical treatment, which Alvin later identified as perhaps the laboratory’s most important contribution, and the study of the biological effects and hazards of radiation.

In 1955, Alvin became director of ORNL, a position he called “one of the best scientific-administrative jobs in America.” Although he claimed that his real job was to keep the money coming in, he was committed to maintaining standards—he insisted that ORNL establish a scholarly tradition—and to showing that management cared. He was well known for sitting in the front row at division information meetings and asking the first question after each scientific talk. Indeed, some staff members attended these meetings primarily to hear Alvin’s questions and comments. His presence at a lecture, even in his

last years, was a signal to the speaker to be prepared for at least one penetrating question.

Alvin also enjoyed his contacts with what he called “the best (or at least the most important) people.” When Senator and Mrs. John F. Kennedy visited ORNL in 1959, he turned the senator over to his deputy and claimed for himself the privilege of accompanying Jackie Kennedy. His many contacts in government and the scientific community led to appointments to the President’s Science Advisory Committee during the Eisenhower administration and to President Kennedy’s Panel of Science Information. Based on these experiences, he began to formulate a philosophy of scientific administration, which led him to establish criteria for scientific choice that continue to influence the political debate on priorities for funding science.

Alvin’s first priority, however, was assuring the laboratory’s future, which to him meant putting it to work on what he called “the important things.” As early as 1955, he began exploring opportunities for solving problems beyond the AEC mission. This push to diversify was driven partly by the commercialization of nuclear power, but Alvin firmly believed that national laboratories were uniquely qualified to do “big science” (a term he coined) through coherent attacks on large-scale, long-term, high-risk problems of national importance. Under his leadership, ORNL worked on nuclear desalination, large-scale biology, civil defense, and environmental research, becoming one of the first national laboratories to build a substantial portfolio for non-AEC customers. Thus ORNL acquired skills and flexibility that proved to be valuable assets during the early 1970s, when nuclear power fell into disfavor and environmental issues came to the fore, dramatically changing the research environment.

By this time, however, Alvin’s views on nuclear energy, especially his growing concerns about reactor safety, had placed him at odds with the AEC. In 1972, the management of Union Carbide, which operated ORNL for the AEC, informed Alvin that he was being fired. After taking a one-year leave of absence, Alvin officially resigned as director of ORNL in December 1973.

This was a painful transition for Alvin, though he later said that leaving ORNL was one of the best things that ever happened to him. When the Arab oil crisis of 1973 brought the issue of energy to the fore, he turned to “think tankery,” creating the Institute for Energy Analysis (IEA) as part of Oak Ridge Associated Universities (ORAU). In January 1974, just as IEA was about to begin operation, he was called to Washington to serve as director of the U.S. Office of Energy Research and Development. In this capacity, he contributed to the establishment of the Solar Energy Research Institute (now the National Renewable Energy Laboratory) and the conversion of the AEC into the Energy Research and Development Administration, which later became the U.S. Department of Energy (DOE).

In 1975, Alvin returned to Oak Ridge as director of IEA, one of the first research institutions to investigate the greenhouse effect and to propose nuclear energy as an antidote to global warming. IEA researchers also explored alternative energy sources, conservation, and (looking beyond what Alvin called the “technological fix”) the social, political, and economic factors that influence energy choices. In his view, the accident at Three Mile Island in 1979 brought an end to the first nuclear era. One of IEA’s principal goals was to find a safe, economical path to a second nuclear era.

In 1985, Alvin retired as IEA director and was named an ORAU distinguished fellow by the ORAU Board of Directors. He continued to write and lecture, compiling a publications list that included eight books and 541 journal articles, and he remained a vigorous proponent of nuclear energy. He pointed out in 2002 that both he and the reactors built in the 1960s had exceeded their initial life expectancy, using this observation to argue for the economics of nuclear power.

But Alvin was also deeply concerned about the dangers of nuclear weapons. He commented that the nuclear people had made a “Faustian bargain” (another term he coined that is now in general use), and he led a campaign to bring a huge Japanese friendship bell to Oak Ridge as a lasting reminder of the need for a “tradition of non-use.”

Alvin was a founding member of the American Nuclear Society, which established the Alvin M. Weinberg Award in 1995 “in recognition of outstanding international technical and policy leadership in nuclear science and technology, and for consistently and effectively illuminating the human dimensions of the nuclear enterprise.” Alvin was the first recipient. He also received dozens of other awards from a host of organizations; among the most prestigious were the Atoms for Peace Award in 1960 and DOE’s Enrico Fermi Award in 1980. Alvin was also proud of having been named one of the Ten Outstanding Young Men in America in 1950 by the U.S. Jaycees. He held honorary degrees from 28 universities and was elected to both the National Academy of Sciences (1961) and the National Academy of Engineering (1975).

Despite his many honors, Alvin was modest about his achievements. At ORNL and ORAU, his telephone was answered simply, “Mr. Weinberg’s office.” As he grew older, he was widely accorded a respect approaching reverence. Somewhat bemused by his status as an “icon,” he remarked after a tribute presented at a celebration of his ninetieth birthday, “I was just a guy trying to make a buck.” This, of course, was not what motivated him—rather, he was driven by a passionate concern for the survival of humanity—but Alvin never considered himself one of “the most important” people. He played tennis until he was well into his eighties and was an accomplished pianist whose repertoire included not only Bach, Mozart, and Chopin, but also popular songs and Christmas carols.

Alvin’s first wife, Margaret Despres, died in 1969. His son David died in 2003, and his second wife, Gene Kellerman DePersio, died in 2004. He is survived by a son, Richard; a sister, Fay Goleman; and three grandchildren.

Alvin occupied—in fact, he created—a unique niche at the intersection of science, technology, and society. He thought deeply about the complex issues that arise at this intersection, and he saw clearly the challenges that they present. His insight and foresight in this critical area, and his passionate belief in human ingenuity, will be a continuing source of guidance and inspiration as we continue to wrestle with these issues.

Next: James William Westwater »
Memorial Tributes: Volume 12 Get This Book
×