Visit NAP.edu/10766 to get more information about this book, to buy it in print, or to download it as a free PDF.
Page i Share Cite
Suggested Citation:"Front Matter." National Research Council. 2009. Tackling Marine Debris in the 21st Century. Washington, DC: The National Academies Press. doi: 10.17226/12486.
×

THE NATIONAL ACADEMIES PRESSâ 500 Fifth Street, N.W.â Washington, DC 20001 NOTICE: The project that is the subject of this report was approved by the GovernÂ­ ing Board of the National Research Council, whose members are drawn from the councils of the National Academy of Sciences, the National Academy of EngineerÂ­ ing, and the Institute of Medicine. The members of the committee responsible for the report were chosen for their special competences and with regard for appropriate balance. This study was supported by Contract No. HSCG23-07-C-MMS158 between the National Academy of Sciences and the Department of Homeland Security. Any opinions, findings, conclusions, or recommendations expressed in this publication are those of the author(s) and do not necessarily reflect the views of the organizaÂ­ tions or agencies that provided support for the project. International Standard Book Number-13:â 978-0-309-12697-7 International Standard Book Number-10:â 0-309-12697-5 Cover: The front cover background image of debris on a beach was provided by Anthony F. Amos of the University of Texas Marine Science Institute. The image of the brown boobies on derelict fishing gear was provided by Dr. Dwayne M Â­ eadows of the National Oceanic and Atmospheric Administration. The images of the entangled Hawaiian monk seal and the entangled sea turtle were Â­provided by the National Oceanic and Atmospheric Administration. The back cover and chapter-opening image of an abandoned fish trap was provided by Wolcott Henry 2005/Marine Photobank. Additional copies of this report are available from the National Academies Press, 500 Fifth Street, N.W., Lockbox 285, Washington, DC 20055; (800) 624-6242 or (202) 334-3313 (in the Washington metropolitan area); Internet, http://www.nap.edu. Copyright 2009 by the National Academy of Sciences. All rights reserved. Printed in the United States of America

ACKNOWLEDGMENTS ix Solow, Woods Hole Oceanographic Institution, Massachusetts, appointed by the Divison on Earth and Life Studies, and John E. Dowling, Harvard University, Cambridge, Massachusetts, appointed by the Report Review Committee, who were responsible for making certain that an independent examination of this report was carried out in accordance with instituÂ­ tional procedures and that all review comments were carefully considÂ­ ered. Responsibility for the final content of this report rests entirely with the authoring committee and the institution.

Next: Summary »
Tackling Marine Debris in the 21st Century Get This Book
× 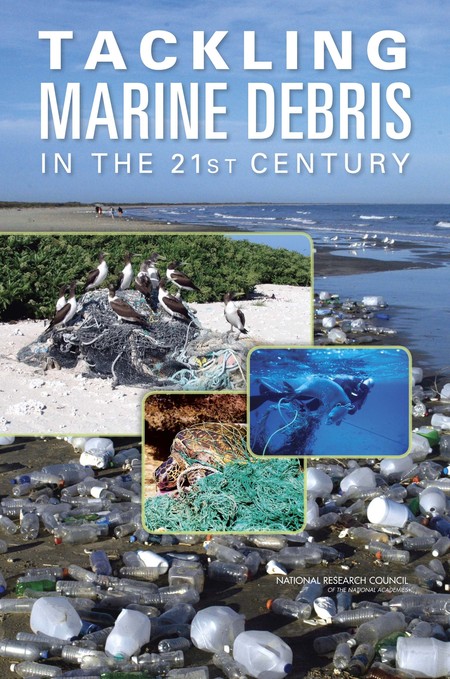 Marine debris from ships and other ocean-based sources-including trash and lost fishing gear-contributes to the spoiling of beaches, fouling of surface waters and the seafloor, and harm to marine animals, among other effects. Unfortunately, international conventions and domestic laws intended to control marine debris have not been successful, in part because the laws, as written, provide little incentive to change behavior.

This book identifies ways to reduce waste, improve waste disposal at ports, and strengthen the regulatory framework toward a goal of zero waste discharge into the marine environment. Progress will depend on a commitment to sustained funding and appropriate institutional support.

The Interagency Marine Debris Coordinating Committee should, through planning and prioritization, target research to understand the sources, fates, and impacts of marine debris. It should support the establishment of scalable and statistically rigorous protocols that allow monitoring at a variety of temporal and spatial scales. These protocols should contain evaluative metrics that allow assessment of progress in marine debris mitigation. The United States, through leadership in the international arena, should provide technical assistance and support for the establishment of additional monitoring and research programs worldwide.