Visit NAP.edu/10766 to get more information about this book, to buy it in print, or to download it as a free PDF.
Page i Share Cite
Suggested Citation:"Front Matter." National Academy of Sciences. 2009. Countering Terrorism: Biological Agents, Transportation Networks, and Energy Systems: Summary of a U.S.-Russian Workshop. Washington, DC: The National Academies Press. doi: 10.17226/12490.
×

Glenn E. Schweitzer, Rapporteur Committee on Counterterrorism Challenges for Russia and the United States Office for Central Europe and Eurasia Development, Security, and Cooperation Policy and Global Affairs In cooperation with the Russian Academy of Sciences

THE NATIONAL ACADEMIES PRESS 500 Fifth Street, N.W. Washington, DC 20001 NOTICE: The project that is the subject of this report was approved by the Governing Board of the National Research Council, whose members are drawn from the councils of the National Academy of Sciences, the National Academy of Engineering, and the Institute of Medicine. The members of the committee responsible for the report were chosen for their special competences and with regard for appropriate balance. This study was supported by Grant No. B 7075.R03 between the National Academy of Sciences and the Carnegie Corporation of New York. Any opinions, findings, conclusions, or recommendations expressed in this publication are those of the author(s) and do not necessarily reflect the views of the organizations or agencies that provided support for the project. International Standard Book Number-13:â 978-0-309-12707-3 International Standard Book Number-10:â 0-309-12707-6 A limited number of copies are available from the Office for Central Europe and Eur- asia, National Research Council, 500 Fifth Street, N.W., Washington, DC 20001; (202) 334-2376. Additional copies of this report are available from the National Academies Press, 500 Fifth Street, N.W., Lockbox 285, Washington, DC 20055; (800) 624-6242 or (202) 334-3313 (in the Washington metropolitan area); Internet, http://www.nap.edu. Copyright 2009 by the National Academy of Sciences. All rights reserved. Printed in the United States of America.

Preface This report presents the proceedings of the fourth U.S.-Russian interacad- emy workshop on the general theme of countering terrorism, which was held in Moscow in March 2007. The first report was published by the National Academy Press (now the National Academies Press) in 2002 under the title High Impact Terrorism: Proceedings of a Russian-American Workshop. The second report was published in 2004 under the title Terrorism: Reducing Vulnerabilities and Improving Responses: U.S.-Russian Workshop Proceedings. The third report was published in 2006 under the title Countering Urban Terrorism in Russia and the United States: Proceedings of a Workshop. The present report continues to explore topics related to urban terrorism but with a new emphasis on potential attacks involving biological agents, transportation networks, and energy systems. The Carnegie Corporation of New York has generously supported all four of the workshops and the preparation of the reports. Two other recent projects carried out as cooperative efforts of the National Academies and the Russian Academy of Sciences also deserve mention. They were closely linked to the activities reflected in the reports of the four workshops noted above. These two projects resulted in consensus reports also published by the National Academies Press entitled Biological Science and Biotechnology in Russia: Controlling Diseases and Enhancing Security, 2006, and U.S.-Russian Collaboration in Combating Radiological Terrorism, 2007. vii

viii PREFACE This report is organized into several sections. First, summary reports of dis- cussions at meetings of three interacademy working groups that were convened just before the workshop are presented. These working groups addressed bioter- rorism, transportation vulnerabilities, and energy system vulnerabilities. The agendas for the working groups and plenary sessions are included in Appendix A, along with a list of participants. Second, 18 papers that provided the basis for presentations during the working group discussions and workshop plenary ses- sions are set forth in their entirety. Appendix B identifies some important recent books and reports published in Russia that are highly relevant to the topics that were discussed. Finally, the presentation by a senior Russian government official, included in Appendix C, provides important perspectives that were taken into ac- count during the discussions. We hope that the discussions at the workshop will be of assistance to the two governments as they continue to develop the govern- mental frameworks for combating urban terrorism and approaches to international collaboration in this field. The amount of information that was exchanged during the meetings of the working groups, the plenary session of the workshop, and the related visits to organizations and facilities in the Moscow and St. Petersburg areas was exten- sive. The sampling of information presented in this report underscores the value of international exchanges in the rapidly expanding field of counterterrorism. Much of the information is of direct relevance in efforts to enhance national security awareness in both countries, and indeed throughout the international community. Acknowledgments This publication was made possible by a grant from the Carnegie Corpora- tion of New York. The Russian Academy of Sciences, in cooperation with other Russian organizations, did an excellent job in arranging all aspects of the visit to Russia. We express our sincere appreciation to the Carnegie Corporation and to all of the Russian organizations that were involved for their assistance. The statements made and views expressed in this report are solely the re- sponsibility of the authors and the rapporteur. They do not necessarily represent the positions of the planning committees, the Carnegie Corporation, the National Academies, the Russian Academy of Sciences, or other organizations where the authors are employed. This volume has been reviewed in draft form by individuals chosen for their technical expertise, in accordance with procedures approved by the National Research Councilâs Report Review Committee. The purpose of this independent review is to provide candid and critical comments that will assist the institution in making its published report as sound as possible and to ensure that the report meets institutional standards for quality. The review comments and draft manu- script remain confidential to protect the integrity of the process.

PREFACE ix We wish to thank the following individuals for their review of selected pa- pers and summary material: Edward Badolato, Integrated Infrastructure Analyt- ics, Inc.; Kavita Berger, American Association for the Advancement of Science; Mortimer Downey, PB Consult, Inc; Robert Gallamore, Northwestern University; Sanjay Jain, The George Washington University; Brian Lopez, Lawrence Liver- more National Laboratory; Neil Smelser, University of California, Berkeley; Amy Smithson, Monterey Institute of International Studies; Theofanis Theofanous, University of California, Santa Barbara; Alvin Trivelpiece, Retired, Oak Ridge National Laboratory; and Wm. A. Wulf, University of Virginia. Although the reviewers listed above have provided constructive comments and suggestions, they were not asked to endorse the content of the individual papers. Responsibility for the final content of the volume rests with the individual authors and the rapporteur. Special appreciation is extended to Kelly Robbins for her translation of many of the Russian language papers into English and for her assistance in edit- ing this report. Also, we appreciate the work of Jan Dee Summers in editing this volume. Siegfried S. Hecker Chair, Committee on Counterterrorism Challenges for Russia and the United States of the National Research Council Glenn E. Schweitzer Rapporteur Director, Office for Central Europe and Eurasia National Research Council 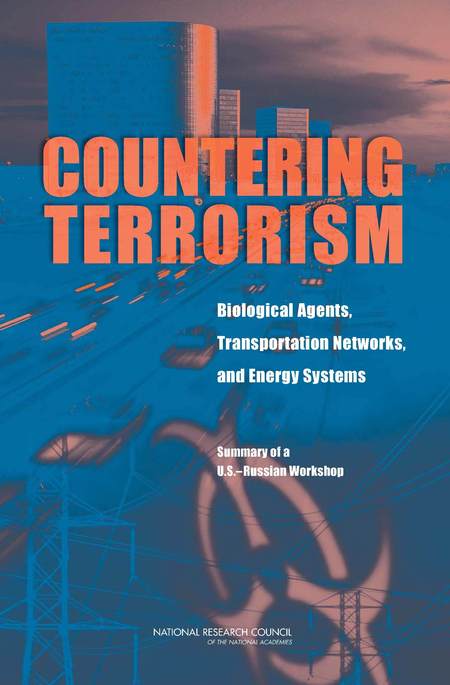 This book presents the proceedings of the fourth U.S.-Russian interacademy workshop on the general theme of countering terrorism, which was held in Moscow in March 2007. The fourth in a series, this volume continues to explore topics related to urban terrorism, but with a new emphasis on potential attacks involving biological agents, transportation networks, and energy systems.

The other books in the series include: