An Assessment of the National Institute of Standards and Technology Center for Neutron Research: Fiscal Year 2008 (2008)

Visit NAP.edu/10766 to get more information about this book, to buy it in print, or to download it as a free PDF.
Page i Share Cite
Suggested Citation:"Front Matter." National Research Council. 2008. An Assessment of the National Institute of Standards and Technology Center for Neutron Research: Fiscal Year 2008. Washington, DC: The National Academies Press. doi: 10.17226/12495.
×

AN ASSESSMENT OF THE NATIONAL INSTITUTE OF STANDARDS AND TECHNOLOGY CENTER FOR NEUTRON RESEARCH FISCAL YEAR 2008 Panel on Neutron Research Laboratory Assessments Board Division on Engineering and Physical Sciences THE NATIONAL ACADEMIES PRESS Washington, D.C. www.nap.edu

THE NATIONAL ACADEMIES PRESS 500 Fifth Street, N.W. Washington, DC 20001 NOTICE: The project that is the subject of this report was approved by the Governing Board of the National Research Council, whose members are drawn from the councils of the National Academy of Sciences, the National Academy of Engineering, and the Institute of Medicine. The members of the panel responsible for the report were chosen for their special competences and with regard for appropriate balance. This study was supported by Contract No. SB134106Z0011 between the National Academy of Sciences and the National Institute of Standards and Technology, an agency of the U.S. Department of Commerce. Any opinions, findings, conclusions, or recommendations expressed in this publication are those of the authors and do not necessarily reflect the views of the agency that provided support for the project. International Standard Book Number-13: 978-0-309-12725-7 International Standard Book Number-10: 0-309-12725-4 Copies of this report are available from Laboratory Assessments Board Division on Engineering and Physical Sciences National Research Council 500 Fifth Street, N.W. Washington, DC 20001 Additional copies of this report are available from the National Academies Press, 500 Fifth Street, N.W., Lockbox 285, Washington, DC 20055; (800) 624-6242 or (202) 334-3313 (in the Washington metropolitan area); Internet, http://www.nap.edu. Copyright 2008 by the National Academy of Sciences. All rights reserved. Printed in the United States of America

Acknowledgment of Reviewers This report has been reviewed in draft form by individuals chosen for their diverse perspectives and technical expertise, in accordance with procedures approved by the National Research Councilâs Report Review Committee. The purpose of this independent review is to provide candid and critical comments that will assist the institution in making its published report as sound as possible and to ensure that the report meets institutional standards for objectivity, evidence, and responsiveness to the study charge. The review comments and draft manuscript remain confidential to protect the integrity of the deliberative process. We wish to thank the following individuals for their review of this report: James Jackson, Provo, Utah, Glenn Knoll, University of Michigan, R.G. Hamish Robertson, University of Washington, Alton Romig, Sandia National Laboratories, and Sunil Sinha, University of California, San Diego. Although the reviewers listed above have provided many constructive comments and suggestions, they were not asked to endorse the conclusions or recommendations, nor did they see the final draft of the report before its release. The review of this report was overseen by Alton Slay, Warrenton, Virginia. Appointed by the National Research Council, he was responsible for making certain that an independent examination of this report was carried out in accordance with institutional procedures and that all review comments were carefully considered. Responsibility for the final content of this report rests entirely with the authoring panel and the institution. v

Next: Summary »
An Assessment of the National Institute of Standards and Technology Center for Neutron Research: Fiscal Year 2008 Get This Book
× 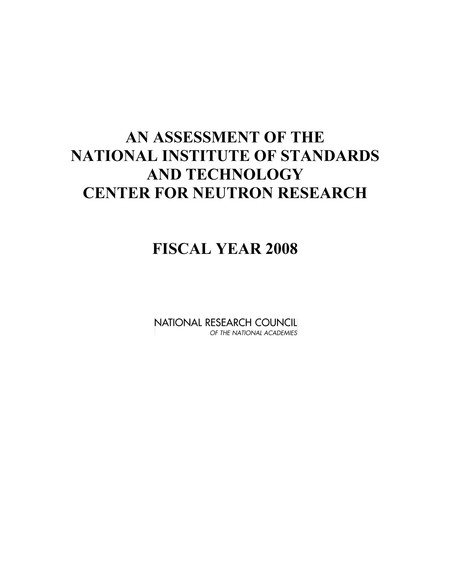 The National Institute of Standards and Technology [NIST] Center for Neutron Research (NCNR) is a national user facility whose mission is to ensure the availability of neutron measurement capabilities in order to meet the needs of U.S. researchers from industry, academia, and government agencies.

This book finds that NCNR is an extremely reliable and comprehensive neutron scattering facility. Even as the other neutron source in the nation-the Spallation Neutron Source (SNS)-becomes increasingly operational and the Oak Ridge High Flux Isotope Reactor (HFIR) comes back online, the NCNR will continue to be a vital resource for meeting the broad spectrum of user needs for and scientific objectives related to neutron scattering.