Visit NAP.edu/10766 to get more information about this book, to buy it in print, or to download it as a free PDF.
Page i Share Cite
Suggested Citation:"Front Matter." National Research Council. 2009. Acute Exposure Guideline Levels for Selected Airborne Chemicals: Volume 7. Washington, DC: The National Academies Press. doi: 10.17226/12503.
×

THE NATIONAL ACADEMIES PRESS 500 FIFTH STREET, NW WASHINGTON, DC 20001 NOTICE: The project that is the subject of this report was approved by the Governing Board of the National Research Council, whose members are drawn from the councils of the National Academy of Sciences, the National Academy of Engineering, and the Institute of Medicine. The members of the committee responsible for the report were chosen for their special competences and with regard for appropriate balance. This project was supported by Contract No. W81K04-06-D-0023 between the National Academy of Sciences and the U.S. Department of Defense. Any opinions, findings, conclu- sions, or recommendations expressed in this publication are those of the author(s) and do not necessarily reflect the view of the organizations or agencies that provided support for this project. International Standard Book Number-13: 978-0-309-12755-4 International Standard Book Number-10: 0-309-12755-6 Additional copies of this report are available from The National Academies Press 500 Fifth Street, NW Box 285 Washington, DC 20055 800-624-6242 202-334-3313 (in the Washington metropolitan area) http://www.nap.edu Copyright 2009 by the National Academy of Sciences. All rights reserved. Printed in the United States of America.

Ecological Indicators for the Nation (2000) Waste Incineration and Public Health (2000) Hormonally Active Agents in the Environment (1999) Research Priorities for Airborne Particulate Matter (four volumes, 1998-2004) The National Research Councilâs Committee on Toxicology: The First 50 Years (1997) Carcinogens and Anticarcinogens in the Human Diet (1996) Upstream: Salmon and Society in the Pacific Northwest (1996) Science and the Endangered Species Act (1995) Wetlands: Characteristics and Boundaries (1995) Biologic Markers (five volumes, 1989-1995) Science and Judgment in Risk Assessment (1994) Pesticides in the Diets of Infants and Children (1993) Dolphins and the Tuna Industry (1992) Science and the National Parks (1992) Human Exposure Assessment for Airborne Pollutants (1991) Rethinking the Ozone Problem in Urban and Regional Air Pollution (1991) Decline of the Sea Turtles (1990) Copies of these reports may be ordered from the National Academies Press (800) 624-6242 or (202) 334-3313 www.nap.edu ix

Preface Extremely hazardous substances (EHSs)2 can be released accidentally as a re- sult of chemical spills, industrial explosions, fires, or accidents involving railroad cars and trucks transporting EHSs. Workers and residents in communities surround- ing industrial facilities where EHSs are manufactured, used, or stored and in com- munities along the nationâs railways and highways are potentially at risk of being exposed to airborne EHSs during accidental releases or intentional releases by ter- rorists. Pursuant to the Superfund Amendments and Reauthorization Act of 1986, the U.S. Environmental Protection Agency (EPA) has identified approximately 400 EHSs on the basis of acute lethality data in rodents. As part of its efforts to develop acute exposure guideline levels for EHSs, EPA and the Agency for Toxic Substances and Disease Registry (ATSDR) in 1991 requested that the National Research Council (NRC) develop guidelines for estab- lishing such levels. In response to that request, the NRC published Guidelines for Developing Community Emergency Exposure Levels for Hazardous Substances in 1993. Subsequently, Standard Operating Procedures for Developing Acute Expo- sure Guideline Levels for Hazardous Substances was published in 2001, providing updated procedures, methodologies, and other guidelines used by the National Ad- visory Committee (NAC) on Acute Exposure Guideline Levels for Hazardous Sub- stances and the Committee on Acute Exposure Guideline Levels (AEGLs) in devel- oping the AEGL values. Using the 1993 and 2001 NRC guidelines reports, the NACâconsisting of members from EPA, the U.S. Department of Defense (DOD), the U.S. Department of Energy (DOE), the U.S. Department of Transportation (DOT), other federal and state governments, the chemical industry, academia, and other organizations from the private sectorâhas developed AEGLs for approximately 200 EHSs. In 1998, EPA and DOD requested that the NRC independently review the AEGLs developed by NAC. In response to that request, the NRC organized within its Committee on Toxicology (COT) the Committee on Acute Exposure Guideline Levels, which prepared this report. This report is the seventh volume in the series 2 As defined pursuant to the Superfund Amendments and Reauthorization Act of 1986. xi

xii Preface Acute Exposure Guideline Levels for Selected Airborne Chemicals. It reviews the AEGLs for acetone cyanohydrin, carbon disulfide, monochloroacetic acid, and phe- nol for scientific accuracy, completeness, and consistency with the NRC guideline reports. The committeeâs review of the AEGL documents involved both oral and writ- ten presentations to the committee by the NAC authors of the documents. The committee examined the draft documents and provided comments and recommenda- tions for how they could be improved in a series of interim reports. The authors revised the draft AEGL documents based on the advice in the interim reports and presented them for reexamination by the committee as many times as necessary until the committee was satisfied that the AEGLs were scientifically justified and consistent with the 1993 and 2001 NRC guideline reports. After these determina- tions have been made for an AEGL document, it is published as an appendix in a volume such as this one. Two interim reports of the committee that led to this report were reviewed in draft form by individuals selected for their diverse perspectives and technical exper- tise, in accordance with procedures approved by the NRCâs Report Review Com- mittee. The purpose of this independent review is to provide candid and critical comments that will assist the institution in making its published report as sound as possible and to ensure that the report meets institutional standards for objectivity, evidence, and responsiveness to the study charge. The review comments and draft manuscript remain confidential to protect the integrity of the deliberative process. We wish to thank the following individuals for their review of two of the com- mittteeâs interim reports, which summarize the committeeâs conclusions and rec- ommendations for improving NACâs AEGL documents for monochloroacetic acid and phenol (Thirteenth Interim Report of the Committee on Acute Exposure Guide- line Levels, 2005) and acetone cyanohydrin and carbon disulfide (Fourteenth In- terim Report of the Committee on Acute Exposure Guideline Levels, 2006): Deepak K. Bhalla (Wayne State University), David W. Gaylor (Gaylor and Associates, LLC), and Sam Kacew (University of Ottawa). Although the reviewers listed above have provided many constructive com- ments and suggestions, they were not asked to endorse the conclusions or recom- mendations, nor did they see the final draft of this volume before its release. The review of the interim report completed in 2005 was overseen by Sidney Green, Jr. (Howard University). The review of the interim report completed in 2006 was over- seen by Robert A. Goyer, professor emeritus, University of Western Ontario. Ap- pointed by the NRC, they were responsible for making certain that an independent examination of the interim reports were carried out in accordance with institutional procedures and that all review comments were carefully considered. Responsibility for the final content of this report rests entirely with the authoring committee and the institution. The committee gratefully acknowledges the valuable assistance provided by the following persons: Ernest Falke, Marquea D. King, Iris A. Camacho, and Paul Tobin (all from EPA); George Rusch (Honeywell, Inc.). The committee acknowl-

Preface xiii edges James J. Reisa, director of the Board on Environmental Studies and Toxicol- ogy, and Susan Martel, senior program officer for toxicology, for their helpful guid- ance. Kulbir Bakshi, project director for his work in this project, and Raymond Wassel for bringing the report to completion. Other staff members who contributed to this effort are Ruth Crossgrove (senior editor), Mirsada Karalic-Loncarevic (manager of the Technical Information Center), Radiah Rose (editorial projects manager), Aida Neel (program associate), and Korin Thompson (project assistant). Finally, we would like to thank all members of the committee for their expertise and dedicated effort throughout the development of this report. Donald E. Gardner, Chair Committee on Acute Exposure Guideline Levels 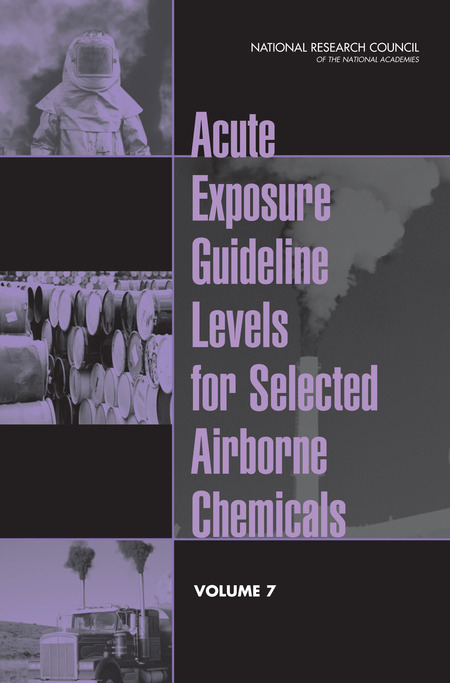 This book is the seventh volume in the series Acute Exposure Guideline Levels for Selected Airborne Chemicals, and includes AEGLs for acetone cyanohydrin, carbon disulfide, monochloroacetic acid, and phenol.

At the request of the Department of Defense, the National Research Council has reviewed the relevant scientific literature compiled by an expert panel and established Acute Exposure Guideline Levels (AEGLs) for 12 new chemicals. AEGLs represent exposure levels below which adverse health effects are not likely to occur and are useful in responding to emergencies such as accidental or intentional chemical releases in the community, the workplace, transportation, the military, and for the remediation of contaminated sites.