Visit NAP.edu/10766 to get more information about this book, to buy it in print, or to download it as a free PDF.
« Previous: 2 Use of the QMU Methodology
Page 34 Share Cite
Suggested Citation:"3 QMU and the Annual Assessment Review." National Research Council. 2009. Evaluation of Quantification of Margins and Uncertainties Methodology for Assessing and Certifying the Reliability of the Nuclear Stockpile. Washington, DC: The National Academies Press. doi: 10.17226/12531.
×

QMU AND THE ANNUAL ASSESSMENT REVIEW 35 however, QMU is explicitly applied only to the (assumed) single- most-important performance measure for each stockpile warhead. The 2007 annual assessment review was examined in depth by the committee. The use of QMU methodology in the annual assessment review is increasing, and that trend is expected to continue in 2008. The annual assessment reviews include discussions of issues involved in applying QMU and the different views of the national security laboratories where improvements are needed. In the 2007 annual assessment, uncertainty bands were developed using QMU formalism, whereas previously the labs had relied primarily on expert judgment. QMU has not yet been applied to safety, security, or human factors. In the 2007 assessment, QMU was used to determine how the value and uncertainty of the anticipated primary yield, Yp, compares with those of the minimum primary yield, Yp,min, required for stable second- ary performance. The national security laboratories have made a good start in apply- ing the QMU framework in the annual assessment reviews, but they acknowledge that they still have far to go. Margins, M, and uncertainties, U, should be reported for all critical performance gates. The committee asked the labs to provide briefings on the use of QMU in the annual assessment process for three specific weapons systems: B61 (Sandia), W88 (Los Alamos), and W80 (Livermore). The use of QMU in these systems is summarized in the following sections. SANDIA NATIONAL LABORATORIES In the 2007 annual assessment review, SNL used QMU to assess the firing systems and neutron generators of the B61 system under normal, abnormal, and hostile (e.g., high radiation) environments as a function of component age. It also reported on the use of QMU to analyze the strong link/weak link system for the qualification of the W76 and the B83. For the 2008 annual assessment review, SNL will use a technical basis review team to help identify high-priority components for analysis. SNL management reported that although its QMU assessments to date have been useful for obtaining a better understanding of margins, there is still a great deal of work to do to understand uncertainties. One senior manager noted that uncertainty quantification is a goal at this point, not a reality. SNL managers also reported that there is not much coordination among the national security laboratories on the selection of components for analysis except in one case: the degradation of neutron generators. Nevertheless, management noted that the use of QMU has had two notable impacts. First, it is allowing the lab to move away from determin-

36 evaluation of qmu methodology istic pass/fail criteria for component performance to more probabilistic criteria that address component performance as a function of age and other factors. Second, the shift to probabilistic approaches is also forcing the lab to reexamine the current bases for component performance requirements. LOS ALAMOS NATIONAL LABORATORY LANL briefed the committee on the application of QMU to assess margins and uncertainties in the primary and secondary of the W88. This system was designed for a high yield-to-weight ratio, which resulted in a small margin in the primary under the best of circumstances. The labora- tory also reported that it has used QMU to assess primary margins and uncertainties in the W76 and an abbreviated QMU analysis to evaluate one-point safety of the B53. The laboratory noted that QMU has had specific benefits. LANLâs application of QMU to the W88 primary resulted in two design changes that are expected to provide additional primary margin. Its use also allowed the laboratory to close a significant finding investigation (SFI) that had been open for 9 years. More generally, the use of QMU has motivated LANL to develop a common and transparent definition of minimum primary yield, Yp,min, and has also enabled the lab to calculate what it calls âstatistically defensibleâ uncertainty bands for Yp,min. LAWRENCE LIVERMORE NATIONAL LABORATORY LLNL briefed the committee on the use of QMU for the W80 system. (More information on this topic is included in Note 5 in the classified Annex.) The laboratory has applied QMU to the primary and secondary of the W80, especially to assess temperature- and aging-related effects on primary and secondary performance. This work has been carried out in collaboration with LANL, which originally designed the nuclear explo- sive package. LLNL reported that the use of QMU has had several benefits. On the W80, it resulted in a better understanding of margins and uncertainties in primary and secondary performance. It is also leading to the develop- ment of consistent approaches and definitionsâfor example, for Yp,min and uncertaintyâat the lab and is helping to prioritize the labâs work on weapons systems. Recommendation 2-1. The national security laboratories should continue to expand the application of QMU in annual assessments; â The B53 is no longer in the stockpile.

QMU AND THE ANNUAL ASSESSMENT REVIEW 37 in particular, M and U should be reported for more performance gates. In addition, the labs should investigate the benefits that cross-laboratory peer review of their use of QMU could provide for the annual assessment process. PERFORMANCE GATES The national security laboratories have made a good start in applying the QMU formalism, but they acknowledge that they still have far to go. An SNL representative, for instance, told the committee that it was âone percent QMU-izedâ as of summer 2007. M and U should be reported for all performance gates that are judged to be critical. (More information on this topic is included in Table B-1 in the classified Annex.) PEER REVIEW OPPORTUNITIES The annual assessment process today begins at the responsible national security laboratories (LANL, LLNL, Sandia-Livermore, and Â­ Sandia- Albuquerque), with detailed analysis by the design and engineering team, followed by internal review at several levels, including review by a red team that brings in members from the other national security labs and from outside the labs. The responsible lab director is continuously involved in the process, and the final assessment requires the lab directorâs approval; it is then presented to the Secretary of Energy. Independently, the Strate- gic Advisory Group/Stockpile Assessment Team (SAG/SAT) of the U.S. Strategic Command reviews the analysis by the design teams, together with DOD analysis, and presents its assessment to the Commander of the U.S. Strategic Command, who then reports to the Secretary of Defense. The two secretaries then transmit a letter to the President assessing the safety and reliability of the stockpile, along with a statement on the need for nuclear testing. It has been suggested that these assessments be augmented by further assessments that are as independent of the weapons laboratories as pos- sible and that are, to the extent possible, not lab-centric. The committee has considered this suggestion and offers the following observations. The expertise needed for the annual assessment of the nuclear explosive package resides primarily in the nuclear weapons science community. It â The SAG/SAT tasking is to conduct annual assessments of the safety, security, and reli- ability of the nuclear weapons stockpile and to advise on the possible need for nuclear test- ing. The SAG/SAT membership includes retired nuclear weapons physics and engineering designers, weapons production managers, and flag officers formerly responsible for nuclear weapons operations.

38 evaluation of qmu methodology is possible for an outside body to review the work approach used by the laboratories but not to perform its own analysis of lab-generated results. The committee notes that outside bodies (including SAG/SAT, which has retirees from the weapons-design community) do review the work. The committee is comfortable with outside bodies reviewing the approaches taken by the laboratories and advising them on alternatives; however, it believes that expert judgment remains an important ingredient of these assessments and that the required depth of expertise is found primarily in the nuclear weapons science community. The committee strongly favors the idea of cross-laboratory peer reviews as part of the laboratoriesâ assessments. Such peer review would augment current peer reviews internal to each laboratory and could bring a new level of independence, rigor, and confidence insofar as different codes, methodologies, and philosophies would be brought to bear on the assessment of a given warhead. This peer review should not dilute the three national security laboratoriesâ accountability for the annual assess- ment reviews.

Next: 4 Comparison and Contrast of the Use of QMU »
Evaluation of Quantification of Margins and Uncertainties Methodology for Assessing and Certifying the Reliability of the Nuclear Stockpile Get This Book
× 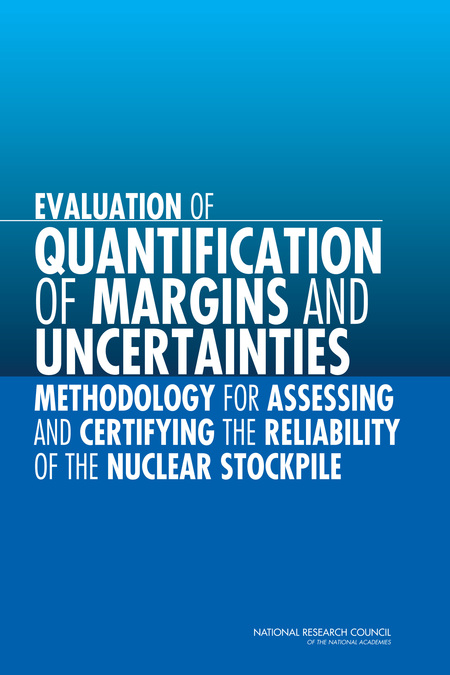