Visit NAP.edu/10766 to get more information about this book, to buy it in print, or to download it as a free PDF.
« Previous: Front Matter
Page 1 Share Cite
Suggested Citation:"Summary." National Research Council. 2009. Understanding Research, Science and Technology Parks: Global Best Practices: Report of a Symposium. Washington, DC: The National Academies Press. doi: 10.17226/12546.
×

Summary* Many nations are currently adopting a variety of directed strategies to launch and support the development of research parks, often with significant financial commitments and policy support. To meet the need for a better understanding of the scope and scale of programs overseas to support the growth and development of research parks and to improve our understanding of the scale and contributions of parks in the U.S. context, the National Academies convened an international conference on global best practices in research parks. This report of that confer- ence captures the rich discussion of the diverse roles university- and laboratory- based research parks play in national innovation systems. The presentations of the conference participants demonstrate the range of objectives and the substantial differences in scope and scale of activity characterizing research parks around the world, while also identifying common challenges. The conference included participants from countries as diverse as China, Singapore, India, the United Kingdom, France, Mexico, and Hungary. They described national efforts to develop research parks of significant scale and sci- entific and innovative potential. They noted that in many cases, these research parks are expected to generate benefits that go beyond regional development and job creation. As these participants observed, effective research parks have the potential to contribute to regional growth by facilitating innovation and forms *Caveat: It is important to note that this summary does not represent the statements and conclusions of the NRC Committee on Comparative Innovation Policy, but simply summarizes key points raised by participants of the conference. 

 UNDERSTANDING RESEARCH, SCIENCE AND TECHNOLOGY PARKS Box A What is a Research Park? Alternatively referred to as research parks, science parks, technology parks, technopoles, science centers, business innovation centers, and centers for ad- vanced technology, there appears to be no singular characterization of a research park. The International Association of Science Parks defines a Science Park as âan organisation managed by specialised professionals, whose main aim is to in- crease the wealth of its community by promoting the culture of innovation and the competitiveness of its associated businesses and knowledge-based institutions. To enable these goals to be met, a Science Park stimulates and manages the flow of knowledge and technology amongst universities, R&D institutions, companies and markets; it facilitates the creation and growth of innovation-based companies through incubation and spin-off processes; and provides other value-added ser- vices together with high quality space and facilities.âa aAccessed at <http://www.iasp.ws> on January 22, 2009. formation while enhancing the competitiveness of national firms, particularly in leading technological sectors. Research parks are seen increasingly around the world as a means to create dynamic clusters that accelerate economic growth and international competitive- ness. Specifically, research parks, of various sizes and types, are widely seen as an effective policy tool to realize larger and more visible returns on a nationâs investments in research and development. Most research parks seek to encour- age greater collaboration among universities, research laboratories, and large and small companies, in order to facilitate the conversion of new ideas into the in- novative technologies for the market. They are widely considered to be a proven tool to encourage the formation of innovative high-technology companies. They are also seen as an effective means to generate employment and to make existing companies more competitive through cooperative R&D, shared facilities, and the benefits derived from co-location. S&T Parks are a rapidly growing phenomenon and an increasingly com- mon tool of national and regional economic development. They are designed to: âSee, for example, the presentation by Dr. M. S. Ananth of the Indian Institute of Technology- M Â­ adras in the Proceedings section of this report. âSee, for example, the presentation by Zhu Shen on the Chinese strategy concerning research parks in the Proceedings section of this report. âSee, for example, the presentation by Yena Lim on Singaporeâs strategy in the Proceedings section of this report.

 UNDERSTANDING RESEARCH, SCIENCE AND TECHNOLOGY PARKS to be less appreciated by policymakers and the public in the United States. In the United States, support for research parks is principally undertaken by state and local governments with limited support by the federal government. 12 While research parks are highly varied, the conference nonetheless cap- tured some common elements characteristic of successful research parks. These âbest practicesâ include the presence of: â¢ Champions: Committed champions who match sustained, high-level attention with significant support for the growth and development of a research park.13 â¢ Leadership: Effective leadership and professional management to fa- cilitate networking among the entrepreneurs, researchers, investors, and others within and around the research parkâs innovation ecosystem.14 â¢ Funding: Designated and sustained public funding and active private par- ticipation, combined with effective public policies to support companies that seek to convert ideas into innovations and innovations into products for the market. 15 â¢ Bridging institutions: Such as the North Carolina Board on Science and Technology, that preserve the vision of the research park over the long period it takes for parks to mature and become successful.16 â¢ Soft infrastructure: This term captures the positive human capital built over many years of public investments in education and skills training, public policies that encourage an entrepreneurial culture, and the presence of networks among professionals.17 â¢ Metrics: Effective metrics to help management set clear goals and, over time, gauge the effectiveness of the research park.18 12â Seethe remarks by Prof. Phillip Phan in the Proceedings section of this report. 13â Dr.Richard Stulen drew attention to the role that effective high-level champions like Senator Bingaman have played in the growth of New Mexicoâs Sandia Science and Technology Park. 14â Clear goals, capable management, and sustained support are essential for the effective develop- ment of research parks, as documented in recent reviews by the National Research Council of the research parks affiliated with the NASA Ames Research Center and Sandia National Laboratories. See National Research Council, A Review of the New Initiatives at the NASA Ames Research Center, Charles W. Wessner, ed., Washington, DC: National Academy Press, 2001, and National Research Council, A Review of the Sandia Science and Technology Park Initiative, Charles W. Wessner, ed., Washington, DC: National Academy Press, 1999. 15â his keynote address, President Barker of Clemson University emphasized the instrumental role In played by the State of South Carolina as well as private donors like BMW in providing sustained support and the scale of funding needed to provide the ICAR âinstant scale and instant density.â See the presentation of James Barker in the Proceedings section of this report. 16â See the presentation by Robert McMahan in the Proceedings section of this report. 17â Describing the case of Singapore, Ms. Yena Lim noted that the government has over 40 years built a strong education system, raising the value of learning and rewarding scientific and engineering excellence. See the presentation by Yena Lim in the Proceedings section of this report. 18â See the presentations by Albert Link of the University of North Carolina and William Kittredge of the Department of Commerce in the Proceedings section of this report.

Next: I INTRODUCTION »
Understanding Research, Science and Technology Parks: Global Best Practices: Report of a Symposium Get This Book
× 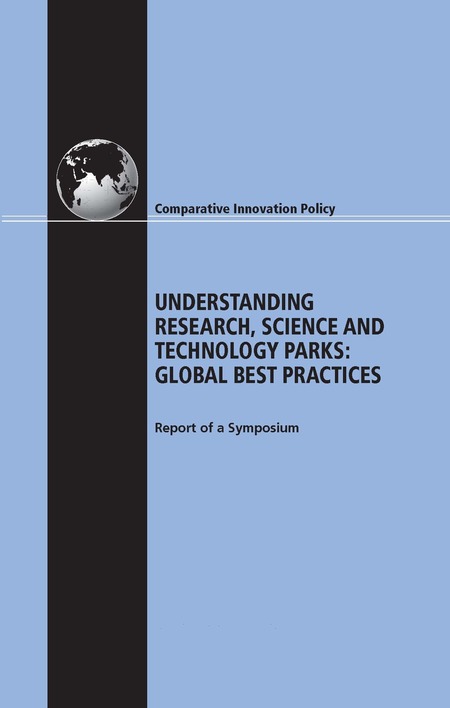 Many nations are currently adopting a variety of directed strategies to launch and support research parks, often with significant financial commitments and policy support. By better understanding how research parks of other nations operate, we can seek to improve the scale and contributions of parks in the U.S. To that end, the National Academies convened an international conference on global best practices in research parks.

This volume, a report of the conference, includes discussion of the diverse roles that research parks in both universities and laboratories play in national innovation systems. The presentations identify common challenges and demonstrate substantial differences in research park programs around the world.