Chapter:Appendix C: Background on the Roundtable/Commission on Scientific Communication and National Security

Visit NAP.edu/10766 to get more information about this book, to buy it in print, or to download it as a free PDF.
« Previous: Appendix B: The Committee on Science, Security, and Prosperity Biographies
Page 99 Share Cite
Suggested Citation:"Appendix C: Background on the Roundtable/Commission on Scientific Communication and National Security." National Research Council. 2009. Beyond 'Fortress America': National Security Controls on Science and Technology in a Globalized World. Washington, DC: The National Academies Press. doi: 10.17226/12567.
×

Appendix C Background on the Roundtable/ Commission on Scientific Communication and National Security In partnership with the Center for Strategic and International S Â­ tudies, the National Academies in 2003 established the Roundtable on Scientific Communication and National Security, representing a broad cross-section of the national security and scientific communities. The Roundtable provided a structured opportunity for the identification and discussion of the challenges posed by the potential conflicts between openness in science and requirements for enhanced national security. The roundtable formatâa neutral discussion forumâenabled members of diverse and sometimes opposing institutions to engage in a continuing dialogue, and it provided them with the opportunity to build ongoing relationships that could, over time, facilitate collaboration. Consistent with National Academiesâ policy, the roundtable did not make policy recommendations. At the same time, the Commission on Scientific Communication and National Security was created at the Center for Strategic and Interna- tional Studies with the same membership. Acting independently of the Roundtable, the Commission had the objective of generating actionable recommendations for public policy. The Commission produced two White Papers: Security Controls on Scientific Communication and the Conduct of Scientific Research (June 2005) and Security Controls on the Access of Foreign Scientists and Engineers to the United States (October 2005). Available at http://www.csis.org/media/csis/pubs/0506_cscans.pdfÂ and http://www.csis.org/Â­ media/csis/pubs/051005_whitepaper.pdf. 99

100 APPENDIX C Goals The roundtable convened four times over a two-year period to discuss and study these issues as well as other urgent and ongoing issues associated with the central relationship between advancements in science and the preservation of security. The specific aims of the col- laboration were: â¢ To foster dialogue between the science and technology and secu- rity communities as part of the process of formulating national policies regarding scientific collaboration and communication; â¢ To establish a focal point for unbiased and deliberative consid- eration of solutions to the dilemmas posed by balancing the need for open scientific communication with the need for protecting national and homeland security; and â¢ To propose policy-relevant research and analysis in this area. David Baltimore, then President of the California Institute of Tech- nology, and Harold Brown, former Secretary of Defense, co-chaired both the roundtable and the commission. The roundtable was dissolved in spring 2005 and was reconstituted the following fall as the Committee on Scientific Communication and National Security, a standing com- mittee of the National Research Council. David Baltimore and Robert Gates, then President of Texas A&M University, co-chaired the commit- tee until May 2007 and December 2006, respectively.

Next: Appendix D: Recent Studies and Initiatives Outside the National Academies »
Beyond 'Fortress America': National Security Controls on Science and Technology in a Globalized World Get This Book
× 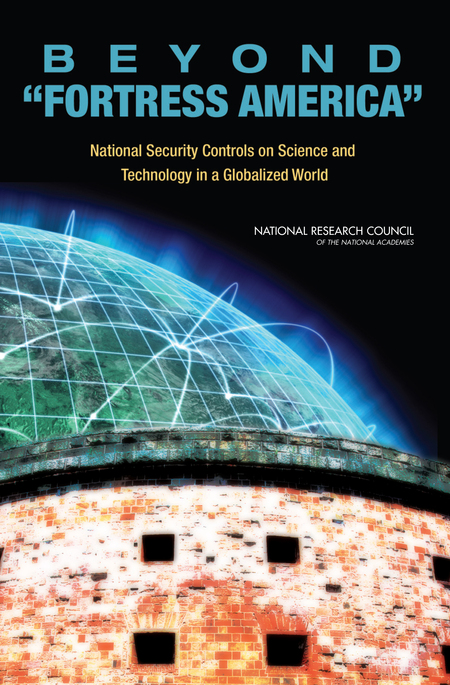