Visit NAP.edu/10766 to get more information about this book, to buy it in print, or to download it as a free PDF.
Page i Share Cite
Suggested Citation:"Front Matter." National Research Council. 2009. Mapping the Zone: Improving Flood Map Accuracy. Washington, DC: The National Academies Press. doi: 10.17226/12573.
×

The National Academies Press 500 Fifth Street, N.W. Washington, DC 20001 NOTICE: The project that is the subject of this report was approved by the Governing Board of the National Research Council, whose members are drawn from the councils of the National Academy of Sciences, the National Academy of Engineering, and the Institute of Medicine. The members of the committee responsible for the report were chosen for their special competences and with regard for appropriate balance. This study was supported by the Federal Emergency Management Agency under Award No. HSFE03-06-C- 0030 and by the National Oceanic and Atmospheric Administration under Award No. DG133R07SE2691. Any opinions, findings, conclusions, or recommendations expressed in this publication are those of the author(s) and do not necessarily reflect the view of the organizations or agencies that provided support for this project. International Standard Book Number-13:â 978-0-309-13057-8 (Book) International Standard Book Number-10:â 0-309-13057-3 (Book) International Standard Book Number-13:â 978-0-309-13058-5 (PDF) International Standard Book Number-10:â 0-309-13058-1 (PDF) Library of Congress Control Number:â 2009924737 Additional copies of this report are available from the National Academies Press, 500 Fifth Street, N.W., Lockbox 285, Washington, DC 20055; (800) 624-6242 or (202) 334-3313 (in the Washington metropolitan area); Internet, http://www.nap.edu. Cover:â June 2008 flooding in Cedar Rapids, Iowa (foreground), and a portion of the FEMA Flood Insurance Rate Map in the same region (background). This part of the downtown is within the Special Flood Hazard Area (zone A), which is subject to a 1 percent or greater chance of flooding in any given year. Photograph courtesy of Stephen Mally. Used with permission. Map extract from FEMAâs Map Service Center. Cover design by Van Nguyen. Copyright 2009 by the National Academy of Sciences. All rights reserved. Printed in the United States of America

Acknowledgment of Reviewers T his report has been reviewed in draft form by William Nechamen, New York State Department individuals chosen for their diverse perspectives of Environmental Conservation, Albany and technical expertise, in accordance with James Plasker, American Society for procedures approved by the NRCâs Report Review Photogrammetry and Remote Sensing, Committee. The purpose of this independent review is Bethesda, Maryland to provide candid and critical comments that will assist Kerry Smith, Arizona State University, Tempe the institution in making its published report as sound Jery Stedinger, University of Cornell, Ithaca, as possible and to ensure that the report meets institu- New York tional standards for objectivity, evidence, and respon- siveness to the study charge. The review comments Although the reviewers listed above have provided and draft manuscript remain confidential to protect the many constructive comments and suggestions, they integrity of the deliberative process. We wish to thank were not asked to endorse the conclusions or recom- the following individuals for their participation in the mendations nor did they see the final draft of the report review of this report: before its release. The review of this report was over- seen by Michael Goodchild, University of California, Gregory Baecher, University of Maryland, Santa Barbara, and Robert Dalrymple, Johns Hopkins College Park University, Baltimore, Maryland. Appointed by the Richard Bernknopf, United States Geological National Research Council, they were responsible for Survey, Menlo Park, California making certain that an independent examination of this Christopher Jones, Christopher Jones and report was carried out in accordance with institutional Associates, Durham, North Carolina procedures and that all review comments were carefully William Kirby, United States Geological Survey, considered. Responsibility for the final content of this retired, Reston, Virginia report rests entirely with the authoring committee and Richard Luettich, University of North Carolina, the institution. Chapel Hill xi

Next: Summary »
Mapping the Zone: Improving Flood Map Accuracy Get This Book
× 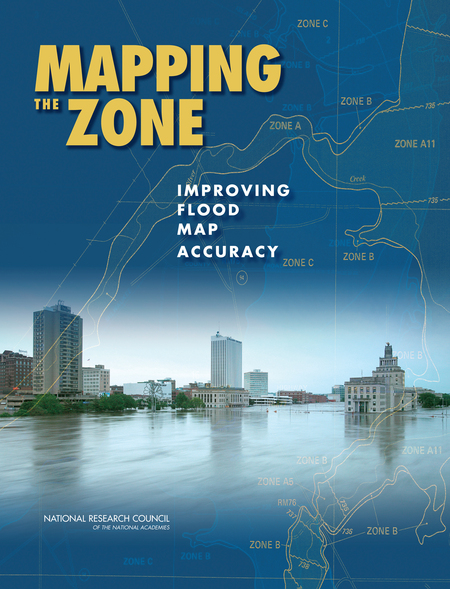 Federal Emergency Management Agency (FEMA) Flood Insurance Rate Maps portray the height and extent to which flooding is expected to occur, and they form the basis for setting flood insurance premiums and regulating development in the floodplain. As such, they are an important tool for individuals, businesses, communities, and government agencies to understand and deal with flood hazard and flood risk. Improving map accuracy is therefore not an academic question--better maps help everyone.

Making and maintaining an accurate flood map is neither simple nor inexpensive. Even after an investment of more than $1 billion to take flood maps into the digital world, only 21 percent of the population has maps that meet or exceed national flood hazard data quality thresholds. Even when floodplains are mapped with high accuracy, land development and natural changes to the landscape or hydrologic systems create the need for continuous map maintenance and updates.