Visit NAP.edu/10766 to get more information about this book, to buy it in print, or to download it as a free PDF.
Page i Share Cite
Suggested Citation:"Front Matter." National Research Council. 2009. Assessment of Planetary Protection Requirements for Mars Sample Return Missions. Washington, DC: The National Academies Press. doi: 10.17226/12576.
×

THE NATIONAL ACADEMIES PRESSâ 500 Fifth Street, N.W.â Washington, DC 20001 NOTICE: The project that is the subject of this report was approved by the Governing Board of the National Research Council, whose members are drawn from the councils of the National Academy of Sciences, the National Academy of Engineering, and the Institute of Medicine. The members of the committee responsible for the report were chosen for their special competences and with regard for appropriate balance. This study is based on work supported by Contract NNH06CE15B between the National Academy of Sciences and the National Aeronautics and Space Administration. Any opinions, findings, conclusions, or recommendations expressed in this publication are those of the author(s) and do not necessarily reflect the views of the agency that provided support for the project. Cover: Landforms in the Nilokeras Region of Mars and the crescent Earth (inset, upper right), as recorded by the High Reso- lution Imaging Science Experiment on the Mars Reconnaissance Orbiter. The main image, made by combining data recorded at near-infrared, red, and blue-green wavelengths, shows a swath of terrain approximately 1.2 kilometers in vertical extent. Image courtesy of NASA/JPL and the University of Arizona. The three inset images depict key phases in a sample return mis- sion, including entry, descent, and landing (left); launch of the samples from the surface of Mars into orbit about the planet (center); and retrieval of the sample canister in orbit about Mars for return to Earth (right). Images courtesy of NASA/JPL. Cover design by Penny E. Margolskee. International Standard Book Number-13: 978-0-309-13073-8 International Standard Book Number-10: 0-309-13073-5 Copies of this report are available free of charge from: Space Studies Board National Research Council 500 Fifth Street, N.W. Washington, DC 20001 Additional copies of this report can be purchased from the National Academies Press, 500 Fifth Street, N.W., Lockbox 285, Washington, DC 20055; (800) 624-6242 or (202) 334-3313 (in the Washington metropolitan area); Internet, http://www.nap. edu. Copyright 2009 by the National Academy of Sciences. All rights reserved. Printed in the United States of America

Other RECENT Reports of the Space Studies Board A Performance Assessment of NASAâs Heliophysics Program (Space Studies Board [SSB], 2009) Ensuring the Climate Record from the NPOESS and GOES-R Spacecraft: Elements of a Strategy to Recover Measurement Capabilities Lost in Program Restructuring (SSB, 2008) Launching Science: Science Opportunities Provided by NASAâs Constellation System (SSB, 2008) Opening New Frontiers in Space: Choices for the Next New Frontiers Announcement of Opportunity (SSB, 2008) Science Opportunities Enabled by NASAâs Constellation System: Interim Report (SSB with Aeronautics and Space Engineering Board [ASEB], 2008) Severe Space Weather EventsâUnderstanding Societal and Economic Impacts: A Workshop Report (SSB, 2008) Space Science and the International Traffic in Arms Regulations: Summary of a Workshop (SSB, 2008) United States Civil Space Policy: Summary of a Workshop (SSB with ASEB, 2008) Assessment of the NASA Astrobiology Institute (SSB, 2007) An Astrobiology Strategy for the Exploration of Mars (SSB with the Board on Life Sciences [BLS], 2007) Building a Better NASA Workforce: Meeting the Workforce Needs for the National Vision for Space Explora- tion (SSB with ASEB, 2007) Decadal Science Strategy Surveys: Report of a Workshop (SSB, 2007) Earth Science and Applications from Space: National Imperatives for the Next Decade and Beyond (SSB, 2007) Exploring Organic Environments in the Solar System (SSB with the Board on Chemical Sciences and Technol- ogy, 2007) Grading NASAâs Solar System Exploration Program: A Midterm Review (SSB, 2007) The Limits of Organic Life in Planetary Systems (SSB with BLS, 2007) NASAâs Beyond Einstein Program: An Architecture for Implementation (SSB with the Board on Physics and Astronomy [BPA], 2007) Options to Ensure the Climate Record from the NPOESS and GOES-R Spacecraft: A Workshop Report (SSB, 2007) A Performance Assessment of NASAâs Astrophysics Program (SSB with BPA, 2007) Portals to the Universe: The NASA Astronomy Science Centers (SSB, 2007) The Scientific Context for Exploration of the Moon (SSB, 2007) Limited copies of these reports are available free of charge from Space Studies Board National Research Council The Keck Center of the National Academies 500 Fifth Street, N.W., Washington, DC 20001 (202) 334-3477/ssb@nas.edu www.nationalacademies.org/ssb/ssb.html â NOTE: These reports are listed according to the year of approval for release, which in some cases precedes the year of publication. iv

Preface In a letter sent to Space Studies Board (SSB) Chair Lennard Fisk on February 6, 2008, S. Alan Stern, then NASAâs associate administrator for the Science Mission Directorate (SMD), explained that substantial increases in knowledge of Mars had rekindled interest in a Mars sample return mission both by NASA and within the inter- national space exploration community. In accordance with international treaty obligations, NASA maintains a planetary protection policy to avoid the biological contamination of other worlds as well as the potential for harmful effects on Earth from the return of extraterrestrial materials by spaceflight missions. Specific advice regarding the handling of samples returned to Earth from Mars is contained in the 1997 National Research Council (NRC) report Mars Sample Return: Issues and Recommendations. As NASA and other space agencies prepare for a future Mars sample return mission, it is appropriate to review the findings of the 1997 report and to update its recommenda- tions, taking into account current understanding of Marsâs biological potential as well as ongoing improvements in biological, chemical, and physical sample analysis capabilities and technologies. These considerations led Dr. Stern to request an examination of the 1997 Mars report, with particular reference to the following topics: â¢ The potential for living entities to be included in samples returned from Mars; â¢ Scientific investigations that should be conducted to reduce uncertainty in the above assessment; â¢ The potential for large-scale effects on Earthâs environment by any returned entity released to the environment; â¢ The status of technological measures that could be taken on a mission to prevent the inadvertent release of a returned sample into Earthâs biosphere; and â¢ Criteria for intentional sample release, taking note of current and anticipated regulatory frameworks. In response to this request, the ad hoc Committee on the Review of Planetary Protection Requirements for Mars Sample Return Missions was established in July 2008. The committee held its first meeting at Arizona State University in Tempe, Arizona, on August 12-14, 2008, to discuss the task it had been given and to hear relevant presentations. Additional discussions and presentations were heard at a second and final meeting held at the National Academy of Sciences in Washington, D.C., on September 8-10, 2008. A draft report was completed in early December and sent to external reviewers for commentary in mid-December. A new draft responding to the â National Research Council, Mars Sample Return: Issues and Recommendations, National Academy Press, Washington, D.C., 1997. vii

viii PREFACE reviewersâ comments was completed in late February 2009, and the report was approved in March 2009. The time between approval and release was spent in editing and production of the report. The work of the committee was made easier thanks to the important help, advice, and comments provided by numerous individuals from a variety of public and private organizations. These include the following: Karen Buxbaum (NASA, Jet Propulsion Laboratory), Philip Christensen (Arizona State University), Catharine Conley (NASA, Science Mission Directorate), Michael J. Daly (Uniformed Services University of the Health Sciences), Paul Davies (Arizona State University), Noel Hinners (Lockheed Martin Astronautics, retired), Bruce M. Jakosky (University of Colorado), Gigi Kwik-Gronvall (University of Pittsburgh Medical Center), James Nienow (Valdosta State University), John Priscu (Montana State University), John D. Rummel (East Carolina University), and Steven Squyres (Cornell University). This report has been reviewed in draft form by individuals chosen for their diverse perspectives and technical expertise, in accordance with procedures approved by the NRCâs Report Review Committee. The purpose of this independent review is to provide candid and critical comments that will assist the authors and the NRC in making its published report as sound as possible and to ensure that the report meets institutional standards for objectivity, evidence, and responsiveness to the study charge. The review comments and draft manuscript remain confidential to protect the integrity of the deliberative process. The committee wishes to thank the following individuals for their participation in the review of this report: Abigail Allwood, Jet Propulsion Laboratory; Michael H. Carr, U.S. Geological Survey (retired); Aaron Cohen, Texas A&M University; Kenneth H. Nealson, University of Southern California; Norman R. Pace, University of Colorado; Stefan Wagener, Canadian Science Centre for Human and Animal Health; and G.J. Wasserburg, Cali- fornia Institute of Technology. Although the reviewers listed above have provided many constructive comments and suggestions, they were not asked to endorse the conclusions or recommendations, nor did they see the final draft of the report before its release. The review of this report was overseen by Peter M. Banks, Astrolabe Venture Partners. Appointed by the NRC, he was responsible for making certain that an independent examination of this report was carried out in accordance with institutional procedures and that all review comments were carefully considered. Responsibility for the final content of this report rests entirely with the authoring committee and the institution.

Next: Summary »
Assessment of Planetary Protection Requirements for Mars Sample Return Missions Get This Book
× 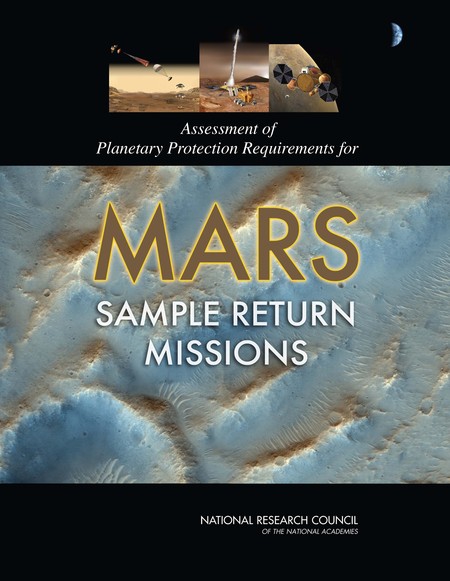