Visit NAP.edu/10766 to get more information about this book, to buy it in print, or to download it as a free PDF.
Page i Share Cite
Suggested Citation:"Front Matter." Institute of Medicine. 2009. Live Variola Virus: Considerations for Continuing Research. Washington, DC: The National Academies Press. doi: 10.17226/12616.
×

THE NATIONAL ACADEMIES PRESSâ 500 Fifth Street, N.W.â Washington, DC 20001 NOTICE: The project that is the subject of this report was approved by the Governing Board of the National Research Council, whose members are drawn from the councils of the National Academy of Sciences, the National Academy of E Â­ ngineering, and the Institute of Medicine. The members of the committee respon- sible for the report were chosen for their special competences and with regard for appropriate balance. This study was supported by Contract No. BOGH-H-07-05-A between the National Academy of Sciences and the Centers for Disease Control and Prevention. Funds originated with both the Centers for Disease Control and Prevention and the Office of the Biomedical Advanced Research and Development Authority of the U.S. Department of Health and Human Services. Any opinions, findings, conclusions, or recommendations expressed in this publication are those of the author(s) and do not necessarily reflect the view of the organizations or agencies that provided support for this project. International Standard Book Number-13: 978-0-309-13690-7 International Standard Book Number-10: 0-309-13690-3 Additional copies of this report are available from the National Academies Press, 500 Fifth Street, N.W., Lockbox 285, Washington, DC 20055; (800) 624-6242 or (202) 334-3313 (in the Washington metropolitan area); Internet http://www.nap.edu. For more information about the Institute of Medicine, visit the IOM home page at: www.iom.edu. Copyright 2009 by the National Academy of Sciences. All rights reserved. Printed in the United States of America Front cover: Reprinted with Permission by Luke Jerram, Artist in Residence at FACT, Liverpool for European Capital of Culture 2008. The serpent has been a symbol of long life, healing, and knowledge among almost all cultures and religions since the beginning of recorded history. The serpent adopted as a logotype by the Institute of Medicine is a relief carving from ancient Greece, now held by the Staatliche Museen in Berlin. Suggested citation: IOM (Institute of Medicine). 2009. Live Variola Virus: Consider- ations for Continuing Research. Washington, DC: The National Academies Press.

Reviewers T his report has been reviewed in draft form by individuals chosen for their diverse perspectives and technical expertise, in accordance with procedures approved by the National Research Councilâs Report Review Committee. The purpose of this independent review is to provide candid and critical comments that will assist the institution in making its published report as sound as possible and to ensure that the report meets institutional standards for objectivity, evidence, and responsiveness to the study charge. The review comments and draft manuscript remain confiden- tial to protect the integrity of the deliberative process. We wish to thank the following individuals for their review of this report: Kenneth I. Berns, University of Florida Genetics Institute R. Mark L. Buller, Department of Molecular Microbiology and Immunology, St. Louis University Health Sciences Center R. Alta Charo, University of Wisconsin Law School Lawrence Corey, Vaccine and Infectious Disease Institute, Fred Hutchinson Cancer Research Center and Virology Department, University of Washington Kathryn M. Edwards, Department of Pediatrics, Vanderbilt University School of Medicine William M. Egan, PharmaNet Consulting Joseph J. Esposito, JGL Tech-consult Thomas Inglesby, Center for Biosecurity, University of Pittsburgh Medical Center vii

viii REVIEWERS W. Ian Lipkin, Center for Infection and Immunity, Mailman School of Public Health, Columbia University D. Grant McFadden, Department of Molecular Genetics and Microbiology, University of Florida College of Medicine Philip K. Russell, Major General (retired) USA, Professor Emeritus, Johns Hopkins School of Public Health Ronald K. St. John, St. John Public Heath Consulting International Inc., Ontario Robert Swanepoel, Special Pathogens Unit, National Institute for Communicable Diseases, South Africa Richard Whitley, Department of Pediatrics and Microbiology, University of Alabama Although the reviewers listed above have provided many constructive comments and suggestions, they were not asked to endorse the conclusions or recommendations nor did they see the final draft of the report before its release. The review of this report was overseen by Dr. Floyd E. Bloom, Pro- fessor Emeritus, Department of Molecular and Integrative, Neuroscience, The Scripps Research Institute, and Dr. Adel A.F. Mahmoud, Woodrow Wilson School and Department of Molecular Biology, Princeton University. Appointed by the National Research Council and Institute of Medicine, they were responsible for making certain that an independent examination of this report was carried out in accordance with institutional procedures and that all review comments were carefully considered. Responsibility for the final content of this report rests entirely with the authoring committee and the institution.

Preface S mallpox is caused by variola virus, which modern genomics reveals to be very closely related to vaccinia and other orthopoxviruses. These similarities mean that vaccination protects against smallpox, as Edward Jenner observed in the late eighteenth century. Transmission of variola in the human population, its only natural host, was halted in the twentieth century through the dedicated efforts of public health workers and volunteers on every continent. Smallpox was declared eradicated by the World Health Assembly in 1980, a moment that is recognized as one of the most important achievements of mankind. In the course of the smallpox eradication campaign, laboratories that held variola virus isolates or clinical specimens that might contain infectious virus destroyed the materials or sent them to one of two repositories that were established in the United States and Russia under the direction of the World Health Organization (WHO). Since then, the World Health Assem- bly has debated whether the live variola virus stocks or other potentially infectious materials collected at these two repositories should be destroyed. The World Health Assembly will take up the issue of the retention or destruction of live variola virus stocks in 2010. Therefore, the Institute of Medicine (IOM) was asked by the Centers for Disease Control and Preven- tion and the Office of the Biomedical Advanced Research and Development Authority of the U.S. Department of Health and Human Services to form a committee that would conduct a study on the continued use of live variola virus for research and public health purposes. ix

 PREFACE This committeeâs work follows upon that of an earlier IOM committee that was formed in 1998 to assess future scientific needs for live variola virus. The previous committeeâs deliberations were undertaken in prepara- tion for the 1999 meeting of the World Health Assembly, which was to address what should be done with the variola stocks being maintained at the Centers for Disease Control and Prevention in the United States and at the State Centre for Research of Virology and Biotechnology (VECTOR) in Russia. In 1999, the IOM committee released its report, Assessment of Future Scientific Needs for Live Variola Virus, in which it offered a number of consensus conclusions. These conclusions focused particularly on the uses of live variola virus for developing medical countermeasures against smallpox. At that time, the World Health Assembly chose to defer its deci- sion on destroying the variola stocks until such research could be conducted in the future. In the interim, WHO has been responsible for overseeing all research involving live variola virus, which has been allowed only under the highest level of biosafety containment at the two WHO Collaborating Centers for Smallpox and Other Poxviruses. In this context, the present committee undertook an examination of the scientific needs for live variola virus, based on a critical assessment of the research that has been reported in the decade since the first IOM report was published. It is important to note that this committee, like its 1999 counterÂ­part, was not asked to consider whether the stocks should be retained or destroyed, nor was it charged with evaluating the risks of an accidental or intentional release of variola virus. To address its charge, the committee organized two workshops for p Â­ ublic presentations by leading experts, including those with experience from the smallpox eradication campaign, investigators who have done basic and applied research with live variola virus, and others who addressed t Â­ opics relevant to the committeeâs task. The committee members also reviewed the scientific literature related to variola and other poxviruses in their specific areas of expertise and summarized their findings for the com- mittee. The committee formally requested from VECTOR information on a range of aspects of their variola-related research. Professor Ilya G. Drozdov, D Â­ irector-General, Head, WHOCC for Orthopoxvirus Diagnosis and Repos- itory for Variola Virus Strains and DNA, provided extensive information on accomplishments at VECTOR over the past decade that have been cited in the report. The workshops and the analysis of the literature served as the background for extensive discussions and the development of conclusions by the committee in the course of three convened meetings. Through its deliberations, the committee reached consensus on the circumstances under which live variola virus would be essential and Â­others under which it would be useful for research or public health purposes, as

PREFACE xi presented in this report. The report is intended to provide information about what has been accomplished since the 1999 IOM committeeâs assess- ment and to offer recommendations to basic and clinical researchers, policy makers, and the public regarding the scientific uses of live variola virus in the contemporary context. Ann M. Arvin, Chair Committee on the Assessment of Future Scientific Needs for Live Variola Virus

Acknowledgments T he committee and the Institute of Medicine wish to express their appreciation to the many individuals who took the time to share their expert knowledge and perspectives with the committee in the course of its work and to the organizations that provided necessary information. The committee would like to thank the following individuals for their presentations at the public workshops: Kenneth Berns, Paul Chaplin, Inger Damon, Joseph Esposito, Donald Henderson, Lisa Hensley, Sally Â­Hojvat, Dennis Hruby, Peter Jahrling, Kevin Karem, Daniel Lavanchy, Grant M Â­ cFadden, Michael Merchlinsky, Hermann Meyer, Bernard Moss, Gerald Parker, Anne Rimoin, Kate Rubins, Barbara Styrt, and Richard Whitley. The committee would like to thank Professor Ilya G. Drozdov, Â­Director-General, Head, WHOCC for Orthopoxvirus Diagnosis and Repository for Variola Virus Strains and DNA, for his detailed response to its Â­inquiries concerning the variola-associated work that has been conducted at VECTOR. The committeeâs work could not have been completed without the skilled professional support of the Institute of Medicine staff. We are grate- ful to Allison Brantley, Patrick Kelley, Carly Langlais, Katherine McClure, and Deepali Patel. xiii

Next: Summary »
Live Variola Virus: Considerations for Continuing Research Get This Book
× 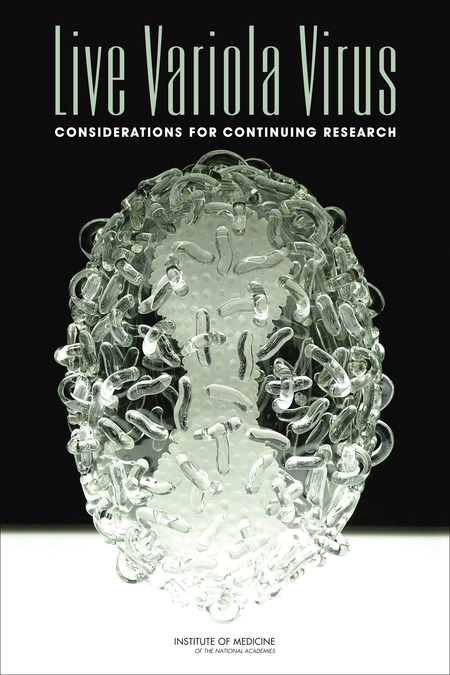 Smallpox was a devastating disease that decimated human populations for centuries, and its eradication in 1980 was a monumental achievement for the global health community. Since then the remaining known strains of its causative agent, variola virus, have been contained in two World Health Organization (WHO)-approved repositories.

In 1999, the World Health Assembly (WHA) debated the issue of destroying these remaining strains. Arguments were presented on the need to retain the live virus for use in additional important research, and the decision to destroy the virus was deferred until this research could be completed. In that same year, the Institute of Medicine (IOM) convened a consensus committee to explore scientific needs for the live virus.

In the ten years since the first IOM report, the scientific, political, and regulatory environments have changed. In this new climate, the IOM was once again tasked to consider scientific needs for live variola virus. The committee evaluated the scientific need for live variola virus in four areas: development of therapeutics, development of vaccines, genomic analysis, and discovery research.