Get This Book
Visit NAP.edu/10766 to get more information about this book, to buy it in print, or to download it as a free PDF.
« Previous: Appendix D: Description of State Renewables Portfolio Standards
Page 357 Share Cite
Suggested Citation:"Appendix E: Attributes of Life-Cycle Assessment." National Academy of Sciences, National Academy of Engineering, and National Research Council. 2010. Electricity from Renewable Resources: Status, Prospects, and Impediments. Washington, DC: The National Academies Press. doi: 10.17226/12619.
×

While it is the intention of all life-cycle assessments (LCAs) to cover technologies from “cradle to grave” in a systematic way, there is significant variability in the assumptions, boundaries, and methodologies used in these assessments. Therefore, comparisons of LCAs should be done with caution; each is an approximation of a technology’s actual impact. A major complication in comparing LCAs is that there is no set standard by which such analyses are carried out. There are two basic kinds of LCAs: economic input/output (EIO) and process analysis (PA). PA can be thought of as a “bottom-up” approach in which specific information for the energy and emissions associated with each component of the technology is determined and then combined to obtain a complete life-cycle impact. In addition to being very time intensive, the PA can be limited in its utility by the fact that there is often a lack of information concerning one or more components of the technology, and this can lead to truncation errors.

EIO, on the other hand, does not track individual components, but instead uses economy sector level data to quantify the relationship between energy and the materials and processes produced. As compared to PA, EIO can be thought of as being a “top-down” approach. While having the advantage of being less time and data intensive, the EIO is limited in its accuracy by its dependence on highly aggregated data that may or may not be appropriate for the specific process or material being considered.

Recent investigations suggest that EIO analyses tend to give higher energy use and emissions estimates than does PA, perhaps because PA is only able to consider the subset of processes for which data are available (Fthenakis and Kim, 2007; Odeh and Cockerill, 2008). A third method, sometimes referred to as

the “hybrid” LCA, attempts to address this issue by combining aspects of both techniques: using the PA approach where specific data are available and the EIO method where such data are not available.

To provide a coherent and consistent framework for LCAs, various agencies have compiled life-cycle inventory (LCI) databases that list the materials and energy inputs required for various technologies. For example, ECLIPSE (Frankl et al., 2004) is a LCI assessment project developed in Europe that looks at emissions and resource consumption. Other PA-type LCI databases include DEAM (Ecobilan, 2001), Franklin (Franklin Associates, 2008), and Ecoinvent (Pre Consultants, 2007b). EIO analyses typically rely on economic databases that are compiled by governmental bodies. For example, in the United States, the Department of Commerce generates data on air emission and water and energy use for 485 commodity sectors from various data sources.

Beyond the choice of LCA method and LCI database, there are any number of other factors that can affect LCA results and cause discrepancies among analyses. Assumptions about power plant capacity (or lifetime output), plant life expectancy, and energy infrastructure influence LCA results. In general, when comparing installations of the same energy technology, those with longer plant life expectancies and greater electrical output to the grid will have lower lifetime emissions per unit of electricity.

The nature of the underlying energy structure that supports the manufacture, operation, and dismantling of a given facility are also quite important. For example, the construction of a wind turbine in Sweden where much of the energy is produced using renewable sources will generally have less embedded CO2 emissions than the same turbine produced in the United States, where coal-fired power plants generate a significant fraction of the electricity available on the grid.

A further source of discrepancies for LCAs arises from the fact that these assessments are aimed at technologies that are often undergoing continuous modification and improvement. Comparisons cited here of an LCA for a given technology may differ because the technology under consideration evolved over the period from one LCA to another. This is especially true for solar and wind technologies where the ongoing rate of innovations is quite rapid. A further complication arises from the fact that some LCAs assess impacts for a hypothetical, future installation of the technology.

Another shortcoming of LCA is that it addresses only a single environmental impact. If one is in the position of choosing one technology over another, it would be desirable to have a more integrated understanding of the overall environmental

The main criticism of environmental valuation methods is of the step where disparate effects of LCAs are weighted and normalized into a single value per technology. Often the development of a single value is not adequate to capture the complexities of a technology, and metrics like “willingness to pay” can vary over time. For this reason we limit our discussion to LCA results.

Pre Consultants. 2007a. Available at http://www.pre.nl/eco-indicator99.

Pre Consultants. 2007b. Available at http://www.pre.nl/ecoinvent/.

Next: Appendix F: Atmospheric Emissions from Fossil-Fuel and Nuclear Electricity Generation »
Electricity from Renewable Resources: Status, Prospects, and Impediments Get This Book
× 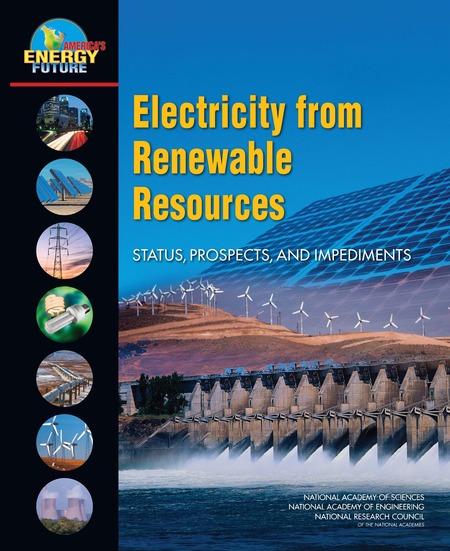 A component in the America's Energy Future study, Electricity from Renewable Resources examines the technical potential for electric power generation with alternative sources such as wind, solar-photovoltaic, geothermal, solar-thermal, hydroelectric, and other renewable sources. The book focuses on those renewable sources that show the most promise for initial commercial deployment within 10 years and will lead to a substantial impact on the U.S. energy system.

A quantitative characterization of technologies, this book lays out expectations of costs, performance, and impacts, as well as barriers and research and development needs. In addition to a principal focus on renewable energy technologies for power generation, the book addresses the challenges of incorporating such technologies into the power grid, as well as potential improvements in the national electricity grid that could enable better and more extensive utilization of wind, solar-thermal, solar photovoltaics, and other renewable technologies.