Visit NAP.edu/10766 to get more information about this book, to buy it in print, or to download it as a free PDF.
Page i Share Cite
Suggested Citation:"Front Matter." National Research Council. 2009. Russian Views on Countering Terrorism During Eight Years of Dialogue: Extracts from Proceedings of Four U.S.-Russian Workshops. Washington, DC: The National Academies Press. doi: 10.17226/12629.
×

THE NATIONAL ACADEMIES PRESSâ 500 Fifth Street, N.W.â Washington, DC 20001 NOTICE: The project that is the subject of this report was approved by the Governing Board of the National Research Council, whose members are drawn from the councils of the National Academy of Sciences, the National Academy of Engineering, and the Institute of Medicine. The members of the committee responsible for the report were chosen for their special competences and with regard for appropriate balance. Any opinions, findings, conclusions, or recommendations expressed in this publication are those of the author(s) and do not necessarily reflect the views of the organizations or agencies that provided support for the project. International Standard Book Number 13:â 978-0-309-13757-7 International Standard Book Number 10:â 0-309-13757-8 A limited number of copies are available from the Office for Central Europe and Eur- asia, National Research Council, 500 Fifth Street, N.W., Washington, DC 20001; (202) 334-2376. Additional copies of this report are available from the National Academies Press, 500 Fifth Street, N.W., Lockbox 285, Washington, DC 20055; (800) 624-6242 or (202) 334-3313 (in the Washington metropolitan area); Internet, http://www.nap.edu. Copyright 2009 by the National Academy of Sciences. All rights reserved. Printed in the United States of America.

Preface In June 1999, the presidents of the National Academy of Sciences (NAS) and the Russian Academy of Sciences agreed that a joint project on combating espe- cially dangerous crimes, particularly terrorism, would be of considerable interest to both Russian and American specialists in a variety of fields. The president of the NAS requested the president of the National Academy of Engineering to as- sume responsibility for developing and implementing the project. Representatives of the Institute of Medicine became involved in the project shortly thereafter. During the eight years that followed, several inter-academy planning meet- ings and four inter-academy workshops were held on various aspects of counter- ing terrorism. The workshops were carried out under the leadership of Siegfried Hecker of Stanford University and Yevgeny Velikhov of Kuzchatov Institute of Atomic Energy. Site visits to relevant Russian government offices and facilities involved in countering terrorism followed each of the workshops. The Carnegie Corporation of New York provided generous financial support for these activities. Proceedings of the workshops have been published as follows: High Impact Terrorism: Proceedings of a Russian-American Workshop, June 2001, National Academy Press, 2002 

vi PREFACE TerrorismâReducing Vulnerabilities and Improving Responses: U.S.- Russian Workshop Proceedings, March 2003, The National Academies Press, 2004 Countering Urban Terrorism in Russia and the United States: Proceedings of a Workshop, January 2005, The National Academies Press, 2006 Countering TerrorismâBiological Agents, Transportation Networks, and Energy Systems: Summary of a U.S.-Russian Workshop, March 2007, The National Academies Press, 2009 This volume is a compilation of a number of the Russian papers included in the aforementioned proceedings. It should be of interest to U.S. specialists as well as to specialists from other countries who are working in the field of counter-terrorism, but who may not have ready access to the information that is presented. As demonstrated in the papers, Russia has been and should continue to be an important participant in global efforts to combat terrorism domestically and internationally. The papers are organized according to the workshops where they were pre- sented. The proceedings for each of the workshops contain additional Russian papers, all of the American papers, and reports of working groups, and can be found online at www.nap.edu. Glenn Schweitzer, Director Office for Central Europe and Eurasia

Contents Papers from High Impact Terrorism: Proceedings of a Russian-American Workshop (2002) Cooperation Among Ministries of Internal Affairs of CIS Member States in the Fight Against Terrorism and Other Manifestations of Extremism 3 Igor L. Dimitrov Russian Legislation and the Struggle Against Terrorism 9 Mikhail P. Kireev Selected Technologies and Procedures Intended to Restrict Unauthorized Access to Explosives 19 Bronislav V. Matseevich Bioterrorism: A View from the Side 23 Oleg S. Morenkov Electromagnetic Terrorism 31 Yury V. Parfyonov vii

viii CONTENTS Russian Legislation and the Fight Against Terrorism 35 Viktor E. Petrishchev Could Terrorists Produce Low-Yield Nuclear Weapons? 47 Stanislav Rodionov Problems of Biological Security in Agriculture 51 Georgy A. Safonov and Vladimir A. Gavrilov International Centers as a Basis for Controlling Infectious Disease and Countering Bioterrorism 61 Lev S. Sandakhchiev (Deceased), Sergey V. Netesov, and Raisa A. Martynyuk The Role of Internal Affairs Agencies in Efforts to Fight Terrorism Under High-Technology Conditions 71 Oleg A. Stepanov Papers from TerrorismâReducing Vulnerabilities and Improving Responses: U.S.-Russian Workshop Proceedings (2004) Analysis of the Threats and Consequences of Terrorist Acts in Urban Settings: Outline of a Protection System 81 Vladimir Z. Dvorkin Lessons Learned from the Nord-Ost Terrorist Attack in Moscow from the Standpoint of Russian Security and Law Enforcement Agencies 93 Yevgeny A. Kolesnikov Technical Protection of Electronic Documents in Computer Systems 103 Valery A. Konyavsky International Aspects of Creating a State System for Countering the Illegal Circulation of Radioactive Materials in the Russian Federation 115 Vladimir M. Kutsenko Computer Security Training for Professional Specialists and Other Personnel Associated with Preventing and Responding to Computer Attacks 119 Anatoly A. Malyuk, Nikolai S. Pogozhin, and Aleksey I. Tolstoy Medical Aspects of Combating Acts of Bioterrorism 129 Gennady G. Onishchenko

CONTENTS ix Certain Aspects Regarding the Development of Conditions Favorable to Cyberterrorism and the Main Areas of Cooperation in the Struggle Against It 133 Igor A. Sokolov and Vladimir I. Budzko The Role of the Russian Ministry of Internal Affairs in Combating Terrorism in Urban Conditions 141 Sergey A. Starostin The Role of the Russian Ministry of Emergency Situations and Executive Branch Agencies of the City of Moscow in Dealing with Emergency Situations Arising from Acts of Terrorism 153 Aleksandr M. Yeliseev Papers from Countering Urban Terrorism in Russia and the United States: Proceedings of a Workshop (2006) Unauthorized Use of Radiation Sources: Measures to Prevent Attacks and Mitigate Consequences 161 Leonid Bolshov, Rafael Arutyunyan, Elena Melikhova, and Oleg Pavlovsky Special Characteristics of Firefighting in Urban Areas 179 Nikolay P. Kopylov On the Events in Beslan 199 Gennady Kovalenko Terrorist Acts in Moscow: Experience and Lessons in Eliminating Their Consequences 215 Aleksandr Yu. Kudrin Methodology for Assessing the Risks of Terrorism 221 Nikolay A. Makhutov Cybercrime and the Training of Specialists to Combat It in Russia 237 Nikolay V. Medvedev On Efforts to Counter International Terrorism in the Russian Federation and Possible Areas of U.S.-Russian Cooperation in this Area 247 Valentin A. Sobolev

Next: Papers from *High Impact Terrorism: Proceedings of a Russian-American Workshop* (2002) »
Russian Views on Countering Terrorism During Eight Years of Dialogue: Extracts from Proceedings of Four U.S.-Russian Workshops Get This Book
× 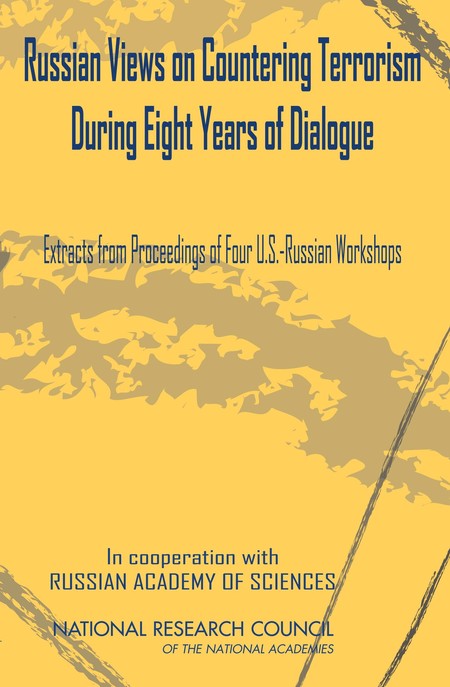 Few countries have endured as many attacks of terrorism during the past two decades as has Russia. From bombings on the streets of a number of cities, to the disruption of pipelines in Dagestan, to the taking of hundreds of hostages at a cultural center in Moscow and at a school in Beslan, the Russian government has responded to many political and technical challenges to protect the population. The measures that have been undertaken to reduce vulnerabilities to terrorist attacks and to mitigate the consequences of attacks have been of widespread interest in many other countries as well.

In June 1999, the Presidents of the National Academy of Sciences and the Russian Academy of Sciences initiated an inter-academy program to jointly address common interests in the field of counter-terrorism. Four workshops were held from 2001 to 2007 and additional consultations were undertaken prior to and after the series of workshops. This report includes 35 of the Russian presentations during the workshop series. Collectively they provide a broad overview of activities that have been supported by Russian institutions.