Visit NAP.edu/10766 to get more information about this book, to buy it in print, or to download it as a free PDF.
Page i Share Cite
Suggested Citation:"Front Matter." National Research Council. 2009. Sustainable Critical Infrastructure Systems: A Framework for Meeting 21st Century Imperatives: Report of a Workshop. Washington, DC: The National Academies Press. doi: 10.17226/12638.
×

SUSTAINABLE CRITICAL INFRASTRUCTURE SYSTEMS A FRAMEWORK FOR MEETING 21ST CENTURY IMPERATIVES Report of a Workshop Toward Sustainable Critical Infrastructure Systems: Framing the Challenges Workshop Committee Board on Infrastructure and the Constructed Environment Division on Engineering and Physical Sciences

Preface Much has been written in the past 20 years about the deterioratÂ­ing condition and quality of the nationâs roads and bridges and its power and water systems and about the trillions of dollars that it will take to fix them. The issues, however, are much more complex: How we as a nation choose to renew our infrastructure systems in the coming years will help determine the quality of life for future generations. It will also help deter- mine our success in meeting other national challenges, includ- ing those of remaining economically competitive, reducing our dependence on imported oil, and dealing with issues related to global climate change, national security, and disaster resilience. Many of the ideas and much of the information in this report were generated at a workshop held May 7 and 8, 2008, at the National Academies in Washington, D.C. In the time between the workshop and the completion of this report, global and domestic financial markets and systems have faltered in ways reminiscent of the 1930s. An economic stimulus package has been approved that includes funding for some infrastructure projects. N Â­ onetheless, the message of this reportâthat a paradigm shift is needed in how the nation thinks about, builds, operates, and invests in critical infrastructure systems in the long termâis more relevant than ever. The terms critical infrastructure and sustainability are frequently used in different contexts. In this report, critical infrastructure refers to the water, wastewater, power, transportation, and telecommu- vii

nications systemsâsometimes called lifeline systemsâwithout which buildings, emergency response systems, dams, and other infrastructure cannot operate as intended. Sustainability is broadly defined to mean the ability of systems to meet the needs of current and future generations by being physically resilient, cost-effective, environmentally viable, and socially equitable. In recent years, many organizations and individuals have called attention to the deteriorating condition of our infrastruc- ture and have offered solutions for renewing it. At this time, however, the United States does not have a vision or concept of, or stated objectives for, the future configuration, level of per- formance, or level of services that critical infrastructure systems should provide. Current local, regional, and national policies, processes, and practices are structured to treat these systems as stand-alone entities even though they are interdependent and the solutions chosen to âfixâ one system will affect the others. Lack- ing an overall strategy for infrastructure renewal and focusing on one system, one issue, or one problem at a time, the nation runs the risk of wasting increasingly scarce resources and of creating new problems for future generations. In addition, the nation has not yet fully considered how criti- cal infrastructure system renewal can be leveraged to help meet other national challenges, especially economic competitiveness, global climate change, national security, energy independence, and disaster resiliency. Although not intuitive, the linkages between these challenges and critical infrastructure systems are real and significant. Power, transportation, water, and teleÂ­ communications are the basis for producing and delivering goods and services that are key to economic competitiveness, emergency response and recovery, and quality of life. These sys- tems also account for 69 percent of the nationâs total energy use and for more than 50 percent of the greenhouse gas emissions linked to global climate change (EIA, 2008b). Because the infrastructure systems in the United States are deteriorating and require significant reinvestment, now is the time to conduct a fundamental reexamination of the value and purposes of critical infrastructure systems, their interÂ­dependencies, and the policies, processes, and procedures that guide their planning, construction, operation, and investment. A world of new possibili- ties and approaches to infrastructure renewal will open up if we choose to think about critical infrastructure more holistically, in terms of the services that these systems provideâwater, waste- viii PREFACE

water removal, power, mobility, and connectivityâand as part of a strategy for meeting other national imperatives. To paraphrase Albert Einstein, the significant problems we face cannot be solved at the same level of thinking we were at when we created them. The difficulties inherent in achieving a paradigm shift in the ways that Americans think about and invest in infrastructure cannot be solved by any one group or single strategy, nor do they need to be. New approaches, strategies, and ideas for providing and financing infrastructure-related services are being generated at the grassroots level; in universities; by local, state, and federal gov- ernments; by regional and not-for-profit organizations; and in the private sector. New technologies and materials can allow people to provide power and mobility using alternatives to imported oil, to save water and other dwindling resources, to reduce greenhouse gas emissions, and to create infrastructure systems that are more durable, reliable, resilient, and cost-effective. The challenge is to marshal the knowledge, creativity, finan- cial resources, and energy of a diverse array of individuals, inter- ests, and organizations to develop new concepts, approaches, and strategies for critical infrastructure renewal. A framework is needed to allow these groups to work collaboratively in a struc- tured way in order to develop practical, cost-effective solutions based on objective, evidence-based information. This report provides the elements of such a framework. It calls for a broad and compelling vision for the future; a focus on providing essential services; recognition of the interdependen- cies of critical infrastructure systems to enable the achievement of multiple objectives; collaborative, systems-based approaches to leverage available resources; and performance measures to provide transparency about infrastructure investments. Bringing the various stakeholder groups together to under- take this challenging endeavor first requires a call to action from leaders at the highest levels of government, academia, and indus- try. Succeeding in this effort will require imagination; a commit- ment to collaborate in the search for innovative, cost-effective, long-term solutions; and the will to stay the course. David J. Nash, Chair Toward Sustainable Critical Infrastructure Systems: Framing the Challenges Workshop Committee PREFACE ix

The Board on Infrastructure and the Constructed Environ- ment (BICE) was established by the National Research Council (NRC) in 1946 as the Building Research Advisory Board. BICE brings together experts from a wide range of scientific, engineer- ing, and social science disciplines to discuss potential studies of interest, develop and frame study tasks, ensure proper project planning, suggest possible reviewers for reports produced by fully independent ad hoc study committees, and convene meet- ings to examine strategic issues. Only those board members who were appointed to the Toward Sustainable Critical Infra- structure Systems: Framing the Challenges Workshop Com- mittee were asked to endorse the committeeâs conclusions or recommendations. Previous BICE reports on the nationâs critical infrastructure systems include the following: In Our Own Backyard: Principles for Effective Improvement of the Nationâs Infrastructure (1993); Toward Infrastructure Improvement: An Agenda for Research (1994); Measuring and Improving Infrastructure Performance (1995); The Challenge of Providing Future Infrastructure in an Environment of Limited Resources, New Technologies, and Changing Social Paradigms: Proceedings of a Colloquium (1995); and Financing Tomorrowâs Infra- structure: Challenges and Issues: Proceedings of a Colloquium (1996). These reports and additional information about BICE can be obtained online at http://www.nationalacademies.org/bice.  PREFACE

Acknowledgments The authoring committee acknowledges the significant contributions made by all of the workshop participants, who willingly and enthusiastically volunteered their time and ideas. Special recognition is owed to Hans Van Winkle and Wayne Crew of the Construction Industry Institute and to Jesus de la Garza, formerly with the National Science Foundation, whose conversa- tions in 2006 were the genesis of the workshop. This report has been reviewed in draft form by individuals chosen for their diverse perspectives and technical expertise, in accordance with procedures approved by the National Research Councilâs Report Review Committee. The purpose of this inde- pendent review is to provide candid and critical comments that will assist the institution in making its published report as sound as possible and to ensure that the report meets institutional stan- dards for objectivity, evidence, and responsiveness to the study charge. The review comments and draft manuscript remain confidential to protect the integrity of the deliberative process. We wish to thank the following individuals for their review of this report: George Bugliarello, Polytechnic Institute of New York University, John L. Casti, Complexica, Nancy Rutledge Connery, Independent Consultant, Woolwich, Maine, xi

Pablo Garcia, Sandia National Laboratories, Paul H. Gilbert, Parsons Brinckerhoff Quade & Douglas, James Elliott Moore II, University of Southern California, Yossi Sheffi, Massachusetts Institute of Technology, Kumares C. Sinha, Purdue University, and Robert D. Yaro, Regional Plan Association. Although the reviewers listed above have provided many constructive comments and suggestions, they were not asked to endorse the conclusions or recommendations, nor did they see the final draft of the report before its release. The review of this report was overseen by Richard Wright, National Institute of Standards and Technology (retired). Appointed by the National Research Council, he was responsible for making certain that an independent examination of this report was carried out in accordance with institutional procedures and that all review comments were carefully considered. Responsibility for the final content of this report rests entirely with the authoring committee and the institution. xii ACKNOWLEDGMENTS

Next: Summary »
Sustainable Critical Infrastructure Systems: A Framework for Meeting 21st Century Imperatives: Report of a Workshop Get This Book
× 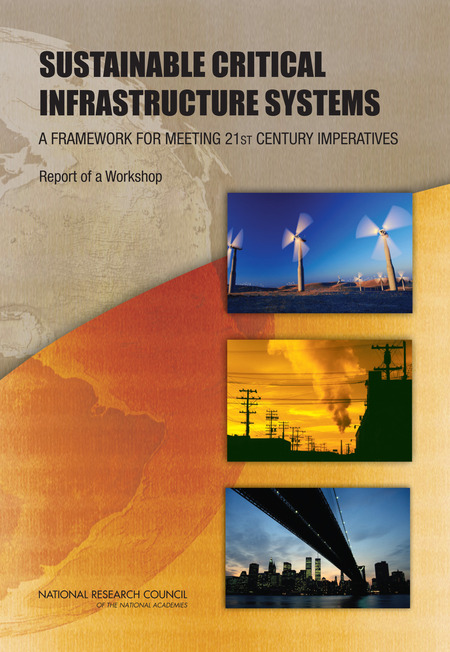 For the people of the United States, the 20th century was one of unprecedented population growth, economic development, and improved quality of life. The critical infrastructure systems-water, wastewater, power, transportation, and telecommunications-built in the 20th century have become so much a part of modern life that they are taken for granted. By 2030, 60 million more Americans will expect these systems to deliver essential services.

Large segments and components of the nation's critical infrastructure systems are now 50 to 100 years old, and their performance and condition are deteriorating. Improvements are clearly necessary. However, approaching infrastructure renewal by continuing to use the same processes, practices, technologies, and materials that were developed in the 20th century will likely yield the same results: increasing instances of service disruptions, higher operating and repair costs, and the possibility of catastrophic, cascading failures. If the nation is to meet some of the important challenges of the 21st century, a new paradigm for the renewal of critical infrastructure systems is needed.

This book discusses the essential components of this new paradigm, and outlines a framework to ensure that ongoing activities, knowledge, and technologies can be aligned and leveraged to help meet multiple national objectives.