Chapter:UNDERSTANDING THE SOCIETAL AND ECONOMIC IMPACTS OF SEVERE SPACE WEATHER

22 EXTENDED SUMMARY Figure 11. Earthâs electron belt (left) and proton belt (right) as defined by the empirical radiation belt models avail- able from NASA for use by satellite designers and mission planners. These models are based on older and limited 5.9 Chenette.eps data and do not incorporate data from more recent missions such as CRRES, SAMPEX, and Polar. They overpredict bitmap the degradation that spacecraft will experience from exposure to the geospace radiation environment, which results in the costly overdesign of many satellites in some orbits. A further difficulty with the standard radiation belt models in use today is that they do not capture the great variability on a variety of time scales that is characteristic of the near-Earth radiation environment. There is thus tremendous interest among spacecraft designers and mission plan- ners in next-generation radiation belt models and in the measurements that the two Living with a Star Radiation Belt Storm Probes will provide. (Image courtesy of David Chenette, Lockheed Martin Space Systems Company.) UNDERSTANDING THE SOCIETAL AND ECONOMIC IMPACTS OF SEVERE SPACE WEATHER Todayâs society depends heavily on a variety of technologies that are susceptible to severe space weather. Strong auroral currents can disrupt and damage modern electric power grids and may contribute to the corrosion of oil and gas pipelines. Magnetic storm-driven iono- spheric density disturbances interfere with HF radio communications and navigation signals from Global Positioning System satellites, while polar cap absorption events can degradeâand, during severe events, completely black outâHF communications along transpolar aviation routes, requiring aircraft flying these routes to be diverted to lower latitudes. Exposure of space- craft to energetic particles during solar energetic particle events and radiation belt enhance-

EXTENDED SUMMARY 23 ments can cause temporary operational anomalies, damage critical electronics, degrade solar arrays, and blind optical systems such as imagers and star trackers. The adverse effects of severe space weather on modern technology are well known and well documented, and risk-mitigation procedures and technologies have been developed. The physical processes underlying space weather are also generally well understood, although improvements in our ability to model the space environment and to forecast severe space weather events are needed. Less well documented and understood, however, are the potential economic and soci- etal impacts of the disruption of critical technological systems by severe space weatherâand, in particular, by rare extreme events such as the Carrington Event of 1859. Defining and quantifying these impacts presents a number of questions and challenges with respect to the gathering of the necessary data and the methodology for assessing the risks of severe space weather disturbances as low-frequency/high-consequence events. Multiple variables must be taken into account, including the magnitude, duration, and timing of the event; the nature, severity, and extent of the collateral effects cascading through a society characterized by strong dependencies and interdependencies; the robustness and resilience of the affected infrastruc- tures; the perception of risk on the part of policy makers and stakeholders; the risk management strategies and policies that the public and private sectors have in place; and the capability of the responsible federal, state, and local government agencies to respond to the effects of an extreme space weather event. A quantitative and comprehensive assessment of the societal and economic impacts of severe space weather will be a truly daunting task. REFERENCES â 1. Lakhina, G.S., et al., Research on historical records of geomagnetic storms, Proceedings of the International Astronomical Union, 2004, pp. 3-15, doi:10.1017/S1743921305000074. â 2. Bedingfield, K.L., R.D. Leach, and M.B. Alexander, Spacecraft System Failures and Anomalies Attributed to the Natural Space Environment, NASA Reference Publication 1390, August 2006, pp. 1 and 5. â 3. Silverman, S.M., and E.W. Cliver, Low-latitude auroras: The magnetic storm of 14-15 May 1921, Journal of Atmospheric and Solar-Terrestrial Physics 63, 523-535, 2001. â 4. Walker, C.V., On magnetic storms and currents, Philosophical Transactions of the Royal Society 151, 89-131, 1861. The quote is from p. 95: âThe fact appears to have been that the disturbance was of such magnitude and of so long continuance, and this at the busy season when the telegraph is more than usually required, that our clerks were at their witsâ end to clear off the telegrams (which accumulated in their hands) by other less affected but less direct routes.â Walker was the telegraph engineer for the South Eastern Railway. â 5. Odenwald, S., The 23rd Cycle: Learning to Live with a Stormy Star, Columbia University Press, New York, 2001. â 6. U.S.-Canada Power System Outage Task Force, âFinal Report on the August 14, 2003 Blackout in the United States and Canada: Causes and Recommendations,â April 2004. See news.findlaw.com/hdocs/docs/ferc/ uscanrpt40504ch1-3.pdf. â 7. The Carrington Event was the topic of a special issue of Advances in Space Research published in 2006. Unless otherwise noted, the information in this account is drawn largely from that collection of papers. The following articles were particularly helpful: Green, J.L., et al., Eyewitness reports of the great auroral storm of 1859, Adv. Space Res. 38, 145-153; Green, J.L., and S. Boardsen, Duration and extent of the great auroral storm of 1859, Adv. Space Res. 38, 130-135; Cliver, E.W., The 1859 space weather event: Then and now, Adv. Space Res. 38, 119-129; Shea, M.A., et al., Solar proton events for 450 years: The Carrington Event in perspective, Adv. Space Res. 38, 232-238; and Shea, M.A., and D.F. Smart, Compendium of the eight articles on the âCarrington Eventâ attributed to or written by Elias Loomis in the American Journal of Science, 1859-1861, Adv. Space Res. 38, 313-385. Elias Loomis (1811-1889) was a professor of natural philosophy at Yale University with a particular interest in meteorology. Loomis collected reports

24 EXTENDED SUMMARY of the aurora and magnetic disturbances observed during the 1859 storms and published them in eight installments in the Am. J. Sci. Henry Perkinsâ report is contained in Loomisâ third article, which appears on pp. 322-333 of the ASR compendium; the description of the red aurora seen over Havana is from a report published in the first installment; it appears on p. 326 of the ASR compendium. The Rocky Mountain News account of the aurora over Colorado is quoted by Green et al., p. 149. â 8. New York Times, August 30, 1859. â 9. Standage, T., The Victorian Internet: The Remarkable Story of the Telegraph and the Nineteenth Centuryâs On- Line Pioneers, Walker & Company, New York, 2007. 10. The Philadelphia Evening Bulletin is quoted in the New York Times of August 30, 1859. Sparking started fires in some telegraph offices, and one operator, Frederick Royce of Washington, D.C., received âa very severe electric shock, which stunned me for a moment.â A witness saw âa spark of fire jump from [Royceâs] forehead to the sounder.â Royceâs account of his experience was reported in the New York Times of September 5, 1859, and reprinted by Loomis (note 7) and G.B. Prescott (note 11). 11. Prescott, G.B, History, Theory, and Practice of the Electric Telegraph, Ticknor and Fields, Boston, 1860, p. 320. 12. Carrington, R.C., Description of a singular appearance seen in the Sun on September 1, 1859, Monthly Notices of the Royal Astronomical Society 20, 13-14, 1860. Quoted in J. Bartels, Solar eruptions and their ionospheric effectsâA classical observation and its new interpretation, Journal of Terrestrial Magnetism and Atmospheric Electricity 42, 235-239, 1937. 13. Cliver, E.W., and L. Svalgaard, The 1859 solar-terrestrial disturbance and the current limits of extreme space weather activity, Solar Physics 224, 407-422, 2004. Cliver and Svalgaard rank the Carrington Event against other severe storms in terms of sudden ionospheric disturbance, solar energetic particle fluence, coronal mass ejection transit time, storm intensity, and equatorward extent of the aurora. They conclude (p. 407), âWhile the 1859 event has close rivals or superiors in each of the above categories of space weather activity, it is the only documented event of the last ~150 years at or near the top of all the lists.â 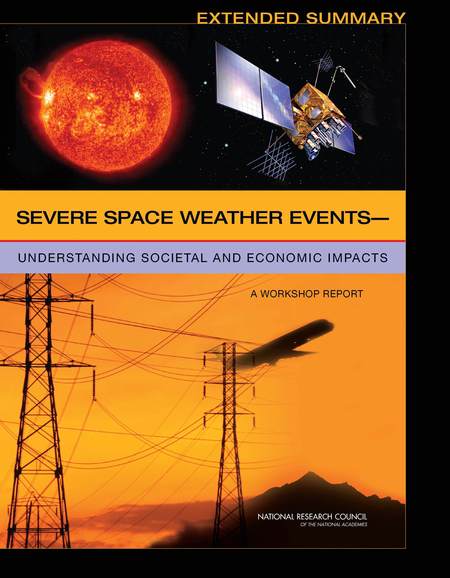