Get This Book
Visit NAP.edu/10766 to get more information about this book, to buy it in print, or to download it as a free PDF.
« Previous: Future of Space and Earth Robotic Exploration: Scientific and Technological Challenges and Opportunities--Charles Elachi
Page 126 Share Cite
Suggested Citation:"Frank B. McDonald." National Research Council. 2010. Forging the Future of Space Science: The Next 50 Years. Washington, DC: The National Academies Press. doi: 10.17226/12675.
×

FRANK McDONALD is a pioneer and world-renowned leader in space physics and cosmicray astrophysics. His career of more than 50 years began with James Van Allen at the University of Iowa. He has devoted much of this time to studies of galactic cosmic radiation, solar energetic particles, and planetary magnetospheres. With their experiments on Pioneer 10 and 11, McDonald and Van Allen gave us the first comprehensive close-up look of energetic particles trapped in the magnetospheres of Jupiter and Saturn. With his many space-borne instruments, McDonald explored vast regions of our solar system, from the orbit of Mercury with the twin Helios spacecraft to distances of over 100 astronomical units with the Voyager 1 and 2 spacecraft that have now entered a new frontier, the heliosheath beyond the solar wind termination shock. McDonald’s pioneering work began in the mid 1950s when he led two Rockoon (sounding rockets launched from balloons—a system invented by Van Allen) expeditions in 1954 and 1955 to study cosmic rays and what was then known as “soft radiation.” McDonald opened up the new area of cosmic ray astrophysics—being first to use a multi-parameter electronic detector system to determine both the atomic number and kinetic energy of individual nuclei of the primary cosmic rays.

Over the years, he has made definitive observational and interpretive studies of the energy spectra and elemental as well as isotopic composition of galactic cosmic radiation, the dependence of the intensity of this radiation on solar activity and on distance from the Sun, and of the composition, energy spectra, and propagation of energetic nuclei accelerated at the Sun and by shock waves in the heliosphere. He discovered co-rotating streams of energetic nuclei in the heliosphere beyond a few AU. He discovered quiet time fluxes of 3 to 12 MeV electrons. In the early 1970s he co-discovered a new component of low-energy cosmic rays with a highly unusual elemental composition, which he named “anomalous cosmic rays.” His subsequent discovery of anomalous cosmic ray N and Ne paved the way to our current understanding of the role of interstellar neutrals in the heliosphere. He discovered the important role of radially propagating merged interaction regions in modulating cosmic rays.

Still very active in his research, McDonald is focused on understanding the basic acceleration and transport processes of solar, anomalous and galactic cosmic rays. Using data from the two Voyager spacecraft, he is studying the dynamics of one of the last unexplored regions of our solar system, the regions close to the termination shock and the heliosheath.

Dr. McDonald served as chief of the Laboratory for High Energy Astrophysics at the NASA Goddard Space Flight Center, as NASA chief scientist, and as associate director/chief scientist at Goddard. Dr. McDonald made numerous important contributions to national and international activities in high-energy astrophysics, both by his own work and by his effective advocacy. He served as project scientist on nine NASA missions and was principal investigator on fifteen space experiments. Dr. McDonald is the author of more than 300 scientific publications and has written articles on space policy and space related subjects in Science and Physics Today. He served as chair or member on almost 35 committees and panels. He is a member of the National Academy of Sciences as well as the recipient of numerous honors and awards, among them the Lindsay Award and the Presidential Rank of Meritorious Excellence Award.

Next: Explorer 1: Gateway to the Never Ending Wonders of Space Science--The Space Studies Board Van Allen Lecture delivered by Frank B. McDonald »
Forging the Future of Space Science: The Next 50 Years Get This Book
× 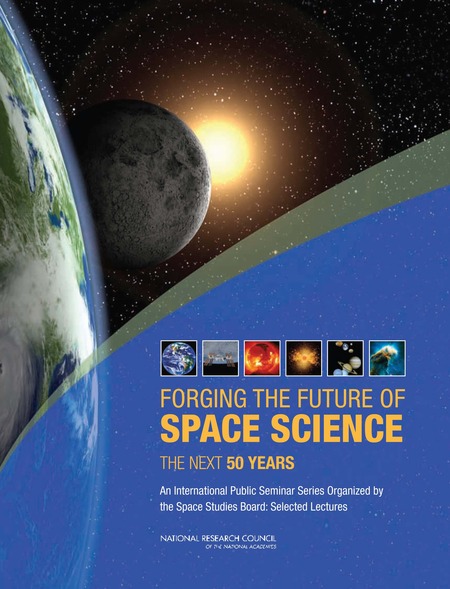 From September 2007 to June 2008 the Space Studies Board conducted an international public seminar series, with each monthly talk highlighting a different topic in space and Earth science. The principal lectures from the series are compiled in Forging the Future of Space Science. The topics of these events covered the full spectrum of space and Earth science research, from global climate change, to the cosmic origins of life, to the exploration of the Moon and Mars, to the scientific research required to support human spaceflight.

The prevailing messages throughout the seminar series as demonstrated by the lectures in this book are how much we have accomplished over the past 50 years, how profound are our discoveries, how much contributions from the space program affect our daily lives, and yet how much remains to be done. The age of discovery in space and Earth science is just beginning. Opportunities abound that will forever alter our destiny.