The Socioeconomic Effects of Public Sector Information on Digital Networks: Toward a Better Understanding of Different Access and Reuse Policies: Workshop Summary (2009)

Chapter:9. The Price of Everything but the Value of Nothing

Visit NAP.edu/10766 to get more information about this book, to buy it in print, or to download it as a free PDF.
« Previous: 8. Different PSI Access Policies and Their Impact
Page 37 Share Cite
Suggested Citation:"9. The Price of Everything but the Value of Nothing." National Research Council. 2009. The Socioeconomic Effects of Public Sector Information on Digital Networks: Toward a Better Understanding of Different Access and Reuse Policies: Workshop Summary. Washington, DC: The National Academies Press. doi: 10.17226/12687.
×

Page 38 Share Cite
Suggested Citation:"9. The Price of Everything but the Value of Nothing." National Research Council. 2009. The Socioeconomic Effects of Public Sector Information on Digital Networks: Toward a Better Understanding of Different Access and Reuse Policies: Workshop Summary. Washington, DC: The National Academies Press. doi: 10.17226/12687.
×

Page 39 Share Cite
Suggested Citation:"9. The Price of Everything but the Value of Nothing." National Research Council. 2009. The Socioeconomic Effects of Public Sector Information on Digital Networks: Toward a Better Understanding of Different Access and Reuse Policies: Workshop Summary. Washington, DC: The National Academies Press. doi: 10.17226/12687.
×

9. The Price of Everything but the Value of Nothing1 Antoinette Graves Office of Fair Trading, United Kingdom Oscar Wilde defined a cynic as someone who knows the price of everything but the value of nothing, which is apt for understanding PSI and ultimately what is being done to promote PSI access and reuse policies. Policy makers wish to maximize the value of PSI to the economy as a whole, but when public sector bodies charge for PSI, those costs can actually inhibit others from adding value. The same is true with licensing restrictions even if they are put in place to protect the bodies that want to exploit the data and set their own prices. When the Office of Fair Trading (OFT) carried out its study on public sector information, the purpose was to examine whether the market was working well for end consumers, defined more broadly than just citizens or taxpayers. To answer whether the market was working well, the intention was to look beyond competition for competitionâs sake and, in particular, to look further up the supply chain to determine whether the market was working well between public sector bodies and businesses and among the public sector bodies themselves, and then to make suggestions that took into account the size and the potential size of the market. At the risk of sounding like a character in Alice in Wonderland, the answer of how to measure the value of PSI is that it all depends on what you want to know. To begin, OFT needed an estimate of the current value and size of the market. It was then necessary to determine the current income to PSI holders as well as the value to the businesses that are using and reusing the information, but without double counting. To determine the former, OFT had access to some reasonably reliable figures, but for the latter new economic modeling had to be done. Not surprisingly, OFT concluded that public sector information is valuable and vitally important for businesses. There were a lot of products that just could not be made, or that could not be made in the form that they were, without access to and reuse of public sector information. When problems arose it was often due to public sector bodies that were in some way adding value themselves. In addition to gathering the information at the upstream level, these bodies were doing something downstream that gave them an incentive to restrict access to the upstream level. Thus it was important to identify the monopoly element in order to begin solving some of the problems. For example, it was determined that marginal-cost pricing is not necessarily the answer. While public sector bodies may use differential pricing and recover more of their costs on certain products or users than on others, they may still restrict what is available. Moreover, when value is added, if a marginal price is charged, it is undercutting the competition. The maximum that should be charged for the monopoly (or upstream) would be full cost recoveryâplus, in the United Kingdom, the required rate of return to the Treasury. At the same time, if the public sector is doing something with the PSI that the 1 Based on a presentation found at http://www.oecd.org/dataoecd/12/34/40066135.pdf 37

38 SOCIOECONOMIC EFFECTS OF PSI ON DIGITAL NETWORKS private sector could also do if it had access to the upstream information, then that qualifies as a downstream activity and the minimum amount charged should be full cost recovery, because anything less would be undercutting competition. It is not necessarily possible to ban public sector bodies from the downstream market altogether and, in some cases, there could be some genuine economies of scale or scope because of vertically integrated public sector bodies that have the capabilities to perform downstream activities. The main concern is to ensure a level playing field so that competition can occur, and if the private sector can make downstream products more cheaply or meet consumer demands in other ways, then the public sector body should consider pulling out of the market. One implication of these considerations is that public sector bodies should make their information available at the earliest point that it is useful to businesses. The public entities should not complicate things by bundling their information with other data and then not allowing the private sector access to the background data. While it may be necessary to have aggregated and anonymous provision of personal data at the first stage, when it is still upstream data, the data should be made available on the same basis as to the entitiesâ own downstream operationsâthat is, for the same pricing and licensing terms. In terms of assessing the value of PSI, there are improvements that could lead to a doubling in the value of PSI to around a billion pounds per year. How is this possible? Whereas previous studies have looked at the gross value added by PSI to the economyâa top-down approachâthe tendency was for these studies to overestimate the real value of PSI to the economy because they were not looking at any possible substitutes. For example, the Pira study in 2000 used the turnover of public sector bodies, and that figure included non-PSI-related income, government grants, and so on. Other studies, such as the Ordnance Survey commissioned in 1999, also used this top-down approach. The contribution of Ordnance Survey data to Great Britain was estimated to be between â¤79 billion and â¤136 billion, representing about 12 to 20 percent of the gross value added to the entire economy during 1996. Roger Timm and Partners conducted a top-down study for the British Geological Survey (BGS), assessing its value at 8 percent of GDP, or â¤34 billion to â¤61 billion. These numbers clearly overstate the significance of these organizations, because to conclude that together they underpin over 25 percent of the economic activity in the United Kingdom is just not plausible. It would not take many more studies before the conclusion would be that PSI contributed 100 percent or more of the economic activity in the United Kingdom. Thus, the top-down approach ignores the counterfactual, because it ignores what happens in the absence of PSI. It is better to look at the value of PSI today in terms of net economic value by estimating the willingness to pay for PSI minus the cost of producing and supplying itâ that is, a bottom-up approach. To that end, OFT looked at the consumer detriment, the types of detriment that could occur, and the likelihood of them occurring for any given group of PSI holders, as well as the potential magnitude of each negative factor. The types of detriment included: unduly high pricing; restriction of downstream competition, including refusal to supply or discrimination; and failure to exploit PSI. The income of PSI holders was examined by asking how much they earned directly from their information activity, excluding government grants, and, especially, if other public sector

PRICE OF EVERYTHING BUT THE VALUE OF NOTHING 39 bodies were customers. The resulting calculation indicated that the net value of public sector information in the United Kingdom is about 590 million pounds per year. The costs of the three types of detriments were estimated to be â¤20 million from high pricing, â¤140 million from restriction of downstream competition, and â¤360 million from failure to exploit PSI. Thus OFT suggests that the net value of public sector information in the United Kingdom could be increased to approximately â¤1.1 billion pounds by resolving all of the problems already identified. The reactions to the OFT study were interesting. Clearly, the bottom-up approach is more accurate, not least because the possibility of alternative products and services is considered. As a result, some of the public sector bodies approached OFT immediately and asked for help with their pricing policies to make sure that they were not unfairly competing or restricting competition. The British government accepted many of the studyâs recommendations, except the recommendation for a splitting in accounting terms of the upstream and downstream, i.e., the monopolistic and non-monopolistic elements. The Treasury has commissioned Cambridge University to do a cost-benefit analysis of whether to split the accounts and to look at different pricing models. That additional report is expected soon.

Next: 10. Enhancing Access to Government Information: Economic Theory as ItApplies to Statistics Canada »
The Socioeconomic Effects of Public Sector Information on Digital Networks: Toward a Better Understanding of Different Access and Reuse Policies: Workshop Summary Get This Book
× 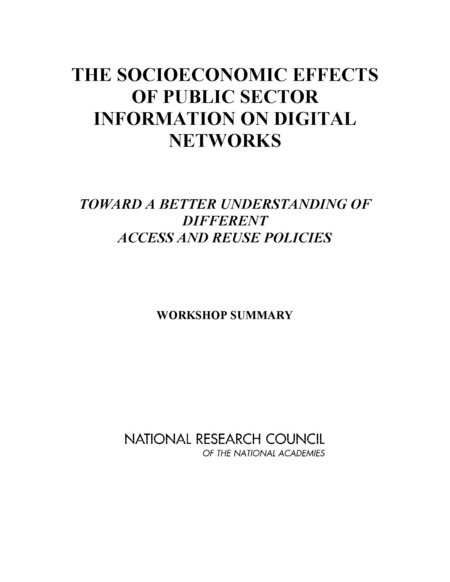 While governments throughout the world have different approaches to how they make their public sector information (PSI) available and the terms under which the information may be reused, there appears to be a broad recognition of the importance of digital networks and PSI to the economy and to society. However, despite the huge investments in PSI and the even larger estimated effects, surprisingly little is known about the costs and benefits of different information policies on the information society and the knowledge economy.

By understanding the strengths and weaknesses of the current assessment methods and their underlying criteria, it should be possible to improve and apply such tools to help rationalize the policies and to clarify the role of the internet in disseminating PSI. This in turn can help promote the efficiency and effectiveness of PSI investments and management, and to improve their downstream economic and social results.

The workshop that is summarized in this volume was intended to review the state of the art in assessment methods and to improve the understanding of what is known and what needs to be known about the effects of PSI activities.