In the Light of Evolution: Volume III: Two Centuries of Darwin (2009)

Chapter:Part I: NATURAL SELECTION, OR ADAPTATION TO NATURE

Get This Book
Visit NAP.edu/10766 to get more information about this book, to buy it in print, or to download it as a free PDF.
« Previous: Front Matter
Page 1 Share Cite
Suggested Citation:"Part I: NATURAL SELECTION, OR ADAPTATION TO NATURE." National Academy of Sciences. 2009. In the Light of Evolution: Volume III: Two Centuries of Darwin. Washington, DC: The National Academies Press. doi: 10.17226/12692.
×

Part I
NATURAL SELECTION, OR ADAPTATION TO NATURE

The concept of natural selection—as the unconscious broker of adaptive evolution—is Darwin’s seminal contribution. It provided a materialistic account of nature’s operations that contrasted sharply with the traditional invocations of supernatural causation that predominated before The Origin. The basic logic of natural selection is astonishingly simple. As phrased by Darwin in The Origin,

As many more individuals of each species are born than can possibly survive; and as, consequently, there is a frequently recurring struggle for existence, it follows that any being, if it vary however slightly in any manner profitable to itself, under the complex and sometimes varying conditions of life, will have a better chance of surviving, and thus be naturally selected. From the strong principle of inheritance, any selected variety will tend to propagate its new and modified form.

Darwin’s clear elucidation of natural selection launched a revolutionary new paradigm in biology wherein organismal traits could be studied and interpreted as products of natural (rather than supernatural) forces amenable to rational scientific inquiry. Scientific studies of natural selection are now more popular and powerful than ever, and they have revealed the evolutionary origins and trajectories of numerous biological features and taxa.

A major limitation in Darwin’s characterization of evolution concerned hereditary mechanisms, a difficulty that the field began to rectify early in the 20th century by incorporating Mendelian genetics and popu-

lation genetics into the emerging evolutionary synthesis (Dobzhansky, 1937). Today, in the genomics era, scientists routinely extend studies of natural selection and trait evolution to the level of DNA itself, as several chapters in this book will attest. Genomic dissections are also providing fresh insights into the ancient mystery alluded to in the title of Darwin’s seminal work: how species originate. Ironically, The Origin says relatively little about the evolution of reproductive isolating barriers, which under the modern biological species concept are key to understanding cladogenetic (speciational) processes.

In the opening chapter of this book, Sara Via takes a fresh perspective on the origin of species by characterizing genomic regions that appear to be diverging early in a speciation process. She calls this the “magnifying glass” approach for speciation in action, and contrasts it with the more traditional “spyglass” approach in which each completed speciation is characterized retrospectively by scrutinizing genetic differences between established sister taxa. Via develops and presents genetic evidence for a model in which incipient species become, in effect, genealogical mosaics in which ecologically important genomic regions (i.e., those under divergent ecological selection, sometimes even in sympatry) become resistant to genetic exchange, while gene flow remains possible over most of the genome. The key genomic regions under divergent selection become focal points for “divergence hitchhiking” by linked loci, as they reduce the porosity of the emerging species boundary to gene exchange. Under this scenario, Via views divergent selection as the motivator of genealogical differences (in these particular genomic regions) that later will crystallize into the branching pattern in the species phylogeny. Eventually, in responses to selection, genetic drift, and mutation, gene genealogies in the remainder of the genome will come into topological concordance with the species phylogeny, but these additional genetic differences will have been the effect of speciation rather than its cause.

Some of the richest biological quarries for extracting information about natural selection and speciation involve clades (monophyletic groups) that have arisen via rapid adaptive radiations. Darwin presaged such evolutionary analyses in his considerations of different forms of mockingbirds in the Galápagos Islands, and in the various finch species he collected there that now bear Darwin’s name (but whose evolutionary appraisal mostly awaited later researchers). In Chapter 2, Scott Hodges and Nathan Derieg take a modern approach to speciation analysis by integrating observations from field studies with molecular and phylogenetic dissections of genes for traits (especially flower color) that probably played key cladogenetic roles in a spectacular evolutionary radiation of Aquilegia (columbine) plants. The authors describe how molecular investigations of genomes can

complement traditional approaches and contribute to a better mechanistic understanding of how new species arise.

In Chapter 3, Dolph Schluter and Gina Conte emphasize a theme—ecological speciation—that would please Darwin. Under ecological speciation, reproductive isolation between populations emerges from the effects of ecology-based divergent natural selection. The authors address this speciation mode generally (with respect to the genetics of postzygotic isolation and prezygotic isolation under gene flow, and the role of standing genetic variation in the process) as well as specifically (with reference to speciation in stickleback fishes). For the sticklebacks, they develop an interesting “transporter model” of ecological speciation in which ecological selection pressures in freshwater streams consistently select for alleles different from those normally present in marine populations. However, occasional hybridization between freshwater and marine forms ensures a continual supply of freshwater alleles in the sea, at low frequency and disassembled by genetic recombination. When marine fish colonize a newly opened stream, natural selection can act on this standing pool of genetic variation to reconstitute the freshwater genotype. The analogy in the title of their model is to a fictional process in the movie Star Trek, wherein an organic body placed in the transporter is disintegrated only to be reassembled at a future time in a distant location.

The vast majority of phylogenetic diversity in eukaryotes is to be found not in the lineages of multicellular plants and animals, but rather in unicellular microbes (protists). Perhaps it is not surprising, therefore, that these microeukaryotes provide a wealth of opportunities (heretofore relatively untapped) for scientific investigations into natural selection and evolutionary operations. In Chapter 4, Julius Lukeš, Brian Leander, and Patrick Keeling exemplify the utility of protists for providing evolutionary insights by summarizing numerous phenotypic as well as genomic features in representatives of two huge protistan phylads: Alveolata and Euglenozoa. They underscore the mind-boggling diversity in protists of molecular genetic as well as phenotypic features, ranging from cellular ultrastructures to mechanisms of mRNA processing and the organization of organellar genomes. The picture that emerges is one of extraordinary evolutionary experimentation in these protists, sometimes channeled into convergent outcomes by natural selection, sometimes constrained by the idiosyncrasies of phylogeny, but always tinkered endlessly by various mixes of both chance and necessity.

Next: 1 Natural Selection inAction During Speciation--Sara Via »
In the Light of Evolution: Volume III: Two Centuries of Darwin Get This Book
× 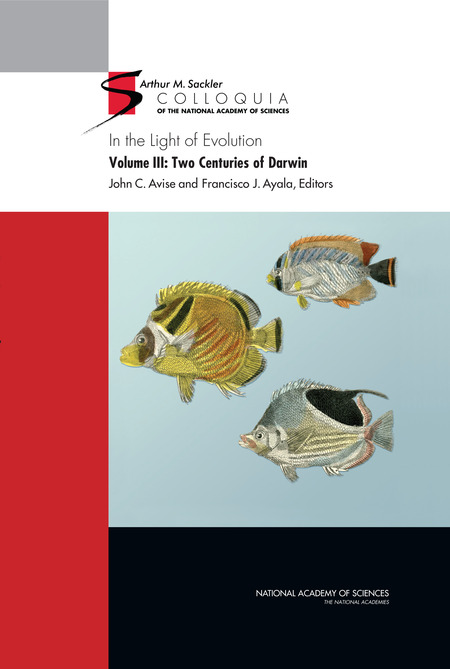 Two Centuries of Darwin is the outgrowth of an Arthur M. Sackler Colloquium, sponsored by the National Academy of Sciences on January 16-17, 2009. In the chapters of this book, leading evolutionary biologists and science historians reflect on and commemorate the Darwinian Revolution. They canvass modern research approaches and current scientific thought on each of the three main categories of selection (natural, artificial, and sexual) that Darwin addressed during his career. Although Darwin's legacy is associated primarily with the illumination of natural selection in The Origin, he also contemplated and wrote extensively about what we now term artificial selection and sexual selection. In a concluding section of this book, several science historians comment on Darwin's seminal contributions.

Two Centuries of Darwin is the third book of the In the Light of Evolution series. Each installment in the series explores evolutionary perspectives on a particular biological topic that is scientifically intriguing but also has special relevance to contemporary societal issues or challenges. The ILE series aims to interpret phenomena in various areas of biology through the lens of evolution and address some of the most intellectually engaging, as well as pragmatically important societal issues of our times.