Fostering Visions for the Future: A Review of the NASA Institute of Advanced Concepts (2009)

Visit NAP.edu/10766 to get more information about this book, to buy it in print, or to download it as a free PDF.
Page i Share Cite
Suggested Citation:"Front Matter." National Research Council. 2009. Fostering Visions for the Future: A Review of the NASA Institute of Advanced Concepts. Washington, DC: The National Academies Press. doi: 10.17226/12702.
×

THE NATIONAL ACADEMIES PRESS 500 Fifth Street, N.W. Washington, DC 20001 NOTICE: The project that is the subject of this report was approved by the Governing Board of the National Research Council, whose members are drawn from the councils of the National Academy of Sciences, the National Academy of Engineering, and the Institute of Medicine. The members of the committee responsible for the report were chosen for their special competences and with regard for appropriate balance. This study is based on work supported by Contract NNH05CC16C between the National Academy of Sciences and the National Aeronautics and Space Administration. Any opinions, findings, conclusions, or recommendations expressed in this publication are those of the author(s) and do not necessarily reflect the views of the agency that provided support for the project. International Standard Book Number-13: 978-0-309-14051-5 International Standard Book Number-10: 0-309-14051-X Cover: Cover design by Tim Warchocki. Clockwise from top left: Artistâs rendering of a BioSuitâ ¢ emphasizes how it aids maneuverability, courtesy of Professor Dava Newman, Massachusetts Institute of Technology; Artistâs concept of a swarm of mass driver deflection spacecraft approaching a target asteroid, courtesy of SpaceWorks Engineering, Inc. (SEI), artwork by Nathan Phail-Liff; Artistâs concept of a Directed Aerial Robot Explorer balloon platform on Mars, courtesy of Global Aerospace Corporation (K. Nock), the European Space Agency/Deutsches Zentrum fÃ¼r Luft-und Raumfahrt e.V./Freie UniversitÃ¤t Berlin (G. Neukum), and A. Pankine; Artistâs concept of the New Worlds Observatory starshield, courtesy of NASA and Northrop Grumman Company; Three-dimensional rendering of Earth, courtesy of Martin Kornmesser, Hubble European Space Agency Information Centre. Copies of this report are available free of charge from: Aeronautics and Space Engineering Board National Research Council 500 Fifth Street, N.W. Washington, DC 20001 Additional copies of this report are available from the National Academies Press, 500 Fifth Street, N.W., Lockbox 285, Washington, DC 20055; (800) 624-6242 or (202) 334-3313 (in the Washington metropolitan area); Internet, http://www.nap.edu. Copyright 2009 by the National Academy of Sciences. All rights reserved. Printed in the United States of America

Preface The NASA Institute for Advanced Concepts (NIAC) was established in 1998 to provide an independent, open forum for the external analysis and definition of revolutionary space and aeronautics advanced concepts to complement the advanced concepts activities conducted within the NASA enterprises. Funded at approximately $4 million per year, NIAC received a total of $36.2 million in NASA funding during the 9 years of its existence; it was terminated by NASA in 2007. In the report that accompanied the Commerce, Justice, Science, and Related Agencies fiscal year 2008 appropriations bill passed by the U.S. House of Representatives,1 the NASA administrator was directed to Enter into an arrangement with the National Research Council [NRC] to evaluate NIACâs effectiveness in meeting its mission, including a review of the grants made by the Institute, their results, and the likelihood that they will contribute to the Instituteâs stated goals; evaluate the method by which grantees are selected and recommend changes, if needed; and make recommendations as to whether the Institute should continue to be funded by the federal government and, if so, what changes, if any, should be made to its mission, goals, operations, or other matters. To carry out the review of NIAC, an ad hoc committee of 12 experts in advanced space and aeronautical concepts was established under the auspices of the NRCâs Aeronautics and Space Engineering Board. The members of the Committee to Review the NASA Institute for Advanced Concepts were chosen for their experience with aspects of scientific innovation and creativity, from across a number of institutions and agencies, including the Defense Advanced Research Projects Agency (DARPA), NASA, the SETI Institute, industry, and academia. The committee membership is shown in Appendix B. The committee heard testimony from the NIAC director, NASA leadership involved in the creation and management of NIAC, a cross section of NIAC grantees, and leaders of other advanced technology organizations, including DARPA. A list of presenters is shown in Appendix C. The committeeâs first meeting was held in Washington, D.C., on December 8-9, 2008, and was devoted largely to gathering data on the history, organization, and accomplishments of NIAC; discussing the data; and forming subgroups to examine specific issues. The objectives of the committeeâs second meeting, held on February 19-20, 2009, at the Arnold and Mabel Beckman Center in Irvine, California, were to gather additional data from presentations made by former NIAC grantees and by persons from within and outside NASA that were experienced in the infusion of advanced concepts into mission- oriented programs and to formulate the committeeâs findings and recommendations. 1 U.S. House of Representatives, Commerce, Justice, Science, and Related Agencies Appropriations Act, 2008, H.R. 3093, available at http://thomas.loc.gov/. vii

Acknowledgment of Reviewers This report has been reviewed in draft form by individuals chosen for their diverse perspectives and technical expertise, in accordance with procedures approved by the Report Review Committee of the National Research Council (NRC). The purpose of this independent review is to provide candid and critical comments that will assist the institution in making its published report as sound as possible and to ensure that the report meets institutional standards for objectivity, evidence, and responsiveness to the study charge. The review comments and draft manuscript remain confidential to protect the integrity of the deliberative process. We wish to thank the following individuals for their review of this report: Wanda Austin, The Aerospace Corporation, Paul Bevilaqua, Lockheed Martin Aeronautics Co., John Howell, University of Texas, Austin, John Reppy, Cornell University (emeritus), George Sutton, SPARTA, Inc., and Gerald Walberg, Walberg Aerospace (retired). Although the reviewers listed above have provided many constructive comments and suggestions, they were not asked to endorse the conclusions or recommendations, nor did they see the final draft of the report before its release. The review of this report was overseen by Martha Haynes, Cornell University. Appointed by the NRC, she was responsible for making certain that an independent examination of this report was carried out in accordance with institutional procedures and that all review comments were carefully considered. Responsibility for the final content of this report rests entirely with the authoring committee and the institution. viii

Next: Summary »
Fostering Visions for the Future: A Review of the NASA Institute of Advanced Concepts Get This Book
× 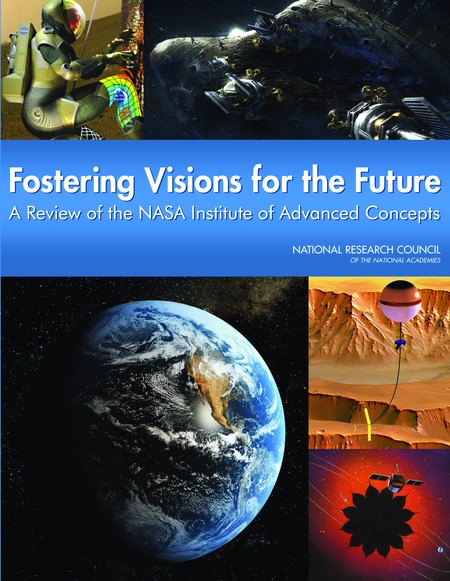 The NASA Institute for Advanced Concepts (NIAC) was formed in 1998 to provide an independent source of advanced aeronautical and space concepts that could dramatically impact how NASA develops and conducts its missions. Until the program's termination in August 2007, NIAC provided an independent open forum, a high-level point of entry to NASA for an external community of innovators, and an external capability for analysis and definition of advanced aeronautics and space concepts to complement the advanced concept activities conducted within NASA. Throughout its 9-year existence, NIAC inspired an atmosphere for innovation that stretched the imagination and encouraged creativity.

As requested by Congress, this volume reviews the effectiveness of NIAC and makes recommendations concerning the importance of such a program to NASA and to the nation as a whole, including the proper role of NASA and the federal government in fostering scientific innovation and creativity and in developing advanced concepts for future systems. Key findings and recommendations include that in order to achieve its mission, NASA must have, and is currently lacking, a mechanism to investigate visionary, far-reaching advanced concepts. Therefore, a NIAC-like entity should be reestablished to fill this gap.