Chapter:Appendix B: Statement of Task

Get This Book
Visit NAP.edu/10766 to get more information about this book, to buy it in print, or to download it as a free PDF.
« Previous: Appendix A: Letter of Request
Page 22 Share Cite
Suggested Citation:"Appendix B: Statement of Task." National Research Council. 2009. Near-Earth Object Surveys and Hazard Mitigation Strategies: Interim Report. Washington, DC: The National Academies Press. doi: 10.17226/12738.
×

B
Statement of Task

The Space Studies Board, in cooperation with the Aeronautics and Space Engineering Board, will conduct a two-part study to address issues in the detection of potentially hazardous Near-Earth Objects (NEOs) and approaches to mitigating identified hazards. Both tasks will include an assessment of the costs of various alternatives, using independent cost estimating. Options that blend the use of different facilities (ground- or space-based), or involve international cooperation, may be considered. Each study phase will result in a report to be delivered on the schedule provided below. Key questions to be addressed during each phase of the study are the following:

What is the optimal approach to completing the NEO census called for in the George E. Brown, Jr. Near-Earth Object Survey section of the 2005 NASA Authorization Act to detect, track, catalogue and characterize the physical characteristics of at least 90 percent of potentially hazardous NEOs larger than 140 meters in diameter by the end of year 2020? Specific issues to be considered include, but are not limited to, the following:

What is the optimal approach to developing a deflection capability, including options with a significant international component? Issues to be considered include, but are not limited to, the following: 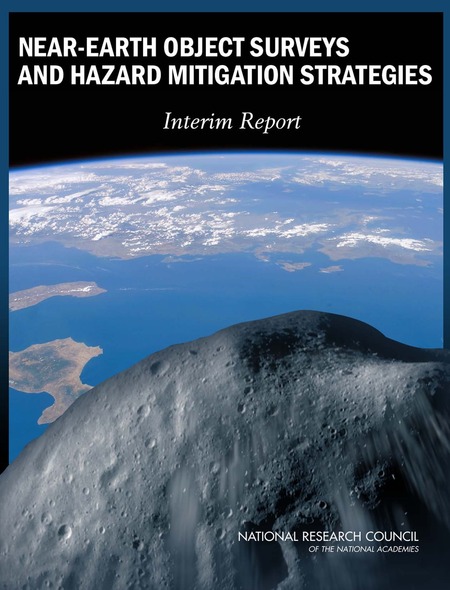 The United States is currently the only country with an active, government-sponsored effort to detect and track potentially hazardous near-Earth objects (NEOs). Congress has mandated that NASA detect and track 90 percent of NEOs that are 1 kilometer in diameter or larger. These objects represent a great potential hazard to life on Earth and could cause global destruction. NASA is close to accomplishing this goal. Congress has more recently mandated that by 2020 NASA should detect and track 90 percent of NEOs that are 140 meters in diameter or larger, a category of objects that is generally recognized to represent a very significant threat to life on Earth if they strike in or near urban areas. Achieving this goal may require the building of one or more additional observatories, possibly including a space-based observatory.

Congress directed NASA to ask the National Research Council to review NASA's near-Earth object programs. This interim report addresses some of the issues associated with the survey and detection of NEOs. The final report will contain findings and recommendations for survey and detection, characterization, and mitigation of near-Earth objects based on an integrated assessment of the problem.