Intangible Assets: Measuring and Enhancing Their Contribution to Corporate Value and Economic Growth (2009)

Get This Book
Visit NAP.edu/10766 to get more information about this book, to buy it in print, or to download it as a free PDF.
Page i Share Cite
Suggested Citation:"Front Matter." National Research Council. 2009. Intangible Assets: Measuring and Enhancing Their Contribution to Corporate Value and Economic Growth. Washington, DC: The National Academies Press. doi: 10.17226/12745.
×

Measuring and Enhancing Their Contribution to Corporate Value and Economic Growth

Support of the work of the Committee on National Statistics is provided by a consortium of federal agencies through a grant from the National Science Foundation (award number SES-0453930). Any opinions, findings, conclusions, or recommendations expressed in this publication are those of the author(s) and do not necessarily reflect the views of the organizations or agencies that provided support for the project.

Additional copies of this report are available from

The National Academies are grateful to the Bureau of Economic Analysis of the U.S. Department of Commerce and the Science Resources Statistics Division of the National Science Foundation for their support of this activity.

COMMITTEE FOR A CONFERENCE ON INTANGIBLE INVESTMENTS

Lyndon B. Johnson School of Public Affairs, University of Texas at Austin

Lyndon B. Johnson School of Public Affairs, University of Texas at Austin

Department of Economics and Joint Program in Survey Methodology, University of Maryland

Department of Economics, University of Maryland

In 2004, the U.S. Commerce Department’s Bureau of Economic Analysis (BEA), the agency responsible for the National Income and Product Accounts (NIPAs), began an effort to convert the NIPA treatment of research and development (R&D) expenditures from an annual business expense to an investment. The latter allows future returns, which contribute substantially to economic growth, to be considered. The first step, supported by the National Science Foundation, was to develop a Research and Development Satellite Account that would, with further refinements, eventually be incorporated into the NIPAs. With the completion of the first R&D satellite account in 2006, the lead BEA economist on the project, Sumiye Okubo, approached the National Academies’ Science, Technology, and Economic Policy (STEP) Board for assistance in organizing a workshop to evaluate the satellite account’s progress, and the National Academies agreed.

At roughly the same time, an influential study by Federal Reserve Board staff economists Carol Corrado and Daniel Sichel and University of Maryland economist Charles Hulten (CSH)1 estimated the nation’s investment in all intangibles (not limited just to scientific R&D) to exceed total investment in tangible assets (plant and equipment) and to account for a large share of economic growth. The CSH analysis included other categories such as expenditures on software, brand identification, employee training, and “nonscientific” R&D. The study was later closely replicated by analysts studying Japan and the United Kingdom, with similar findings.

Briefed on the CSH study, Senator Jeff Bingaman (D-NM), chairman of the Senate Energy Committee and a member of the Senate Finance Committee, encouraged BEA and STEP to broaden the meeting’s agenda to address intangible investments beyond R&D. The STEP Board, in consultation with the National Academies’ Committee on National Statistics (CNSTAT), readily agreed.

In addition to adopting a broad conception of intangible investments, the steering committee and staff adjusted the scope of the meeting agenda to include topics beyond measurement and accounting issues, which would promote discussion in several other directions:

Once the workshop was scheduled, four of the steering committee members—Corrado, Flamm, Fleming, and Jarboe—assumed roles as speakers or moderators; three other members—Manning, Scherer, and Schipper—were unfortunately unable to attend. However, all were helpful in identifying participants, framing the questions, and attracting an international contingent of participants to the conference. We are grateful to them and to Stephen Merrill for assembling an outstanding program and an engaged audience. The cooperation of BEA staff and Jonathan Epstein of Senator Bingaman’s staff was indispensable; and we are also indebted to Chris Mackie of the CNSTAT staff for preparing this summary of the proceedings.

This workshop summary was reviewed in draft form by individuals chosen for their diverse perspectives and technical expertise, in accordance with procedures approved by the Report Review Committee of the National Research Council (NRC). The purpose of this independent review is to provide candid and critical comments that assist the institution in making its report as sound as

possible, and to ensure that the report meets institutional standards for objectivity, evidence, and responsiveness to the study charge. The review comments and draft manuscript remain confidential to protect the integrity of the deliberative process.

Although the reviewers listed above have provided many constructive comments and suggestions, they were not asked to endorse the conclusions or recommendations, nor did they see the final draft of the report before its release. The review of this report was overseen by Mark B. Myers, Senior Vice President for Corporate Research and Technology, Xerox Corporation (retired). Appointed by the NRC, he was responsible for making certain that the independent examination of this report was carried out in accordance with institutional procedures and that all review comments were carefully considered. Responsibility for the final content of the report rests entirely with the author and the NRC.

Committee for a Conference on Intangible Investments

Next: 1 Overview »
Intangible Assets: Measuring and Enhancing Their Contribution to Corporate Value and Economic Growth Get This Book
× 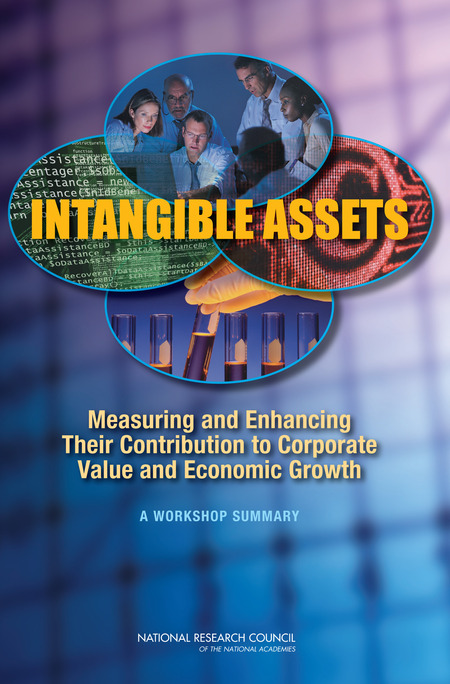 Intangible assets--which include computer software, research and development (R&D), intellectual property, workforce training, and spending to raise the efficiency and brand identification of firms--comprise a subset of services, which, in turn, accounts for three-quarters of all economic activity. Increasingly, intangibles are a principal driver of the competitiveness of U.S.-based firms, economic growth, and opportunities for U.S. workers. Yet, despite these developments, many intangible assets are not reported by companies, and, in the national economic accounts, they are treated as expenses rather than investments.

On June 23, 2008, a workshop was held to examine measurement of intangibles and their role in the U.S. and global economies. The workshop, summarized in the present volume, included discussions of a range of policy-relevant topics, including: what intangibles are and how they work; the variety and scale of emerging markets in intangibles; and what the government's role should be in supporting markets and promoting investment in intangibles.