Driving and the Built Environment: The Effects of Compact Development on Motorized Travel, Energy Use, and CO2 Emissions -- Special Report 298 (2009)

Get This Book
Visit NAP.edu/10766 to get more information about this book, to buy it in print, or to download it as a free PDF.
Page i Share
Suggested Citation:"Front Matter." Transportation Research Board and National Research Council. 2009. Driving and the Built Environment: The Effects of Compact Development on Motorized Travel, Energy Use, and CO2 Emissions -- Special Report 298. Washington, DC: The National Academies Press. doi: 10.17226/12747.
×

Driving and the Built Environment

The Effects of Compact Development on Motorized Travel, Energy Use, and CO2Emissions

Committee for the Study on the Relationships Among Development Patterns, Vehicle Miles Traveled, and Energy Consumption

This study was sponsored by the U.S. Department of Energy.

National Research Council (U.S.). Committee for the Study on the Relationships Among Development Patterns, Vehicle Miles Traveled, and Energy Consumption.

Driving and the built environment : the effects of compact development on motorized travel, energy use, and CO2 emissions / Committee for the Study on the Relationships Among Development Patterns, Vehicle Miles Traveled, and Energy Consumption.

The National Academy of Sciences is a private, nonprofit, self-perpetuating society of distinguished scholars engaged in scientific and engineering research, dedicated to the furtherance of science and technology and to their use for the general welfare. On the authority of the charter granted to it by the Congress in 1863, the Academy has a mandate that requires it to advise the federal government on scientific and technical matters. Dr. Ralph J. Cicerone is president of the National Academy of Sciences.

The Institute of Medicine was established in 1970 by the National Academy of Sciences to secure the services of eminent members of appropriate professions in the examination of policy matters pertaining to the health of the public. The Institute acts under the responsibility given to the National Academy of Sciences by its congressional charter to be an adviser to the federal government and, on its own initiative, to identify issues of medical care, research, and education. Dr. Harvey V. Fineberg is president of the Institute of Medicine.

Resources for the Future,

Committee for the Study on the Relationships Among Development Patterns, Vehicle Miles Traveled, and Energy Consumption

Board on Energy and Environmental Systems, Division on Engineering and Physical Sciences

Division on Earth and Life Studies*

In September 2008, the California state legislature passed the first state law (Senate Bill 375) to include land use policies directed at curbing urban sprawl and reducing automobile travel as part of the state’s ambitious strategy to reduce greenhouse gas (GHG) emissions. The legislature recognized that cleaner fuels and more fuel-efficient vehicles would not be sufficient to achieve the state’s goal of reducing GHG emissions to 1990 levels by 2020. The bill requires the state’s 18 metropolitan planning organizations to include the GHG emissions targets established by the state Air Resources Board (ARB) in regional transportation plans, and to offer incentives for local governments and developers to create more compact developments and provide transit and other opportunities for alternatives to automobile travel to help meet these targets. ARB currently estimates that reductions in vehicle miles traveled (VMT) resulting from these actions will contribute only about 3 percent of the 2020 targets—an estimate that reflects uncertainties in the state of knowledge about the impacts of more compact development patterns on travel and the short time horizon involved.

The present study, which was requested in the Energy Policy Act of 2005 (Section 1827) and funded by the U.S. Department of Energy, is aimed at establishing the scientific basis for and making appropriate

judgments about the relationships among development patterns, VMT, and energy consumption (see Chapter 1 and Appendix A for a full discussion of the study charge). The statement of task was expanded to include the impacts of development patterns on GHG emissions. To carry out the study charge, the Transportation Research Board (TRB) and the Board on Energy and Environmental Systems (BEES) of the Division on Engineering and Physical Sciences, both of the National Research Council (NRC), formed a committee of 12 experts. The panel was chaired by José A. Gómez-Ibáñez, Derek C. Bok Professor of Urban Planning and Public Policy at Harvard University. The study committee included members with expertise in transportation planning, metropolitan area planning, and land use; transportation behavior; transportation and land use modeling; geography; energy conservation; and economics.

The committee approached its task by commissioning five papers to explore various aspects of the study charge; conducting its own review of the literature; receiving informational briefings at its early meetings; and holding a meeting in Portland, Oregon, to examine firsthand the impacts of that area’s well-known growth management policies on development patterns and travel.

The five commissioned papers enhanced the committee’s own expertise in several areas. The first, by David Brownstone of the University of California, Irvine, provides a critical review of the literature on the relationship between compact development patterns and household VMT. The next two papers provide background information on historical and future trends, respectively, as they affect the potential for more compact development: Genevieve Giuliano, Ajay Agarwal, and Christian Redfearn of the University of Southern California examine recent spatial trends in U.S. metropolitan areas, with a focus on employment and housing; John Pitkin of Analysis and Forecasting, Inc., and Dowell Myers of the University of Southern California examine U.S. housing trends to 2050, with a focus on

demographic changes and immigration patterns that could affect future markets for more compact development. The fourth paper, by Michael S. Bronzini of George Mason University, explores what is currently known about the relationship among land use, urban form, and freight and commercial VMT in metropolitan areas. The final paper, by committee member Kara Kockelman and student researchers Matthew Bomberg, Melissa Thompson, and Charlotte Whitehead from the University of Texas at Austin, analyzes the potential reductions in energy use and GHG emissions from a wide range of policies and design strategies—such as vehicle technologies, fuel types, appliances, and home and building design—to provide a basis for comparison with potential reductions from changes in development patterns. Special thanks are due to Ms. Whitehead, student researcher in the Department of Civil, Architectural and Environmental Engineering, who conducted numerous analyses for the committee on projected savings in residential building energy use and carbon dioxide emissions from more compact development strategies. The papers, listed in Appendix B, were reviewed by the committee and revised by the authors. Because of their length and printing costs, they are available only in electronic form. The reader is cautioned that the interpretations and conclusions drawn in the papers are those of the authors. The key findings endorsed by the committee appear in the body of the report.

The briefings received at the committee’s initial meetings served as an invaluable supplement to its own expertise. In particular, the committee would like to thank Stephanie Potts, program associate of Smart Growth America, who provided her perspective on the committee’s charge; Reid Ewing, professor in the College of Architecture and Planning, University of Utah, who provided an overview of the land use–transportation literature; John Holtzclaw, consultant to the Natural Resources Defense Council, who spoke about location efficiency models; and John Landis, Chair of the

Department of City and Regional Planning at the University of Pennsylvania, who presented his analysis of spatial changes in population and employment for a sample of metropolitan areas over time. Thanks are extended as well to committee member Andrew Cotugno, Director of Metro’s Planning Department at the time, and his staff for hosting the committee’s third meeting in Portland, where the committee visited several neighborhood compact development projects and was briefed on the impacts of Portland’s urban growth boundary on regional land use patterns and travel. Finally, the committee thanks the following federal agency staff for their help in launching the study and their continuing assistance throughout: Philip D. Patterson, Jr., of the U.S. Department of Energy; Megan Susman and John V. Thomas of the U.S. Environmental Protection Agency; Frederick Ducca of the U.S. Department of Transportation (USDOT); and Ed Weiner, formerly of USDOT.

This report has been reviewed in draft form by individuals chosen for their diverse perspectives and technical expertise, in accordance with procedures approved by NRC’s Report Review Committee. The purpose of this independent review is to provide candid and critical comments that assist the authors and NRC in making the published report as sound as possible and to ensure that the report meets institutional standards for objectivity, evidence, and responsiveness to the study charge. The contents of the review comments and draft manuscript remain confidential to protect the integrity of the deliberative process. The committee thanks the following individuals for their participation in the review of this report: A. Ray Chamberlain, Parsons Brinckerhoff, Fort Collins, Colorado; Randall Crane, School of Public Policy and Social Science Research, University of California, Los Angeles; Paul A. DeCotis, Office of the Governor, State of New York, Albany; Robert T. Dunphy, Urban Land Institute (retired), Washington, D.C.; Gordon Garry, Sacramento Area

Although the reviewers listed above provided many constructive comments and suggestions, they were not asked to endorse the committee’s conclusions or recommendations, nor did they see the final draft of the report before its release. The review of this report was overseen by Maxine L. Savitz, Honeywell Inc. (retired), Los Angeles, California, and C. Michael Walton, University of Texas at Austin. Appointed by NRC, they were responsible for making certain that an independent examination of the report was carried out in accordance with institutional procedures and that all review comments were carefully considered. Responsibility for the final content of this report rests entirely with the authoring committee and the institution.

Stephen R. Godwin, Director of Studies and Special Programs at TRB, and Nancy P. Humphrey, TRB, managed the study. Ms. Humphrey, with assistance from Laurie Geller, drafted the final report under the guidance of the committee and the supervision of Stephen Godwin. James Zucchetto, Director of BEES, served as liaison to the committee. Suzanne Schneider, Associate Executive Director of TRB, managed the report review process. Special appreciation is expressed to Rona Briere, who edited the report; and to Norman Solomon, for editorial production; Juanita Green, for managing the design, typesetting, and printing of the book; and Jennifer Weeks, who formatted the manuscript for prepublication web posting, under the supervision of Javy Awan, Director of Publications. Amelia Mathis assisted with meeting arrangements, contracts with paper authors, and communications with committee members. Alisa Decatur provided word processing support for preparation of the final manuscript.

Next: Summary »
Driving and the Built Environment: The Effects of Compact Development on Motorized Travel, Energy Use, and CO2 Emissions -- Special Report 298 Get This Book
× 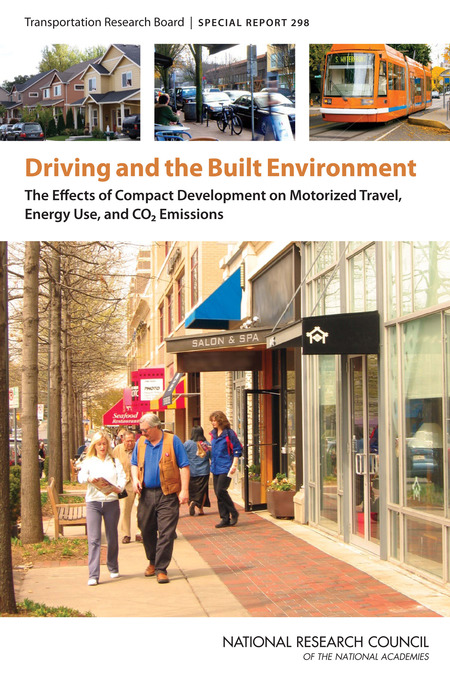 TRB Special Report 298: Driving and the Built Environment: Effects of Compact Development on Motorized Travel, Energy Use, and CO2 Emissions examines the relationship between land development patterns and vehicle miles traveled (VMT) in the United States to assess whether petroleum use, and by extension greenhouse gas (GHG) emissions, could be reduced by changes in the design of development patterns. The report estimates the contributions that changes in residential and mixed-use development patterns and transit investments could make in reducing VMT by 2030 and 2050, and the impact this could have in meeting future transportation-related GHG reduction goals.