Advancing the Science of Climate Change (2010)

Get This Book
Visit NAP.edu/10766 to get more information about this book, to buy it in print, or to download it as a free PDF.
« Previous: Appendix D: Uncertainty Terminology
Page 493 Share Cite
Suggested Citation:"Appendix E: The United States Global Change Research Program." National Research Council. 2010. Advancing the Science of Climate Change. Washington, DC: The National Academies Press. doi: 10.17226/12782.
×

The commitment of the United States to a national research program on climate began with the passage by Congress of the National Climate Program Act in 1978. The act was designed to establish a comprehensive and coordinated national climate policy and program. The following year, the National Research Council released Strategy for the National Climate Program (NRC, 1980c), the first of a number of reviews and advisory documents prepared by the NRC on the program.

Even though the National Climate Program Act established the National Climate Program Office as an interagency program, a subsequent review of the program by the NRC several years later (NRC, 1986) suggested that, among other problems, the Act’s budget mechanism did not facilitate a coordinated and integrated program because each department and agency could and often did act independently in its budget submission. Around the same time, climate and global change issues began to rise on the scientific, political, and policy agendas. Driven by a substantial increase in the scientific literature, several high-profile discussions in Congress, and a growing recognition of the inherently interdisciplinary and interconnected nature of climate and other global changes, an NRC report in 1988, Toward an Understanding of Global Change: Initial Priorities for U.S .Contributions to the International Geosphere-Biosphere Program (NRC, 1988), proposed a scientific framework to improve understanding of climate and other global environmental changes.

The Global Change Research Act of 1990 as amended1 is the currently mandated framework within which climate and global change research is implemented among U.S. federal departments and agencies. Unless altered by subsequent legislation, the Global Change Research Act of 1990 provides most of the necessary authority for a strategically integrated climate and global change research program. The Act sets the strategies and mechanisms for establishing the research and for setting priorities, stating the following inter alia:

and the agency representatives in interagency Committee2 of the Program “shall be high ranking officials of their agency or department, wherever possible the head of the portion of that agency or department that is most relevant to the purpose of the program as describe in the Act.” Further, the 1990 Act mandated that the “President should direct the Secretary of State, in cooperation with the Committee, to initiate discussions with other nations leading toward international protocols and other agreements to coordinate global change research activities … the purpose of which is to: (i) promote international, intergovernmental cooperation on global change research; (ii) involve scientists and policymakers from developing nations in such cooperative global change research programs; and (iii) promote international efforts to provide technical and other assistance to developing nations which will facilitate improvements in their domestic standard of living while minimizing damage to the global or regional environment.”

President, (ii) the participating agencies and departments, (iii) the committee structure under the NSTC, and (iv) the NAS through the NRC committees and boards and hence the science communities of the nation. The Act states the program of research “consider and utilize, as appropriate, reports and studies conducted by Federal agencies and departments, the NRC and other entities.” Hence, the research program should be guided by NRC recommendations, and the NRC may need to reassess the means by which it provides advice on program priorities.

Service6 has developed a continuing oversight and review process to further document progress and accomplishments.

In the late 1990s, the USGCRP articulated a new strategic plan that focused explicitly on providing information for decision makers at regional scales. Then, in 2001, in response to a variety of inputs (including NRC, 2001), the George W. Bush Administration introduced the Climate Change Research Initiative (CCRI) to focus on key uncertainties associated with climate variability and climate change at global scales. In 2002, the administration integrated the USGCRP and the CCRI into the Climate Change Science Program (CCSP). The CCSP developed a revised strategic plan for the program that contained a focus on decision-support activities, including a series of 21 Synthesis and Assessment Products, an emphasis on adaptive management to support natural resource agencies, and comparative evaluations of response measures using integrated assessment models, scenarios, and other methods (CCSP, 2003). The National Research Council was involved in reviewing these plans (NRC, 2003a, 2004b) and later in helping to develop metrics to evaluate the progress of the program (NRC, 2005f).

With federal support ranging from $2.2 billion in 1990 (in 2008 dollars) to $1.8 billion in 2008, the USGCRP (known as the U.S. Climate Change Science Program from 2002 through 2008) has made enormous contributions to the understanding of climate change over the past two decades and provided key results and support for the IPCC. Congress, especially the Committee on Science and Technology of the House of Representatives, provided active oversight of the program in its early years, holding numerous hearings that sought to ensure compliance with the mandates of the Act. The annual budgetary guidance from the program committee to the participating agencies was a particularly important aspect of the interagency process, because it resulted in the implementation during the late 1980s and early 1990s of a process that had more direct budgetary responsibility for the program’s content and budget.

Next: Appendix F: Geoengineering Options to Respond to Climate Change: Steps to Establish a Research Agenda »
Advancing the Science of Climate Change Get This Book
× 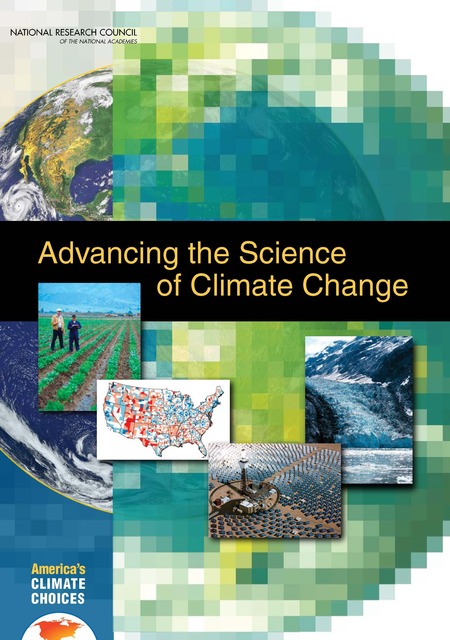 Climate change is occurring, is caused largely by human activities, and poses significant risks for--and in many cases is already affecting--a broad range of human and natural systems. The compelling case for these conclusions is provided in Advancing the Science of Climate Change, part of a congressionally requested suite of studies known as America's Climate Choices. While noting that there is always more to learn and that the scientific process is never closed, the book shows that hypotheses about climate change are supported by multiple lines of evidence and have stood firm in the face of serious debate and careful evaluation of alternative explanations.

As decision makers respond to these risks, the nation's scientific enterprise can contribute through research that improves understanding of the causes and consequences of climate change and also is useful to decision makers at the local, regional, national, and international levels. The book identifies decisions being made in 12 sectors, ranging from agriculture to transportation, to identify decisions being made in response to climate change.

Advancing the Science of Climate Change calls for a single federal entity or program to coordinate a national, multidisciplinary research effort aimed at improving both understanding and responses to climate change. Seven cross-cutting research themes are identified to support this scientific enterprise. In addition, leaders of federal climate research should redouble efforts to deploy a comprehensive climate observing system, improve climate models and other analytical tools, invest in human capital, and improve linkages between research and decisions by forming partnerships with action-oriented programs.