Hidden Costs of Energy: Unpriced Consequences of Energy Production and Use (2010)

Chapter:Appendix B: A Simple Diagrammatic Example of an Externality

Get This Book
Visit NAP.edu/10766 to get more information about this book, to buy it in print, or to download it as a free PDF.
« Previous: Appendix A: Biographic Information on the Committee on Health, Environmental, and Other External Costs and Benefits of Energy Production and Consumption
Page 420 Share Cite
Suggested Citation:"Appendix B: A Simple Diagrammatic Example of an Externality." National Research Council. 2010. Hidden Costs of Energy: Unpriced Consequences of Energy Production and Use. Washington, DC: The National Academies Press. doi: 10.17226/12794.
×

B
A Simple Diagrammatic Example of an Externality

A simple stylized example helps illustrate the concept of an externality. Consider a firm generating electricity that releases air pollutants as a by-product. It can carry out various activities to abate pollution. Initial pollution reductions are relatively inexpensive to carry out, but costs rise as the firm reduces its pollution further. To illustrate that relationship, Figure B-1 diagrams pollution abatement along the horizontal axis and measures of cost per ton of abatement along the vertical axis. The figure provides an alternative approach to that shown in Figure 1-1 of Chapter 1 but leads to the same conclusion. Whereas Figure 1-1 focuses on optimal pollution levels, the discussion in this appendix focuses on optimal abatement activities. Both approaches are used in the literature.

The upward sloping line labeled “Marginal Abatement Cost” measures the cost to the firm for each additional ton of pollution reduction. In the absence of any policy intervention, the hypothetical firm will engage in no pollution abatement and incur no private abatement costs.

The horizontal line labeled “Marginal Benefit” is a measure of the reduction in aggregate damages across all people affected by pollution from this plant. The reduction could be a combination of reduced mortality risk and reduced morbidity summed over different populations. The marginal benefit of pollution abatement is simply a restatement of the marginal damages from pollution. Each ton of pollution avoided reduces incremental damages to society.

For purposes of this example, we assume that the marginal benefit of pollution abatement is constant and equal to $25 per ton of abated pollution. Equivalently, the dollar value of the marginal damages of pollution for this plant is $25 per ton. In practice, the shape of this curve will be pollutant-specific (and might well be location- and time-specific).

Society is made better off if the firm increases its abatement from 0 to 100 tons. The benefit to society is the avoided damages of $25 per ton times the 100 tons abated, or $2,500. The cost to the firm of reducing its pollution is the sum of the incremental abatement costs. This is the area under the marginal abatement curve and it equals $1,250. The net gain to society following the firm’s abatement action is $1,250.

Note, however, that the illustrative example does not include consider-

ation of important distributional issues by simply summing the costs and benefits of pollution reduction. Distributional considerations can be taken into account. They will affect the economically optimal level of pollution abatement in the example but not the fundamental concepts that the example illustrates.

Next: Appendix C: Description of the Air Pollution Emission Experiments and Policy (APEEP) Model and Its Application »
Hidden Costs of Energy: Unpriced Consequences of Energy Production and Use Get This Book
× 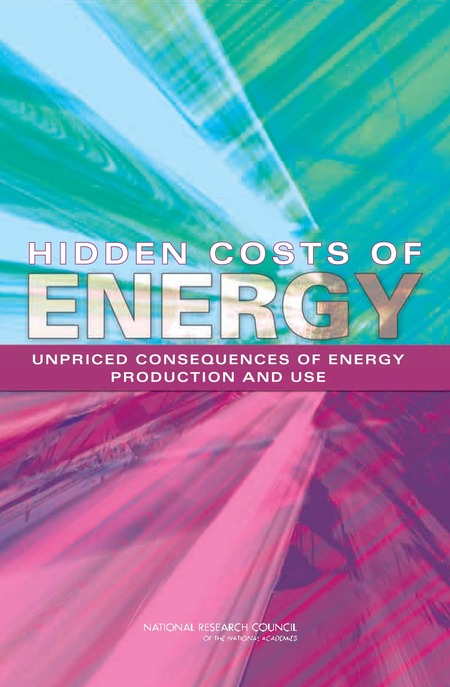 Despite the many benefits of energy, most of which are reflected in energy market prices, the production, distribution, and use of energy causes negative effects. Many of these negative effects are not reflected in energy market prices. When market failures like this occur, there may be a case for government interventions in the form of regulations, taxes, fees, tradable permits, or other instruments that will motivate recognition of these external or hidden costs.

The Hidden Costs of Energy defines and evaluates key external costs and benefits that are associated with the production, distribution, and use of energy, but are not reflected in market prices. The damage estimates presented are substantial and reflect damages from air pollution associated with electricity generation, motor vehicle transportation, and heat generation. The book also considers other effects not quantified in dollar amounts, such as damages from climate change, effects of some air pollutants such as mercury, and risks to national security.

While not a comprehensive guide to policy, this analysis indicates that major initiatives to further reduce other emissions, improve energy efficiency, or shift to a cleaner electricity generating mix could substantially reduce the damages of external effects. A first step in minimizing the adverse consequences of new energy technologies is to better understand these external effects and damages. The Hidden Costs of Energy will therefore be a vital informational tool for government policy makers, scientists, and economists in even the earliest stages of research and development on energy technologies.