Get This Book
Visit NAP.edu/10766 to get more information about this book, to buy it in print, or to download it as a free PDF.
« Previous: Front Matter
Page 1 Share Cite
Suggested Citation:"Summary." National Research Council. 2010. Transitions to Alternative Transportation Technologies—Plug-in Hybrid Electric Vehicles. Washington, DC: The National Academies Press. doi: 10.17226/12826.
×

The nation has compelling reasons to reduce its consumption of oil and emissions of carbon dioxide. Plug-in hybrid electric vehicles (PHEVs) promise to contribute to both goals by allowing some miles to be driven on electricity drawn from the grid, with an internal combustion engine that kicks in when the batteries are discharged. However, while battery technology has made great strides in recent years, batteries are still very expensive.

This report builds on a 2008 National Research Council (NRC) report on hydrogen fuel cell vehicles (HFCVs).1 In accordance with the committee’s statement of task, the present report

A variety of PHEV configurations and electric driving ranges are under consideration by vehicle manufacturers. This report considers two vehicles. One, the PHEV-10, uses hybrid electric vehicle (HEV) technology similar to that used in the Toyota Prius. However, it has a larger battery than an HEV to allow 10 miles of driving powered by electricity only and a gasoline engine that drives the wheels in parallel with the electric motor when power demand is high or the batteries are discharged. The other vehicle, the PHEV-40, is similar to the Chevrolet Volt. It has a 40-mile electric range, a larger electric motor, and a much larger battery than the PHEV-10. In the PHEV-40, the electric motor provides all the propulsion; the gasoline engine drives a generator that powers the motor and keeps the batteries charged above some minimum level.

Batteries are the key determinant of the cost and electric driving range of PHEVs. All proposed PHEVs will use lithium-ion (Li-ion) batteries, similar to the technology now used in laptop computers, power tools, and other small devices. Several Li-ion chemistries are under development with the objective of optimizing performance for automotive propulsion. None yet meet all essential goals for cost, battery life, and weight. Cost is expected to be the most difficult goal.

Costs will decline with technology improvements and economies of scale, but Li-ion batteries based on similar technology are already being produced in great numbers and are well along their learning curves. The steep early drop in cost often experienced with new technologies is not likely. The incremental cost to manufacture these vehicles is expected to decline by about one third by 2020 but only slowly thereafter, as listed in Table S.1.

It is possible that breakthroughs in battery technology will greatly lower the cost. At this point, however, it is not clear what sorts of breakthroughs might become commercially viable. Furthermore, even if they occur within the next decade, they are unlikely to have much impact before 2030, because it takes many years to get large numbers of vehicles incorporating new technology on the road.

Grid capacity will be available to charge millions of PHEVs if they are charged at night. Power demand varies during the day, peaking during the afternoon and reaching a low point after midnight. It also varies over the year, with demand highest on summer afternoons because of air conditioning loads. Parts of the U.S. electric power system are at full capacity during these hours of highest demand, and additional loads could threaten reliability unless new capacity is added. At night, however, the system may operate at less than 50 percent of capacity, and the cost of producing electricity is much lower than during peak hours. Drivers paying a constant rate per kilowatt-hour of electricity are likely to charge their vehicles whenever they have convenient access to an electric outlet, potentially increasing electricity demand during peak hours. Smart meters with time-of-use pricing would be one way of encouraging drivers to delay charging until electricity demand is lower.

Generating electricity to replace the gasoline that a car would have used emits some greenhouse gases (GHG), especially CO2. About half the nation’s electricity is produced from coal-fired power plants, which are large emitters of CO2. However, the overall efficiency of electric vehicles is greater than that of conventional vehicles, so emissions may be reduced to some extent. Large savings on emissions will require decarbonizing the electric system, such as by using nuclear power or renewable energy generation or by capturing and sequestering the CO2 emitted by fossil fuel plants.

Penetration rates for the PHEV-10 and the PHEV-40 were compared to a Reference Case that assumes high oil prices and fuel economy standards specified by the Energy Independence and Security Act of 2007 (with modest increases after 2020, when those standards level off), as described in the 2008 Hydrogen Report. The Maximum Practical scenario is the fastest rate at which the committee concluded that PHEVs could penetrate the market considering various manufacturing and market barriers; it leads to about 40 million PHEVs by 2030 in a fleet of about 300 million vehicles.2 A more probable scenario leads to about 13 million PHEVs by 2030. Figure S.1 shows the number of PHEVs on the road at the two rates.

Figure S.3 shows the well-to-wheels GHG emissions of the light-duty vehicle fleet for the PHEV scenarios and compares them to the Reference Case. PHEVs show less improvement in GHG emissions than in gasoline consumption because of the additional emissions from electricity generation. If carbon emissions from the electric sector are limited, the reductions in Figure S.3 would be greater, almost following the reductions in gasoline use in Figure S.2.

FIGURE S.1 Projections of number of PHEVs in the U.S. light-duty fleet.

FIGURE S.2 Gasoline use for PHEV-10s and PHEV-40s introduced at the Maximum Practical rate and the Efficiency Case from the 2008 Hydrogen Report. 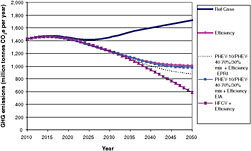 The PHEV projection cases considered only the impact of a given number of PHEVs regardless of cost. PHEVs will be expensive relative to conventional vehicles, largely because the batteries are costly. They are cheaper to operate (driving costs per mile are less than for conventional vehicles), and eventually vehicle costs may decline sufficiently to achieve life-cycle cost competitiveness, as shown in Tables S.1 and S.2. A transition period with substantial policy intervention and/or financial assistance for buyers from government and possibly manufacturers will be necessary to support either of the penetration scenarios in Figure S.1 until the higher costs of PHEVs are balanced by their fuel savings. The break-even year is defined here as the year when the fuel savings of the entire fleet of PHEVs equals the subsidies required that year to make PHEVs appear cost-competitive to potential buyers relative to conventional vehicles.

Transition costs will depend on how fast vehicle costs decline and how fast PHEVs penetrate the market. Table S.2 shows the break-even year and transition cost for the PHEV-40 for three Maximum Practical penetration scenarios: for the committee’s optimistic assessment of technical progress; if DOE’s goals for costs are met by 2020; and if oil prices are much higher than assumed for the base case. PHEV-40s achieve breakeven in 2040 for the committee’s Optimistic technical progress, but in 2024 if DOE’s goals are achieved, illustrating the potential importance of technology breakthroughs. Similarly, the required subsidies are much lower if oil prices are very high. PHEV-10s achieve breakeven much sooner and with much lower subsidies when analyzed on a basis comparable to PHEV-40s, but also provide lower oil and carbon emission benefits. The final two columns of Table S.2 show results for a mix of PHEV-40s and PHEV-10s, which are between those of each type analyzed alone, and for a slower growth rate with less optimistic technological progress.

Finally, the committee included combinations of technologies to reduce oil consumption in the light-duty vehicle fleet, as was done in the 2008 Hydrogen Report. Advanced conventional vehicles (including HEVs) operating in part on biofuels could cut oil consumption by more than 60 percent by 2050, as shown in Figure S.4. Replacing some of those HEVs with PHEVs, especially PHEV-40s, could reduce consumption to even lower levels. Employing HFCVs instead of PHEVs, however, could eliminate oil use in the light-duty vehicle fleet.

undergone expected degradation over time. Costs are expected to decline by about 35 percent by 2020 but more slowly thereafter. Projections of future battery pack costs are uncertain, as they depend on the rate of improvements in battery technology and manufacturing techniques, potential breakthroughs in new technology, possible relaxation of battery protection parameters as experience is gained, and the level of production, among other factors. Further research is needed to reduce costs and achieve breakthroughs in battery technology.

depends on rapid technological progress, increased government support, and consumer acceptance. A more realistic penetration rate would result in 13 million PHEVs by 2030 out of about 300 million vehicles on the road, which still assumes that current levels of government support will continue for several decades.

Next: 1 Introduction »
Transitions to Alternative Transportation Technologies—Plug-in Hybrid Electric Vehicles Get This Book
× 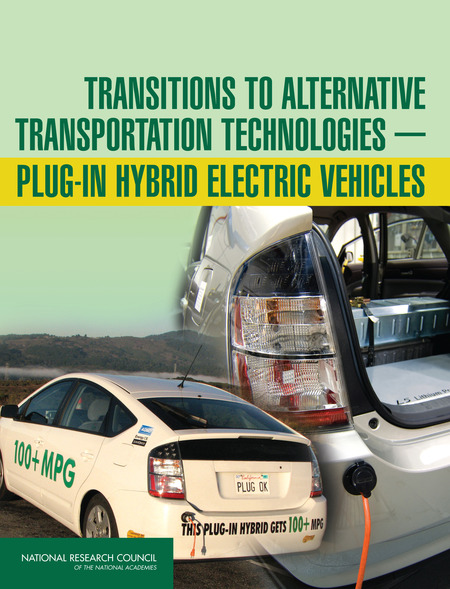 The nation has compelling reasons to reduce its consumption of oil and emissions of carbon dioxide. Plug-in hybrid electric vehicles (PHEVs) promise to contribute to both goals by allowing some miles to be driven on electricity drawn from the grid, with an internal combustion engine that kicks in when the batteries are discharged. However, while battery technology has made great strides in recent years, batteries are still very expensive.

Transitions to Alternative Transportation Technologies--Plug-in Hybrid Electric Vehicles builds on a 2008 National Research Council report on hydrogen fuel cell vehicles. The present volume reviews the current and projected technology status of PHEVs; considers the factors that will affect how rapidly PHEVs could enter the marketplace, including the interface with the electric transmission and distribution system; determines a maximum practical penetration rate for PHEVs consistent with the time frame and factors considered in the 2008 Hydrogen report; and incorporates PHEVs into the models used in the hydrogen study to estimate the costs and impacts on petroleum consumption and carbon dioxide emissions.