The Dragon and the Elephant: Understanding the Development of Innovation Capacity in China and India: Summary of a Conference (2010)

Get This Book
Visit NAP.edu/10766 to get more information about this book, to buy it in print, or to download it as a free PDF.
« Previous: 5 Research and Commercialization Infrastructure
Page 27 Share Cite
Suggested Citation:"6 The Legal Environment: Competition Policy, Standards, and Intellectual Property." National Research Council. 2010. The Dragon and the Elephant: Understanding the Development of Innovation Capacity in China and India: Summary of a Conference. Washington, DC: The National Academies Press. doi: 10.17226/12873.
×

A country that aspires to become a leader in innovation not only must have a well-developed research and commercialization infrastructure and ready availability of investment capital but also must create a legal environment that is conducive to innovation. As STEP board member and session moderator Alan Wm. Wolff noted in his opening remarks, competition policy, standards, and intellectual policy are among the policy levers that countries use to influence innovation. Microsoft or Intel or a biotechnology firm may choose to invest anywhere in the world; but wherever they go, they will be governed by local rules of intellectual property protection and competition policy and technical standards that are likely to reflect local conditions even if they adhere to international standards. The key question for any policy, he said, is whether it promotes innovation. “The impact of these policies can be very positive. They can also be distinctly negative.”

The speakers in Session 6 examined some aspects of competition, standards, and the legal environments in China and India in the context of their contribution to innovation and treatment of foreign direct investment in the two countries.

Following his introductory remarks, Alan Wolff discussed recent developments in China’s competition policy—in particular the newly enacted anti-monopoly law (AML), drafted in a relatively open process, allowing foreign firm participation. Foreign direct investment has been essential to China’s development and growth, but now the government of China seeks an “objective symbiosis” between international investment and indigenous innovation. This will entail stronger intellectual property rights and stronger, more vigorously enforced anti-trust laws. Under the new law, a key determinant of market dominance is whether a company has 50 percent of the market. Abuse of such a dominant position can involve sustaining unfairly high prices or refusing to trade with related parties without justification.

In the discussions leading up to the new AML, observers became concerned about how the law will apply to multinational firms and whether it will be used to restrict them unfairly relative to domestic firms. For example, industries dominated by state-owned enterprises are exempt from the law’s application altogether.

China is wary of the international standards setting process as a result of its experience with Wired Authentication and Privacy Infrastructure (WAPI), DVD technology, and video

compression. Its proposed WAPI standard was rejected internationally in March 2006. China’s strategy on standards so far has had disappointing results. Still, many Chinese believe that the country has not only a world class capacity for technological innovation but also enormous market power for influencing technical standards and that the two should be developed and exploited hand in hand. The current long-term plan (2006-2020) calls for moving the economy from “Made in China” to “Created in China.” In the meantime, against an international background of institutional fluidity, China has pushed for open standards and open source development.

Chinese standards have generally not been successful in first-tier markets, but may fare better in the relatively near term in second- and third-tier markets. In Suttmeier’s view, the United States and other advanced countries should engage with China and anticipate a broader “regime insurgency” against the role of the World Trade Organization and other multilateral bodies in setting the rules.

PATENTS AND INNOVATION IN INDIA

Shamnad Basheer, visiting George Washington University law professor, spoke on the evolution of the Indian patent system, which has been driven by the pharmaceutical industry, the dominant patent filing sector (Figure 9). As recently as the 1970 Patent Act, India departed from international norms advocated by the United States in replacing product patents with process patents for pharmaceuticals. When firms understood they could then legally make existing products simply by changing the production process, huge growth followed for the Indian generic manufacturers. Ranbaxy’s production of Cefaclor, an antibiotic, is an example of a commercially successful Indian product based on that strategy.

By accepting the 1994 Agreement on Trade-Related Aspects of Intellectual Property (TRIPS) as part of the Uruguay Round trade negotiations, India was obliged to reintroduce pharmaceutical product patents, over huge resistance, and finally did so in the Patent Act of 2005. How does the 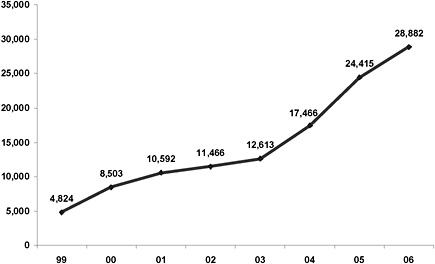 2005 law change business strategies? In particular, does it mean Indian firms will develop more R&D-based innovative products? The answers are not yet clear, in part because of the slowness of the Indian Patent Office, which has only 135 examiners to handle 26,000 patent applications a year and the many post-grant challenges that the system allows. A modernization initiative is now attempting to reduce the time to patent, but it will be slow-going for some time to come.

Bhaven Sampat of Columbia University gave an overview of the top patent applicants in India by volume. They are dominated by multinational pharmaceutical, information technology, and telecommunications firms. Bayer, Pfizer, Honda, Qualcomm, Novartis, Glaxo SmithKline, Microsoft, Samsung, Johnson & Johnson, Merck and Ericsson are among the top 20 patenting entities. Many of their applications are defensive, designed to protect existing products. Indian patent law matters primarily in sectors where the Indian market is gaining a significant share of the global market. IT firms, for example, are not filing many patent applications in India.

Soonhee Jang, an Eli Lilly and Company corporate intellectual property attorney, provided an overview of Chinese patent law. (In 2006, Lilly was among the top multinational pharmaceutical companies in China, with more than 1,000 employees in over 50 cities.) Jang pointed out that China has a civil law system, in contrast to the common law system of the United States. Common law systems derive general rules from specific cases, while civil law systems usually start with an abstract rule that judges interpret and apply in specific cases.

Chinese intellectual property law has evolved repeatedly since 1985, when no patent law existed. The 1985 Act was amended in 1992 and again in 2000, in anticipation of China’s entry into the World Trade Organization. In 2006, a third set of amendments was adopted. Meanwhile the State Intellectual Patent Office (SIPO) has grown quickly in numbers and sophistication. In 2006 alone over 500 new examiners were hired, and cumulatively over 1.7 million patents have been granted. Enforcement will and capacity have developed more slowly.

Chinese law provides for three categories of patents—invention patents (affording protection for 20 years), utility model patents (10 years), and design patents (10 years). The latter two types of patents can be obtained more readily than an invention patent, usually in a matter of months (Table 2). Applicants generally seek both a utility and an invention patent at the same time, acquiring the protection of a utility patent relatively quickly and than abandoning it when the longer-term invention patent issues. Patentability criteria include novelty, inventiveness and practical applicability. Unlike the United States there is no provision for term extension for patents on regulated pharmaceuticals, as authorities want generic products to appear in the market as quickly as possible.

Compensation schemes for rewarding inventors vary and what constitutes reasonable remuneration is sometimes controversial, although a common basis is 2 percent of a firm’s after-tax profits on an invention. It seems unlikely that uncertainty about employee compensation is a deterrent to inventiveness and innovation. Between 2000 and 2006, patent applications have increased more than 20 percent every year; filings by Chinese nationals are outpacing those of foreign-owned firms (Figure 10). The top international filers are Japanese, United States, South Korean, and German nationals in that order.

In discussion, the experts on the Chinese and Indian patent systems agreed that it is premature to judge whether the current patent regimes in both countries are providing an impetus to innovative activity. On the other hand, foreign direct investors are voting on the newly strengthened patent systems “with their feet,” investing heavily in both China and India. 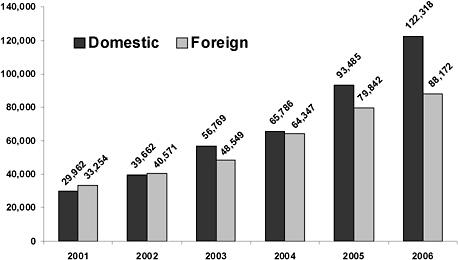 Next: 7 Multinationals' Experience »
The Dragon and the Elephant: Understanding the Development of Innovation Capacity in China and India: Summary of a Conference Get This Book
× 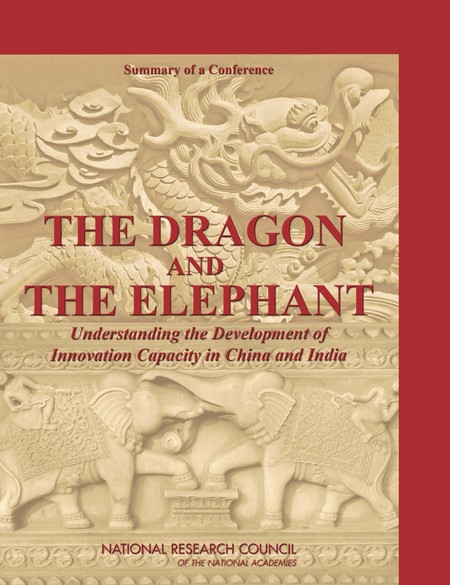 The return of the once-dormant economies of China and India to dynamism and growth is one of the most remarkable stories in recent history. The two countries are home to nearly 40 percent of the world's population, but until recently neither had played an influential role in the contemporary global economy.

In the past two decades, China and India have liberalized internal economic policy, treatment of foreign investment, and trade, and have experienced economic growth at sustained high rates. From the point of view of the United States, however, the most important development in the Chinese and Indian economies in the long term may be the strides they are making in developing their own domestic innovation capacities. After a long period of underinvestment, both countries have committed to growing their science and education systems to bolster research and further economic expansion.

Some observers of the recent growth have said that both countries are surging in their efforts to spur innovation; others have emphasized the potential of one country over the other; and still others have suggested that both China and India have a long way to go before achieving innovation-driven growth. With such a range of views, The National Academies set out to describe developments in both countries, in relation to each other and the rest of the world, by organizing a conference in Washington, D.C. The conference, summarized in this volume, discussed recent changes at both the macroeconomic level and also in selected industries, and explored the causes and implications of those changes.