Chapter:2 The Legal Context of This Report

Get This Book
Visit NAP.edu/10766 to get more information about this book, to buy it in print, or to download it as a free PDF.
« Previous: 1 Introduction
Page 17 Share Cite
Suggested Citation:"2 The Legal Context of This Report." National Research Council. 2010. A Scientific Assessment of Alternatives for Reducing Water Management Effects on Threatened and Endangered Fishes in California's Bay-Delta. Washington, DC: The National Academies Press. doi: 10.17226/12881.
×

2
The Legal Context of This Report

SCOPE OF THE COMMITTEE’S TASK

The committee was asked “to review the scientific basis of actions that have been and could be taken to simultaneously achieve both an environmentally sustainable Bay-Delta and a reliable water supply.” While this committee’s review is scientific, and not legal, the committee nonetheless recognizes the importance of the legal context within which its evaluation takes place. The standard of review applicable in legal challenges to the opinions and associated RPAs provides a useful reference. In such lawsuits, courts will invalidate the RPAs only if they are demonstrated to be “arbitrary, capricious, an abuse of discretion, or otherwise not in accordance with law” (Administrative Procedure Act, 5 U.S.C. § 706(2)(A)). Courts are reluctant to second-guess technical agency judgments and may not substitute their judgment for that of the agency, particularly in cases where there are scientific uncertainty and differing scientific views. See Aluminum Co. of America v. Bonneville Power Administration, 175 F.3d 1156 (9th Cir. 1999); Trout Unlimited v. Lohn, 559 F.3d 946 (9th Cir. 2009). Thus, while the committee can come to different conclusions than the agencies did in their biological opinions, that would not be a legal justification for deeming them inadequate, as long as the agencies adequately considered the available scientific data and their conclusions are supportable by the evidence. Similarly, the RPAs should not be considered legally inadequate simply because different alternatives could be scientifically justified, as long as the agencies could reasonably believe that their RPAs would avoid the likelihood of jeopardy.

Some aspects of the committee’s task require it to make determinations beyond the scope of the agencies’ legal obligations or authority when issuing a biological opinion and RPAs. For example, the committee’s charge includes consideration of the effects of stressors such as pesticides, ammonium, and invasive species on federally listed and other at-risk species in the Bay-Delta—stressors likely beyond the action agencies’ legal authority to regulate, unless the effects are indirectly changed by the RPAs. Any such considerations by this

committee in this or in its second report would have no bearing on the question of whether or not the biological opinions and RPAs are legally adequate. Instead, such considerations should be interpreted in contexts apart from the biological opinion and RPAs, such as the Bay-Delta Conservation Program (development of a habitat conservation plan); the State Water Resources Control Board’s development of flow criteria for the delta; the Delta Stewardship Council’s development of a delta plan; and others.

In each biological opinion, the relevant wildlife agency concluded that the proposed federal action—implementation of the water projects’ operations plan—was likely to “jeopardize” the continued existence of species listed as endangered and to adversely modify their critical habitat. This would violate Section 7 of the Endangered Species Act (ESA), which requires agencies to “insure” that any actions they authorize, fund, or carry out are not likely to jeopardize endangered species or to destroy or adversely modify the species’ critical habitat (16 U.S.C. § 1536 (a) (2)). As defined by agency regulations, “jeopardy” means that the proposed action “reasonably would be expected, directly or indirectly, to reduce appreciably the likelihood of both the survival and recovery of [relevant endangered species] in the wild by reducing the reproduction, numbers, or distribution of that species” (50 C.F.R. § 402.02). As required by the ESA, the wildlife agencies suggested “reasonable and prudent alternatives” (RPAs) that would allow the action to go forward without violating Section 7 (16 U.S.C. § 1536 (B) (3) (A)).

In addition to the jeopardy determinations (generally, applying to species as a whole), both biological opinions found that the proposed action would “take” individual members of the endangered populations in violation of Section 9 of the ESA. By regulation, the “take” of an endangered species includes “an act which actually kills or injures wildlife” and may include “significant habitat modification or degradation where it actually kills or injures wildlife by significantly impairing essential behavioral patterns, including breeding, feeding, or sheltering” (Babbitt v. Sweet Home Chapter of Communities, 515 U.S. 687 (1995)).

The resource agencies, the National Marine Fisheries Service and the Fish and Wildlife Service, issued an “incidental take statement,” in the present case, setting forth reasonable and prudent measures necessary and appropriate to minimize the effect of the proposed action on endangered species. If the action agencies (the Bureau of Reclamation and the California Department of Water

Resources) comply with those measures, including monitoring and reporting requirements, then any “takes” that result from project operations will be deemed “incidental,” and they will be exempt from the prohibitions of Section 9.

STANDARDS FOR THE PREPARATION OF BIOLOGICAL OPINIONS

Under the ESA, the agencies must develop their biological opinions and associated RPAs using the “best scientific and commercial data available” (16 U.S.C. § 1536 (a) (2)). Courts have emphasized the qualifier available, explaining that perfect data are not required. Action can be taken based on imperfect data, so long as the data are the best available. In addition, the above requirement does not remove the agency’s discretion to rely on the reasonable judgments of its own qualified experts, even if others, even a court, might find alternative views more persuasive (see Aluminum Co. v. Bonneville Power Admin., 175 F.3d 1156 (9th Cir. 1999).

Thus, the courts afford the agencies significant deference in determining the best data available for developing the RPAs. Therefore, even if this committee might have relied on different data or come to different conclusions than the agencies did, it does not follow that the RPAs are legally insufficient. Rather, this committee’s conclusions and recommendations should be seen as applying to future work beyond the scope of the agencies’ legal obligations.

Although the economic impact of species protections may be relevant under the ESA, its influence is limited. For example, economic concerns may not be part of the decision whether or not to list species as endangered or threatened, but must be considered when the agencies designate critical habitat (16 U.S.C. § 1533). When developing biological opinions and RPAs, the Ninth Circuit acknowledged that the wildlife agencies may go beyond “apolitical considerations” and that if two proposed RPAs would avoid jeopardy to the relevant species, the agencies “must be permitted to choose the one that best suits all of its interests, including political or business interests.” Southwest Center for Biological Diversity v. U.S. Bureau of Reclamation, 143 F.3d 515 (9th Cir. 1998); See also Bennett v. Spear, 520 U.S. 154 (1997) (asserting that the “best scientific and commercial data” provision is … intended, at least in part, to prevent

uneconomic [because erroneous] jeopardy determinations”). Nevertheless, the lower courts have been reluctant to second-guess agency opinions on the basis of economic arguments (Aluminum Co. cited above).

Effects of the Proposed Action and the Environmental Baseline

In preparing biological opinions, agencies must evaluate the “effects of the [proposed] action” on the species or its critical habitat. Other adverse modifications of the species’ habitats or negative effects on their populations are considered part of the “environmental baseline.” The agencies’ analysis includes consideration of:

STANDARDS FOR THE PREPARATION OF REASONABLE AND PRUDENT ALTERNATIVES (RPAs)

Although RPAs are not binding on the action agency, adherence to the RPAs provides the agency with a safe harbor from claimed violations of the ESA. As the U.S. Supreme Court explained, “the action agency is technically free to disregard the Biological Opinion and proceed with its proposed action, but it does so at its own peril (and that of its employees), for ‘any person’ who knowingly ‘takes’ an endangered or threatened species is subject to substantial civil and criminal penalties, including imprisonment” (Bennett v. Spear, 520 U.S. 154 (1997)).

Under agency regulations, the RPAs must satisfy each of the following four requirements:

Although RPAs must avoid the likelihood of jeopardy, they are not required to promote recovery of the affected species. In other words, no RPA has the responsibility of mitigating all the adverse effects—the “environmental baseline”—that may be causing the decline of a listed species. They must only avoid the likelihood that the proposed action will cause jeopardy.

Next: 3 The Life Histories of the Fishes »
A Scientific Assessment of Alternatives for Reducing Water Management Effects on Threatened and Endangered Fishes in California's Bay-Delta Get This Book
× 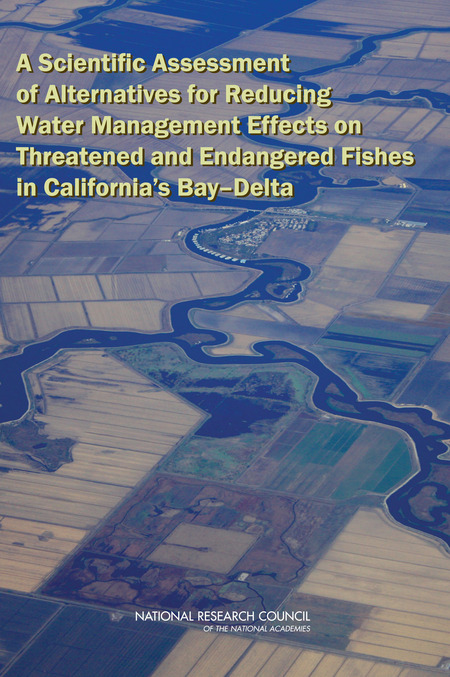 California's Bay-Delta estuary is a biologically diverse estuarine ecosystem that plays a central role in the distribution of California's water from the state's wetter northern regions to its southern, arid, and populous cities and agricultural areas. Recently, the Fish and Wildlife Service and the National Marine Fisheries Service required changes (reasonable and prudent alternatives, or RPAs) in water operations and related actions to avoid jeopardizing the continued existence and potential for recovery of threatened species of fish. Those changes have reduced the amount of water available for other uses, and the tensions that resulted have been exacerbated by recent dry years.

The complexity of the problem of the decline of the listed species and the difficulty of identifying viable solutions have led to disagreements, including concerns that some of the actions in the RPAs might be ineffective and might cause harm and economic disruptions to water users, and that some of the actions specified in the RPAs to help one or more of the listed species might harm others. In addition, some have suggested that the agencies might be able to meet their legal obligation to protect species with less economic disruptions to other water users.

The National Research Council examines the issue in the present volume to conclude that most of the actions proposed by two federal agencies to protect endangered and threatened fish species through water diversions in the California Bay-Delta are "scientifically justified." But less well-supported by scientific analyses is the basis for the specific environmental triggers that would indicate when to reduce the water diversions required by the actions.