Get This Book
Visit NAP.edu/10766 to get more information about this book, to buy it in print, or to download it as a free PDF.
« Previous: 5 Impacts and Future Directions
Page 71 Share Cite
Suggested Citation:"Appendixes." National Research Council. 2010. U.S.-Iran Engagement in Science, Engineering, and Health (2000-2009): Opportunities, Constraints, and Impacts. Washington, DC: The National Academies Press. doi: 10.17226/12921.
×

Next: Appendix A: Conclusions of the Meeting of Academy Leaders (2000) »
U.S.-Iran Engagement in Science, Engineering, and Health (2000-2009): Opportunities, Constraints, and Impacts Get This Book
× 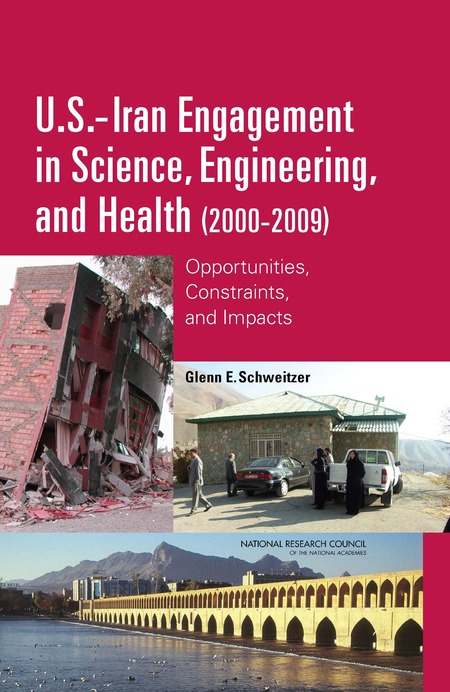 During the first decade of the 21st century, the National Academies, working with a number of partner organizations in Iran, carried out a program of U.S.-Iran engagement in science, engineering, and health (herein referred to as science engagement). This book reviews important aspects of the science engagement program, including: (a) objectives of the program, (b) opportunities and constraints in developing the program, and (c) scientific and political impacts of the activities. Suggestions for future activities that draw on the conclusions and recommendations that have emerged from workshops and other types of interactions are set forth. Of course, the political turmoil within Iran and uncertainties as to the direction of U.S.-Iran government-to-government relations will undoubtedly complicate initiation and implementation of new science engagement activities in the near term. At the same time, many American and Iranian participants and important government officials in the United States and Iran have believed that science engagement can contribute to the evolution of an improved political environment for development of less adversarial relations between the two governments.