Technology for a Quieter America (2010)

Get This Book
Visit NAP.edu/10766 to get more information about this book, to buy it in print, or to download it as a free PDF.
Page i Share Cite
Suggested Citation:"Front Matter." National Academy of Engineering. 2010. Technology for a Quieter America. Washington, DC: The National Academies Press. doi: 10.17226/12928.
×

Technology for a Quieter America

Committee on Technology for a Quieter America

NOTICE: To arrive at the findings and recommendations of this report, the National Academy of Engineering has used a process that involves careful selection of a balanced and knowledgeable committee, assembly of relevant information, and peer review of the resultant report.

Support for this project was provided by a generous gift from NAE member William W. Lang, the National Academy of Engineering Fund, and the Federal Highway Administration. The opinions, findings, conclusions, and recommendations expressed in this publication are those of the author(s) and do not necessarily reflect the views of the supporting organizations.

Copies of this report are available from the

Copyright 2010 by the National Academy of Sciences. All rights reserved.

COMMITTEE ON TECHNOLOGY FOR A QUIETER AMERICA

Noise emissions are an issue in industry, in communities, in buildings, and during leisure activities. As such, the audience for a report on noise control is broad and includes the engineering community; the public; government at the federal, state, and local levels; private industry; labor unions; and nonprofit organizations. These stakeholders should find something of interest in this report.

In the past few decades advances have been made in noise control technology, instruments for noise measurement, and criteria for noise control. These advances need to be recognized in our approach to the control of noise and public policy designed to improve the noise climate in the United States. This, together with increasing worldwide interest in reducing noise, makes it necessary to examine American interests in the production of low-noise products with a view toward remaining competitive. Reducing product noise emissions and achieving noise reductions in our factories, office buildings, classrooms, homes, and the environment are challenging problems.

This study was undertaken by the National Academy of Engineering (NAE) to emphasize the importance of engineering to the quality of life in America, in particular the role of noise control technology making possible a quieter environment. This report was prepared by a study committee and five supporting panels of experts appointed by the NAE and reviewed by an independent panel appointed following NAE procedures. Implementation of the recommendations in the report will result in reduction of the noise levels to which Americans are exposed and will improve the ability of American industry to compete in world markets where increasing attention is being paid to the noise emissions of products.

Key areas where recommendations have been made include cost-benefit analysis of noise reduction, especially related to road traffic noise; improved metrics for noise control; lower limits for noise exposures in industry; “buy quiet” programs; wider use of international standards for noise emissions; airplane noise reduction technology; and noise control in structures such as schools, hospitals, and office buildings. Also recommended is improved cooperation between industry and government agencies involved with noise and, in particular, an expanded role for the Environmental Protection Agency, which can be undertaken under existing law.

Committee on Technology for a Quieter America

This report was reviewed in draft form by individuals chosen for their diverse perspectives and technical expertise, in accordance with procedures approved by the National Academy of Engineering (NAE). The purpose of this independent review is to provide candid and critical comments that will assist the committee and NAE in making its published report as sound as possible and to ensure that the report meets institutional standards for objectivity, evidence, and responsiveness to the study charge. The reviewers’ comments and the draft manuscript remain confidential to protect the integrity of the deliberative process. We wish to thank the following individuals for their reviews of this report:

Although the reviewers listed above provided many constructive comments and suggestions, they were not asked to endorse the conclusions or recommendations and did not see the final draft of the report before its public release. The review of this report was overseen by James L. Flanagan, Retired Vice President for Research, Rutgers, The State University of New Jersey. Appointed by NAE, he was responsible for making certain that an independent examination of this report was carried out in accordance with institutional procedures and that all review comments were carefully considered. Responsibility for the final content of this report rests entirely with the authoring committee and NAE.

In addition to the reviewers, the committee extends its sincerest gratitude to the members of the five expert panels that supported this study (Appendix K), and to the individuals who participated in the project’s eight fact-finding workshops (Appendix L) for sharing their expertise, insights, and best ideas to the study. The committee also wishes to thank the consultants to the committee—Leo L. Beranek, Stephen H. Crandall, Kenneth M. Eldred, and William W. Lang—who provided invaluable advice throughout the project. The committee also thanks the project staff. NAE executive officer Lance Davis and NAE senior editor Carol Arenberg substantially improved the readability of the report. Study director Richard Taber managed the project through January 2009, and NAE program director Proctor Reid managed the project from February 2009 to completion. Vivienne Chin managed the committee’s and panels’ logistical and administrative needs.

Next: Executive Summary »
Technology for a Quieter America Get This Book
× 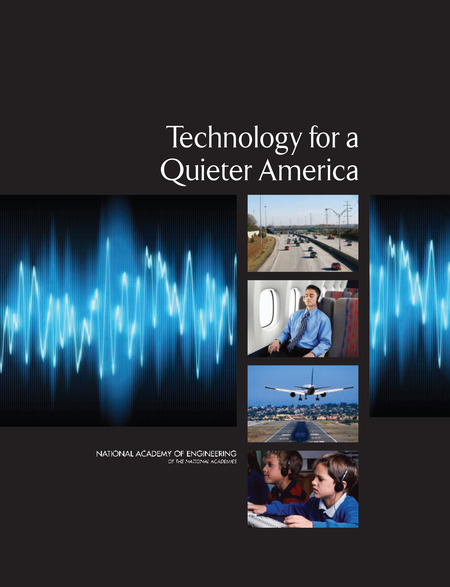 Exposure to noise at home, at work, while traveling, and during leisure activities is a fact of life for all Americans. At times noise can be loud enough to damage hearing, and at lower levels it can disrupt normal living, affect sleep patterns, affect our ability to concentrate at work, interfere with outdoor recreational activities, and, in some cases, interfere with communications and even cause accidents. Clearly, exposure to excessive noise can affect our quality of life.

As the population of the United States and, indeed, the world increases and developing countries become more industrialized, problems of noise are likely to become more pervasive and lower the quality of life for everyone. Efforts to manage noise exposures, to design quieter buildings, products, equipment, and transportation vehicles, and to provide a regulatory environment that facilitates adequate, cost-effective, sustainable noise controls require our immediate attention.

Technology for a Quieter America looks at the most commonly identified sources of noise, how they are characterized, and efforts that have been made to reduce noise emissions and experiences. The book also reviews the standards and regulations that govern noise levels and the federal, state, and local agencies that regulate noise for the benefit, safety, and wellness of society at large. In addition, it presents the cost-benefit trade-offs between efforts to mitigate noise and the improvements they achieve, information sources available to the public on the dimensions of noise problems and their mitigation, and the need to educate professionals who can deal with these issues.

Noise emissions are an issue in industry, in communities, in buildings, and during leisure activities. As such, Technology for a Quieter America will appeal to a wide range of stakeholders: the engineering community; the public; government at the federal, state, and local levels; private industry; labor unions; and nonprofit organizations. Implementation of the recommendations in Technology for a Quieter America will result in reduction of the noise levels to which Americans are exposed and will improve the ability of American industry to compete in world markets paying increasing attention to the noise emissions of products.