Get This Book
Visit NAP.edu/10766 to get more information about this book, to buy it in print, or to download it as a free PDF.
« Previous: D APRN Consensus Model
Page 369 Share Cite
Suggested Citation:"E Undergraduate Nursing Education." Institute of Medicine. 2011. The Future of Nursing: Leading Change, Advancing Health. Washington, DC: The National Academies Press. doi: 10.17226/12956.
×

According to the findings of the 2008 National Sample Survey of registered nurses (RNs), just over 3 million licensed RNs live in the United States; nearly 85 percent of these women and men are actively working in the nursing profession. Nearly 450,000 RNs are estimated to have received their first U.S. license between 2004 and 2008 (HRSA, 2010). The current nursing workforce includes a high proportion of nurses working in the later years of their careers, soon to retire, and a high proportion of nurses at the onset of their careers. Midcareer nurses, the group most needed to fill the roles of those leaving the workforce, are the lowest in number. Therefore, the knowledge, experience, and mentoring that senior nurses can provide could potentially be lost (Bleich et al., 2009). Table E-1 shows the demographic and educational distribution of the current nursing workforce.

Nursing is unique among the health care professions in the United States in that it offers multiple educational pathways leading to an entry-level license to practice. For the past four decades, nursing students have been able to pursue three different educational paths: the diploma in nursing, the associate’s degree in nursing (ADN), and the bachelor’s of science in nursing (BSN). More recently, an accelerated, second-degree bachelor’s program for students who possess a baccalaureate degree in another field has become a popular option.

For many years, the most common choice of nursing students was the diploma program at a hospital-based school. Generally lasting 3 years and providing limited liberal arts content, diploma programs trace their origin to the work of Florence Nightingale and her colleagues in the 19th century. In many ways,

diploma programs are similar to apprenticeship programs for physicians in the 1800s before the widespread development of medical schools (Gebbie, 2009). As nursing gained a stronger theoretical foundation and other types of nursing programs increased in number, the number of diploma programs declined remarkably throughout the 20th century except in a few states, such as New Jersey, Ohio, and Pennsylvania. One advantage of the diploma program is that there are guaranteed clinical spaces for those accepted into the program, something ADN and BSN programs cannot offer. The number of all working nurses who began their nursing education in diploma schools fell from 63.7 percent in 1980 to 20.4 percent in 2008; the number of new diploma graduates dropped to 3.1 percent of all graduates in the 2005–2008 graduation cohort (HRSA, 2010).

At present, the most common way to become an RN is to pursue an ADN at a community college. The proportion of nurses in the United States whose initial education was an ADN increased from 42.9 percent in 2004 to 45.4 percent in 2008 (HRSA, 2010). ADN programs in nursing were launched in the mid–20th century in response to the nursing shortage that followed World War II (Lynaugh, 2008; Lynaugh and Brush, 1996). Generally speaking, the ADN remains less

expensive than a BSN because of the cost structure of the community college system and the shorter program duration. Once conceived as a 2-year program, the ADN is seen as taking less time than a BSN, but this situation has changed over the years (Orsolini-Hain, 2008). In most non–health care disciplines, the associate’s degree takes 2 years to complete. In nursing, however, surveys have found that it takes students 3–4 years to complete an ADN program because of the need to fulfill prerequisites and the lack of adequate faculty, which lead to long waiting lists for many programs and classes (Orsolini-Hain, 2008). The ADN curriculum often combines intense science and clinical coursework into a condensed time frame, posing additional challenges to completing the program in 2 years.

BACHELOR’S OF SCIENCE IN NURSING

The BSN is a 4-year degree, typically offered at a university; the first university-based schools of nursing were founded in the early 20th century (Lynaugh, 2008; Lynaugh and Brush, 1996). BSN programs emphasize liberal arts, advanced sciences, and nursing coursework across a wide range of settings, along with leadership development and exposure to community and public health competencies. As of 2008, 34.2 percent of RNs throughout the United States had started with a BSN, up from 31.5 percent in 2004 (HRSA, 2010). Beginning in the latter part of the 20th century, an accelerated option for a BSN or MSN became available to applicants who had already completed a bachelor’s degree in a different field. Also known as fast-track or second-degree programs, these programs have added substantially to the growing number of baccalaureate graduates (AACN, 2010).

Most BSN students complete their degrees in 4 years. Accelerated programs that offer the BSN to students who have already completed a bachelor’s degree are typically completed in 11–18 months, with intense coursework and professional formation accelerated based on previous collegiate and life experience (AACN, 2010).

For much of the 20th century, following the release of a significant 1965 position paper of the American Nurses Association, nursing leaders and educators tried to standardize nursing education and make the BSN the minimum entry-level requirement for nursing practice. Four states were targeted for early implementation (Smith, 2010). Only one of them—North Dakota—fully followed through on that recommendation by establishing the BSN as the minimum degree in nursing in 1987 (Smith, 2010). In 2003, however, the state legislature, at the urging of hospitals and long-term-care stakeholders, passed a law that allowed nurses with an ADN to practice (Boldt, 2003). Nationwide, market forces and the needs of individual employers generally determine whether a BSN is required for entry into practice.

In addition to the RNs, who receive a diploma, associate, or baccalaureate degree in nursing, another undergraduate-level degree offered is the licensed practical/vocational degree in nursing. Licensed practical/vocational nurses (LPNs/LVNs) are especially important because of their contributions to care in long-term care facilities and nursing homes.

Historically, LPN/LVN programs have fluctuated based on need. The first training program for licensed practical/vocational nurses (LPNs/LVNs) dates back to the late 19th century. These programs increased in number following the nursing shortage of World War I, and the passage of the Smith Hughes Act, and again following the nursing shortage of World War II, when LPNs/LVNs were in demand to assist RNs in civilian hospitals (lpntraining.org, 2010), which were short-staffed as a result of war efforts. LPNs/LVNs also found employment in long-term-care facilities and nursing homes.

LPN/LVN receives a diploma after completion of a 12-month program. The LPN/LVN is not educated for independent decision making for complex care but obtains basic training in anatomy and physiology, nutrition, and nursing techniques. With additional study, these nurses can perform supplemental nursing tasks that are useful to patients and nursing home residents and can contribute to clinical documentation and team performance. Some LPNs/LVNs also supervise nursing attendants and direct care workers in long-term care settings.

The fact that each educational pathway (i.e., diploma, ADN, and BSN) leads to the same licensure exam (the NCLEX-RN; see Chapter 4) makes it difficult to argue that a graduate with a BSN is more competent to perform entry-level tasks than one who has a diploma or an ADN. Statistics from the National Council of State Boards of Nursing show little difference in the pass rates of BSN, ADN, and diploma graduates, which is to be expected because the exam tests the minimum standards for safe practice. In 2009, 89.49 percent of 52,241 BSN candidates passed the NCLEX-RN exam, compared with 87.61 percent of 78,665 ADN candidates and 90.75 percent of 3,677 diploma candidates (NCSBN, 2010).

Orsolini-Hain, L. 2008. An interpretive phenomenological study on the influences on associate degree prepared nurses to return to school to earn a higher degree in nursing, Department of Nursing, University of California, San Francisco.

Smith, T. G. 2010. A policy perspective on the entry into practice issue. OJIN: The Online Journal of Issues in Nursing 15(1).

Next: F Health Care System Reform and the Nursing Workforce: Matching Nursing Practice and Skills to Future Needs, Not Past Demands »
The Future of Nursing: Leading Change, Advancing Health Get This Book
× 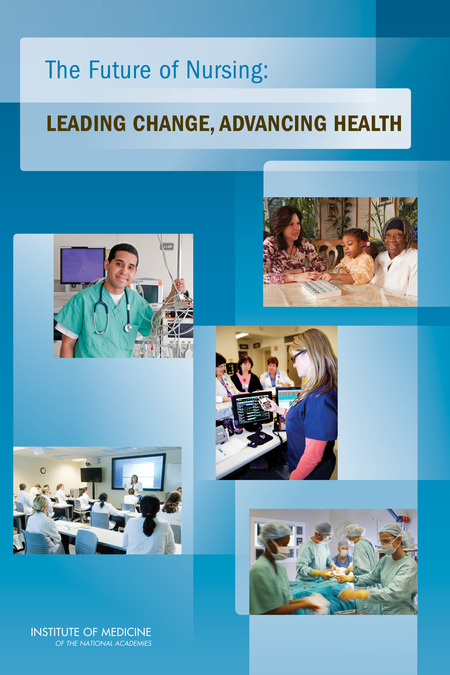 The Future of Nursing explores how nurses' roles, responsibilities, and education should change significantly to meet the increased demand for care that will be created by health care reform and to advance improvements in America's increasingly complex health system.

At more than 3 million in number, nurses make up the single largest segment of the health care work force. They also spend the greatest amount of time in delivering patient care as a profession. Nurses therefore have valuable insights and unique abilities to contribute as partners with other health care professionals in improving the quality and safety of care as envisioned in the Affordable Care Act (ACA) enacted this year.

Nurses should be fully engaged with other health professionals and assume leadership roles in redesigning care in the United States. To ensure its members are well-prepared, the profession should institute residency training for nurses, increase the percentage of nurses who attain a bachelor's degree to 80 percent by 2020, and double the number who pursue doctorates. Furthermore, regulatory and institutional obstacles -- including limits on nurses' scope of practice -- should be removed so that the health system can reap the full benefit of nurses' training, skills, and knowledge in patient care.

In this book, the Institute of Medicine makes recommendations for an action-oriented blueprint for the future of nursing.