Get This Book
Visit NAP.edu/10766 to get more information about this book, to buy it in print, or to download it as a free PDF.
« Previous: 4 Gaps, Needs, and Potential Remedies
Page 107 Share Cite
Suggested Citation:"Appendix A: Committee Member Biographies." National Research Council. 2011. Challenges and Opportunities for Education About Dual Use Issues in the Life Sciences. Washington, DC: The National Academies Press. doi: 10.17226/12958.
×

Vicki Chandler (NAS), Chair, is on leave from the University of Arizona where she holds the Carl E. and Patricia Weiler Endowed Chair for Excellence in Agriculture and Life Sciences and is a Regents’ Professor in the Department of Plant Sciences and Molecular & Cellular Biology. She received her B.S. from the University of California, Berkeley and her Ph.D. from the University of California, San Francisco. Her research program investigates the regulation of gene expression with an emphasis on gene silencing in plants. Dr. Chandler received the College of Agriculture and Life Sciences Faculty Researchers of the Year Award in 2001 and was elected to the National Academy of Sciences in 2002. Currently Dr. Chandler is the Chief Program Officer for Science at the Gordon and Betty Moore Foundation in Palo Alto, California.

Jennifer Gaudioso is a Principal Member of the Technical Staff in the International Biological Threat Reduction Program at Sandia National Laboratories (SNL). Her work focuses on the responsible use of biological agents, equipment, and expertise at bioscience facilities, with an emphasis on risk assessment. Dr. Gaudioso has worked extensively on laboratory biorisk management issues internationally. She has consulted on these topics for basic and high containment bioscience laboratories in over thirty countries. In recent years, she has organized many international conferences, trainings, and workshops. Dr. Gaudioso led the design of SNL’s training laboratory and associated course, Controlling Laboratory Biorisks. She has also participated in assessments at US government bio-

science facilities, and contributed to the development of international biosecurity guidelines. She is author of numerous journal articles and has presented her research at national and international meetings. She also coauthored the Laboratory Biosecurity Handbook, published by CRC Press. Dr. Gaudioso serves on SNL’s Institutional Biosafety Committee, and is an active member of the American Biological Safety Association. She earned her Ph.D. at Cornell University.

Andrzej Górski is Professor of Medicine and Immunology at The Medical University of Warsaw and Vice President of the Polish Academy of Sciences. He is Board certified in Internal Medicine with a subspecialty certification in clinical immunology. Dr. Górski received his M.D. (1970) and Ph.D. (1973) degrees from The Medical University of Warsaw and was a Fulbright Scholar at the Sloan-Kettering Institute for Cancer Research, USA. He has been a visiting professor at Adelaide Children’s Hospital, Australia, the Weizmann Institute of Science, Israel, the University of London United Medical and Dental Schools of Guy’s and St. Thomas’s Hospitals, England, and the Universidad Autonoma, Madrid, Spain. Dr. Górski served as Prorector for Scientific Affairs & International Cooperation (1993-1996) and as Rector (1996-1999) of The Medical University of Warsaw. From 1999-2007 he was also Director of the L. Hirszfeld Institute of Immunology and Experimental Therapy at the Polish Academy of Sciences. Dr. Górski has authored over one hundred scientific publications, serves as the editor in chief of Archivum Immunologiae et Therapiae Experimentalis, and has served as a member of the Editorial Board of Science & Engineering Ethics. His awards include the Meller Award for excellence in cancer research from Sloan-Kettering Institute, the ICRETT Award and the Yamagiwa-Yoshida Award from the International Union Against Cancer, the J. Sniadecki Memorial Award from the Polish Academy of Sciences (the highest award in medical sciences in Poland), and the Gloria Medicinae, awarded by The Polish Medical Association. In addition, Dr. Górski is a member of the Committee for Ethics in Science at the Polish Academy of Sciences, a member of the Committee for Ethics in Science at the Ministry of Science, Head of the Bioethics Committee, Ministry of Health, and represents Poland in the Forum of National Ethics Committees to the European Commission.

Alastair Hay is Professor of Environmental Toxicology at the University of Leeds. He has worked on issues relating to chemical and biological warfare (CBW) for some 30 years. Much of his work has dealt with the need for workable international treaties which outlaw the use of CBW. Professor Hay has been involved in field expeditions in Iraq and Bosnia to investigate the use of chemical warfare agents. He has written exten-

sively on the subject and helped prepare the World Health Organization’s 2004 manual “Public health response to biological and chemical agents.” Professor Hay chaired a small international working group on behalf of the International Union of Pure and Applied Chemistry and the Organization for the Prohibition of Chemical weapons which prepared educational material for chemists on multiple uses of chemicals, chemical warfare agents and codes of conduct.

Michael Imperiale is a Professor in the Department of Microbiology and Immunology at the University of Michigan Medical School. He joined the department in 1984 as the Arthur F. Thurnau Assistant Professor of Microbiology and Immunology and was subsequently promoted to Associate Professor in 1990 and Professor in 1996. Before joining the University of Michigan, Dr. Imperiale carried out research training as a postdoctoral fellow at The Rockefeller University, where he first became interested in DNA tumor viruses, studying gene regulation in the human pathogen, adenovirus. He received his undergraduate and graduate training at Columbia University, receiving a B.A. in 1976, M.A. in 1978, and Ph.D. in 1981, all in biological sciences. Currently, Dr. Imperiale’s research interests focus on the study of how DNA tumor viruses interact with the host immune system, how they contribute to oncogenesis, how they traffic within the cell, and how they assemble. Dr. Imperiale is a member of the National Science Advisory Board for Biosecurity, a position he has held since 2005. He also serves as an editor of the Journal of Virology.

Gabriel Ogunmola is Chairman of the International Council for Science Regional Committee for Africa and the executive director of the Science and Technology Development Foundation in Ibadan, Nigeria. His research interests include biophysical chemistry; structure function relationships in macromolecules, protein and DNA, chemistry, molecular pathology of hemoglobins and enzymenopathies. He is also a member of the Network of African Science Academies and president of the Nigerian Academy of Sciences. Dr. Ogunmola attended Princeton University as a Fulbright Scholar and holds a Ph.D.

Sergio Jorge Pastrana is Foreign Secretary of the Cuban Academy of Sciences. Sergio Jorge Pastrana was born in Havana, Cuba, in 1950. He graduated from the School of Letters and Arts of the University of Havana in History of English Literature and Culture in 1975, and he has done postgraduate studies at the Institute of International Relations of the Ministry of Foreign Relations of Cuba. His interests on international cooperation relate to the history of early international contacts of the Cuban scientific community, and its influence on the building of a national scientific capac-

ity in Cuba, a subject on which he has published and lectured both in Cuba and abroad. Pastrana has been a member of the Caribbean Academy of Sciences since 2000, and he is also a member of the Board of the Caribbean Scientific Union, an organization of all academies of sciences of the Wider Caribbean Basin. He is a representative of the Cuban Academy to the Executive Council of the Inter Academy Panel on International Issues since 2003, where he has been directly involved in the groups coordinating initiatives on Biosecurity and Genetically Modified Organisms, and presently chairs the Membership Committee.

Susan Singer is Laurence McKinley Gould Professor of the Natural Sciences in the Department of Biology at Carleton College, where she has been since 1986. From 2000 to 2003 she directed the Perlman Center for Learning and Teaching, then took a research leave supported by a Mellon new directions fellowship. She chaired the Biology Department from 1995 to 1998 and was a National Science Foundation program officer for developmental mechanisms from 1999 to 2001. In her research, she investigates the evolution, genetics, and development of flowering in legumes; many of her undergraduate students participate in this research. She is actively engaged in efforts to improve undergraduate science education and received the Excellence in Teaching award from the American Society of Plant Biology in 2004. She helped to develop and teaches in Carleton’s Triad Program, a first-term experience that brings students together to explore a thematic question across disciplinary boundaries. She is a member of the Project Kaleidoscope Leadership Initiative national steering committee and has organized PKAL summer institutes and workshops. At the National Research Council, she was a member of the Committee on Undergraduate Science Education and the Steering Committee on Criteria and Benchmarks for Increased Learning from Undergraduate STEM Instruction and chaired the Committee on High School Science Laboratories: Role and Vision; currently she serves on the Board on Science Education and is a science consultant to the NRC Science Learning Kindergarten to Eighth Grade study. She has B.S., M.S., and Ph.D. degrees, all from Rensselaer Polytechnic Institute.

Geoffrey Smith is a British virologist and medical research authority in the area of vaccinia virus and the family of poxviruses. He is Head of the Department of Virology at Imperial College London. Smith completed his bachelor’s degree at the University of Leeds in 1977 and in 1981 gained a Ph.D. in Virology while in London. Between 1981 and 1984, while he was working in the United States under the National Institutes of Health, Smith developed and pioneered the use of genetically engineered live vaccines. Between 1985 and 1989 he lectured at the University of Cambridge.

Prior to 2002, he was based at the Sir William Dunn School of Pathology at the University of Oxford. Between 1988 and 1992 his work was funded by the Jenner Fellowship from The Lister Institute; he became a governor of the Institute in 2003. In 1992 the Society for General Microbiology awarded Smith their Fleming Award for outstanding work by a young microbiologist. In 2002, Smith was elected as a fellow of the Academy of Medical Sciences. In 2003, he was invited to become a fellow of the Royal Society and in 2005 was awarded the Feldburg Foundation Prize for his work on poxviruses. Smith was editor in chief of the Journal of General Virology up until 2008 and chairs the WHO’s Advisory Committee on Variola Virus Research. As of 2009 he remains the Head of the Department of Virology at Imperial College London and is president-elect of the International Union of Microbiological Societies.

Next: Appendix B: List of Workshop Participants and Agenda »
Challenges and Opportunities for Education About Dual Use Issues in the Life Sciences Get This Book
× 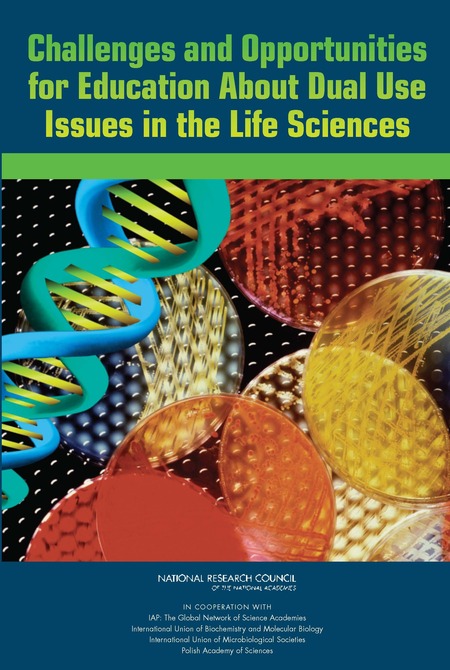 The Challenges and Opportunities for Education About Dual Use Issues in the Life Sciences workshop was held to engage the life sciences community on the particular security issues related to research with dual use potential. More than 60 participants from almost 30 countries took part and included practicing life scientists, bioethics and biosecurity practitioners, and experts in the design of educational programs.

The workshop sought to identify a baseline about (1) the extent to which dual use issues are currently being included in postsecondary education (undergraduate and postgraduate) in the life sciences; (2) in what contexts that education is occurring (e.g., in formal coursework, informal settings, as stand-alone subjects or part of more general training, and in what fields); and (3) what online educational materials addressing research in the life sciences with dual use potential already exist.