Understanding the Demand for Illegal Drugs (2010)

Get This Book
Visit NAP.edu/10766 to get more information about this book, to buy it in print, or to download it as a free PDF.
« Previous: Front Matter
Page 1 Share Cite
Suggested Citation:"Summary." National Research Council. 2010. Understanding the Demand for Illegal Drugs. Washington, DC: The National Academies Press. doi: 10.17226/12976.
×

A great deal has been done to try to reduce drug consumption in the United States over the past 35 years, but drugs are just as cheap and available as they have ever been. Cocaine, heroin, and methamphetamines continue to cause great harm in the country, particularly in minority communities in the major cities. Marijuana use remains a part of adolescent development for about half of the country’s young people, although there is controversy about the extent of its harm.

In light of the continued problems with illegal drug use, the National Institute of Justice asked the National Research Council (NRC) to undertake a study of current research on the demand for drugs. The statement of task for this project is as follows:

An ad hoc committee will conduct a workshop-based study that will identify and describe what is known about the nature and scope of markets for illegal drugs and the characteristics of drug users. The study will include exploration of research issues associated with drug demand and what is needed to learn more about what drives demand in the United States. The committee will specifically address the following issues:

different types of users; the dynamics associated with the apparent failure of policy interventions to delay or inhibit the onset of illegal drug use for a large proportion of the population; and the effects of enforcement on demand reduction.

Drawing on commissioned papers and presentations and discussions at a public workshop that it will plan and hold, the committee will prepare a report on the nature and operations of the illegal drug market in the United States and the research issues identified as having potential for informing policies to reduce the demand for illegal drugs.

This charge was extremely broad. It could have included literature reviews on such topics as characteristics of substance users, etiology of initiation of use, etiology of dependence, drug use prevention programs, and drug treatments. Two considerations led to narrowing the focus of our work. The first was substantive. Each of the topics just noted involves very large fields of well-developed research, and each has been reviewed elsewhere. Moreover, each of those areas of inquiry is currently expanding as a result of new research initiatives (such as the National Epidemiologic Survey on Alcohol and Related Conditions and the Community Epidemiology Work Group of the National Institute on Drug Abuse) and new technologies (e.g., neuroimaging, genetics). The second consideration was practical: given the available resources, we could not undertake a complete review of the entire field.

Thus, this report focuses tightly on demand models in the field of economics and on evaluating the data needs for advancing this relatively undeveloped area of investigation. Although this area has a relatively shorter history of accumulated findings than the more clinical, biological, and epidemiological areas of drug research, it is arguably better situated to inform government policy at the national level. A report on economic models and supporting data seemed to us more timely than a report on drug consumers and drug interventions.

The committee drew on economic models and their supporting data, as well as related research, as one part of the evidentiary base for this report. In addition, the committee’s workshop provided the context for and contributed to the content of this report.

The committee was not able to fully address task 2 in our statement of work because research in that area is not strong enough to give an accurate description of consumers across different markets nor to address the question of why markets remain robust despite the risks associated with buying and selling drugs. The discussion at the workshop underscored the point that the available ethnographic research and the limited longitudinal research on drug-seeking behavior are not strong enough to inform those questions.

The study is intended to complement the 2001 NRC volume, Informing America’s Policy on Illegal Drugs: What We Don’t Know Keeps Hurting Us (Washington, DC, National Academy Press), by giving more attention specifically to the sources of demand and assessing the potential of treatment to make a substantial difference in the use of illegal drugs.

The measured effectiveness of programs at the population level is discouraging, while the evidence on treatment is encouraging. However, there are difficulties inherent in measuring individual illegal drug use—a covert behavior that occurs outside the framework of legal markets. The problem is further complicated by the heterogeneity of drug use: there are major differences between a large number of occasional users who do not satisfy formal diagnostic criteria for abuse or dependence and smaller groups of regular and frequent users of heroin, cocaine, and amphetamine who meet dependence criteria.

The data on prevalence, which come from nationally representative population and treatment surveys (covering, respectively, the noninstitutionalized and treatment populations), are of limited value in understanding the full extent of drug use. Because of limitations in both their sampling frames and the high nonresponse rates, they fail to capture information about the respective roles of heavy use and recreational use in drug markets, the dynamics associated with the apparent failure of policy interventions to delay or inhibit the onset of illegal drug use for a large proportion of the population, and the effects of enforcement on demand reduction.

The largest of the population surveys, the National Survey of Drug Use and Health (NSDUH) of the U.S. Department of Health and Human Services (HHS), has implemented several methodological improvements over its predecessor, the National Household Survey of Drug Abuse, to increase response rates and improve data quality, but it continues to miss a large fraction of those with the most serious drug abuse problems.

Increasingly, new methodologies are being used to reach and survey hidden populations. Yet there has been little research on the strengths, weaknesses, and best practices of the methodologies. There are important questions about the impact of respondent incentive payments on research participation that would be valuable. Also missing in current work is attention to explicitly coordinating the NSDUH with other high-quality datasets in areas important to substance abuse.

Monitoring the Future (MTF), the long-term and ongoing study of the behaviors, attitudes, and values of U.S. secondary school students, college students, and young adults, supported by the National Institute on Drug Abuse, continues to collect potentially valuable longitudinal data each year. The committee endorses the recommendation of a previous NRC committee for the National Institute on Drug Abuse to find ways to provide wider research access to the MTF data.

There have been major losses of indicator systems in recent years, especially the Arrestee Drug Abuse and Monitoring (ADAM) system of the U.S. Department of Justice, which studied criminally active drug offenders and was ended in 2003. ADAM was restarted by the Office of National Drug Control Policy, but only in 10 cities. It is less important for the data it provides on the levels of drug use among arrestees than it is as a platform for studying the behavior of the population that may account for a very large proportion of cocaine, heroin, and methamphetamine used in the United States. It appears impossible to develop estimates of the quantities used and expenditures on illegal drugs without data from these populations.

HHS’s Treatment Episode Data System (TEDS), originally developed as an administrative dataset, has become an increasingly valuable research tool in understanding changing patterns of illegal drug use. It provides a large-sample dataset on the circumstances of individuals entering substance abuse treatment. The recent addition of a discharge dataset to supplement the admissions dataset may provide an important new source of information for understanding drug use.

TEDS might be made more valuable through the inclusion of individual identifiers, including specific sociodemographic identifiers, or by

adding supplementary surveys conducted on a subsample of clients. Such additions would provide a richer body of information on the characteristics of noncriminal drug users. In addition, better principles and procedures for epidemiological surveillance about emerging forms of substance abuse and emerging patterns of drug-related harms to human health are needed.

To increase the data available and strengthen the research base for understanding illegal drug use, the committee offers recommendations on the following topics:

The United States has developed strong data systems that shed light on illegal drug markets, but they are incomplete. Given the tens of billions of dollars spent annually to address the social harms associated with illegal drug use, policy makers and the public stand to gain significantly with improved data systems and research that will allow them to assess the value of those expenditures. Better data and research offer the potential to uncover new opportunities to halt or prevent illegal drug use or to render such drug use less harmful to the nation.

Next: 1 Introduction »
Understanding the Demand for Illegal Drugs Get This Book
× 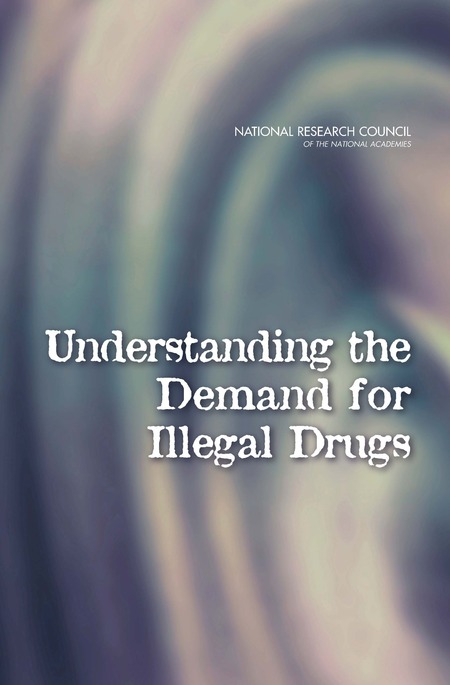 Despite efforts to reduce drug consumption in the United States over the past 35 years, drugs are just as cheap and available as they have ever been. Cocaine, heroin, and methamphetamines continue to cause great harm in the country, particularly in minority communities in the major cities. Marijuana use remains a part of adolescent development for about half of the country's young people, although there is controversy about the extent of its harm.

Given the persistence of drug demand in the face of lengthy and expensive efforts to control the markets, the National Institute of Justice asked the National Research Council to undertake a study of current research on the demand for drugs in order to help better focus national efforts to reduce that demand.

This study complements the 2003 book, Informing America's Policy on Illegal Drugs by giving more attention to the sources of demand and assessing the potential of demand-side interventions to make a substantial difference to the nation's drug problems. Understanding the Demand for Illegal Drugs therefore focuses tightly on demand models in the field of economics and evaluates the data needs for advancing this relatively undeveloped area of investigation.