The Future of Computing Performance: Game Over or Next Level? (2011)

Chapter:Appendix A: A History of Computer Performance

Get This Book
Visit NAP.edu/10766 to get more information about this book, to buy it in print, or to download it as a free PDF.
« Previous: Appendixes
Page 155 Share Cite
Suggested Citation:"Appendix A: A History of Computer Performance." National Research Council. 2011. The Future of Computing Performance: Game Over or Next Level?. Washington, DC: The National Academies Press. doi: 10.17226/12980.
×


A History of Computer Performance

Better computer performance matters in two ways. First, in what is often called capability computing, it can enable computations that were previously not practical or worthwhile. It does no good to compute tomorrow’s weather forecast in 24 hours, but 12-hour computation is valuable. Second, when performance scales up more rapidly than computer cost—as has often been the case—better cost performance allows computation to be used where it was previously not economically tenable. Neither spreadsheets on $1,000,000 mainframes nor $10,000 MP3 players make sense.

Two popular benchmark suites are SPECint2000 and SPECfp2000. Both are produced by the Standard Performance Evaluation Corporation (SPEC) (http://www.spec.org/). SPECint2000 includes 12 integer codes, and SPECfp200 has 14 floating-point benchmarks. Below, we use SPEC data to examine computer-performance trends over the last 2 decades. The results are valuable, but their absolute numbers should be regarded as rough approximations of systems’ absolute performance. Nevertheless, they are much better than results based on “peak rate,” which gives a computer’s speed when it is doing nothing.

The Figures A.1 and A.2 reveal two trends. First, computer performance has improved exponentially (linearly on a semilogarithmic plot) for most years under study. In particular, until 2004 or so, both SPECint2000 and SPECfp2000 improved at a compound annual rate exceeding 50% (for example, a factor of 100 in about 10 years).

Second, the performance improvements after 2004 have been poorer. 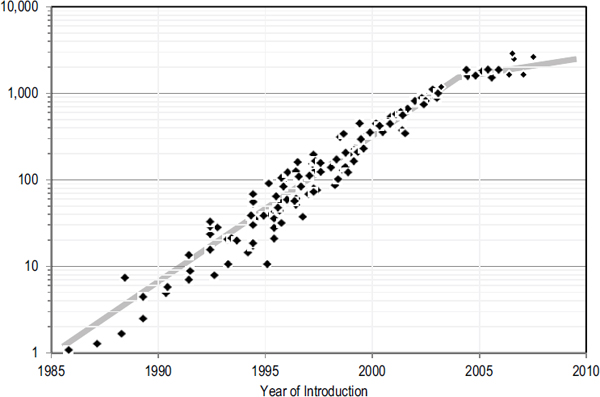 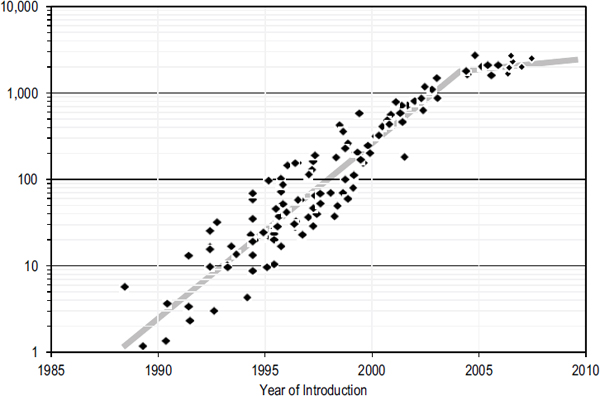 One could hope that the results are an anomaly and that computer vendors will soon return to robust annual improvements. However, public roadmaps and private conversations with vendors reveal that singlethreaded computer-performance gains have entered a new era of modest improvement.

Trends in computer-clock frequency offer another reason for pessimism. Clock frequency is the “heart rate” of a computer, and its improvement has traditionally been a major component of computer-performance improvement. Figure A.3 (FREQ) illustrates clock frequency over time in megahertz (millions of cycles per second). Clearly, clock-frequency improvements have also stalled (especially if the 4.7-GHz power 6 is more an exception than the new rule).

Moreover, the principal reason that clock-frequency improvement has slowed greatly is that higher clock frequencies demand greater power and the power used by modern microprocessors has reached a level that make increases questionable from an economic perspective and may even encourage clock-frequency reductions. Figure A.4 (POWER) plots chip power (in watts) versus. year. Like clock frequencies, power consumed by a chip increased exponentially (linearly on a semilogarithmic plot) for years, but it has recently reached a plateau. 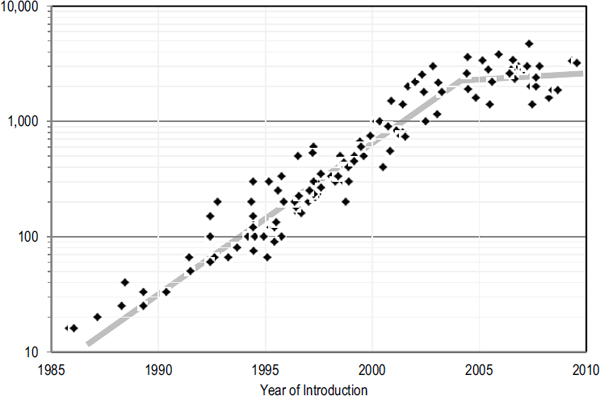 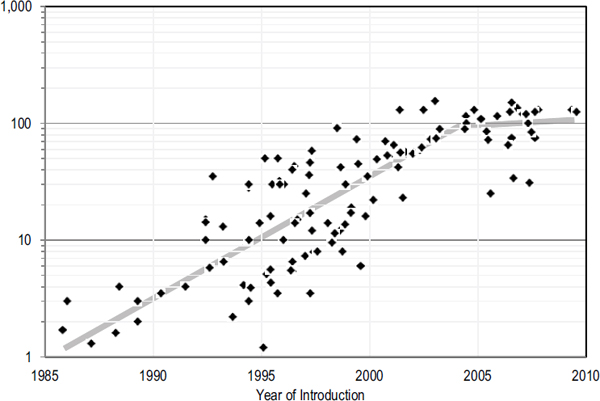 What will the rest of the 21st century bring? Optimists predict that Kurzweil’s trend will continue. Pessimists worry that single-threaded architectures and complementary metal oxide semiconductor technology are reaching their limits, that multithreaded programming has not been broadly successful, and that alternative technologies are still insufficient. Our job, as encouraged in the rest of this report, is to prove the optimists correct.

1The Law of Accelerating Returns, by Ray Kurzweil, http://www.kurzweilai.net/articles/art0134.html?printable=1.

Next: Appendix B: Biographies of Committee Members and Staff »
The Future of Computing Performance: Game Over or Next Level? Get This Book
× 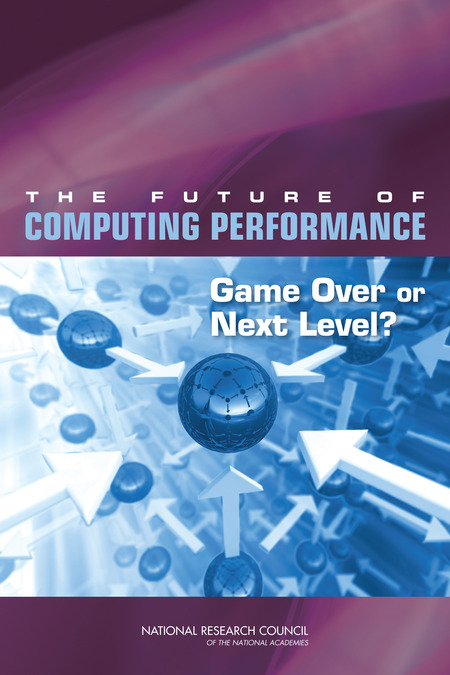 The end of dramatic exponential growth in single-processor performance marks the end of the dominance of the single microprocessor in computing. The era of sequential computing must give way to a new era in which parallelism is at the forefront. Although important scientific and engineering challenges lie ahead, this is an opportune time for innovation in programming systems and computing architectures. We have already begun to see diversity in computer designs to optimize for such considerations as power and throughput. The next generation of discoveries is likely to require advances at both the hardware and software levels of computing systems.

There is no guarantee that we can make parallel computing as common and easy to use as yesterday's sequential single-processor computer systems, but unless we aggressively pursue efforts suggested by the recommendations in this book, it will be "game over" for growth in computing performance. If parallel programming and related software efforts fail to become widespread, the development of exciting new applications that drive the computer industry will stall; if such innovation stalls, many other parts of the economy will follow suit.

The Future of Computing Performance describes the factors that have led to the future limitations on growth for single processors that are based on complementary metal oxide semiconductor (CMOS) technology. It explores challenges inherent in parallel computing and architecture, including ever-increasing power consumption and the escalated requirements for heat dissipation. The book delineates a research, practice, and education agenda to help overcome these challenges. The Future of Computing Performance will guide researchers, manufacturers, and information technology professionals in the right direction for sustainable growth in computer performance, so that we may all enjoy the next level of benefits to society.