An Assessment of the National Institute of Standards and Technology Center for Neutron Research: Fiscal Year 2010 (2010)

Get This Book
Visit NAP.edu/10766 to get more information about this book, to buy it in print, or to download it as a free PDF.
« Previous: 3 Science and Technology at the Center
Page 14 Share Cite
Suggested Citation:"4 Facilities and Resources." National Research Council. 2010. An Assessment of the National Institute of Standards and Technology Center for Neutron Research: Fiscal Year 2010. Washington, DC: The National Academies Press. doi: 10.17226/13012.
×

The NIST Center for Neutron Research continues to operate its facilities effectively in the service of the research community. The Reactor Operations and Engineering Group has achieved an exemplary performance reliability factor of greater than 98 percent on days scheduled for operation. The NCNR’s number of instrument operating days (3,741) in 2009 led the neutron facilities in the United States by a wide margin while supporting the research of more than 2,250 NCNR participants.

The NCNR is to be congratulated for receiving a new operating license from the Nuclear Regulatory Commission. There were no reportable occurrences in 2009. Continued diligence to ensure safe, reliable operations is essential to supporting the research community. Updating the NCNR Final Safety Analysis Report annually is a commendable best practice. Regular external safety assessments by the NCNR Safety Assessment Committee (SAC) are important, and the NCNR should carefully consider SAC recommendations.

At the NCNR, total staffing is 209 (not including about 50 staff from Physics, Chemistry, and Health Physics), broken down among three groups—in Reactor Operations and Engineering there are 46 staff members; in Research Facility Operations, 54; and in Neutron Condensed Matter Science, 85—and the NCNR Center Office, which has 24 staff members. Additional postdoctoral appointments were made over the past year, allowing the science group staffing to grow from 79 to 85. The reactor now has a full complement of 20 operators, whose presence and services will be required even during the shutdown. In contrast to earlier years, operations and facilities staffing levels are viewed by management as being satisfactory and also well aligned with the needs of the Expansion Project. Three new instrument scientists and 6 mechanical engineers have been hired in the past year. To oversee the work during the expansion, a project management office has been established with 2 new hires who have expertise in civil construction and instrument development. The Expansion Project schedule is very intense and can be expected to take all the time of the operations and facilities staff during the shutdown period. The year’s delay referred to above will provide additional time for a well-coordinated effort during the aforementioned shutdown. The management is encouraged to maintain scientific productivity during the shutdown by not calling more than necessary on the science staff, particularly the postdoctoral members and earlier-career personnel.

The total NCNR budget for FY 2009 was $42.7 million, and the budget for FY 2010 is estimated to be $39.8 million. The NCNR budget appears to be adequate. The NCNR is aggressively taking advantage of funding from the American Recovery and Reinvestment Act of 2009 (ARRA; Public Law 111-5) and the America COMPETES Act of 20075 to upgrade its infrastructure and improve the scientific capabilities of its instruments. These changes should resolve two areas of concern for facility maintenance: repairing the thermal shield and replacing the safety shim arms. The new instruments

should expand the cold neutron measurement capacity of the NCNR by 30 percent while significantly advancing the research potential of the facility.

The long shutdown for the Expansion Project beginning in April 2011 must be planned for very carefully. Several separate installations must be staged during this shutdown. The delay caused by the procurement of the Secondary Cooling Pump Building is an example of what can go wrong in a complex project. There is a significant opportunity cost to having a major research facility suspend operations for an extended period. It is important to the user community that something unexpected does not prolong the shutdown beyond what is scheduled, and the NCNR staff should make every effort to minimize this possibility. The strategy of having all procured equipment in hand prior to beginning the shutdown seems prudent. It is important to keep the user community informed of the status of the Expansion Project as the plans evolve. Information flow has been limited.

The future availability of 3He is uncertain. This issue is not unique to the NCNR; it is a concern of the whole neutron community. Potentially, it could severely compromise important areas of research, especially quantum fluids and cryogenics. In neutron detection where there are alternative choices, NCNR’s strategy to partner is appropriate. To mitigate risk to future instruments, the NCNR should consider expanding its program to develop alternative detector techniques.

Planning is ongoing to convert the reactor from highly enriched uranium fuel to low enriched uranium fuel when a fuel has been developed and approved by the Nuclear Regulatory Commission for operation. The Department of Energy projects that fuel will be available in time for the conversion of reactors regulated by the Nuclear Regulatory Commission starting in 2015. It appears that this can be accomplished without disrupting operations or degrading the performance of the NCNR facility. Users should be informed in a timely fashion if there are changes in operation and performance. With the transition from HEU to LEU fuel, a new deuterium cold source would be beneficial for maintaining the flux at the NCNR to specific instruments. The use of focused beams may also provide an opportunity to broaden the range of experimental capabilities at the NCNR.

Next: 5 The Center as a User Facility »
An Assessment of the National Institute of Standards and Technology Center for Neutron Research: Fiscal Year 2010 Get This Book
× 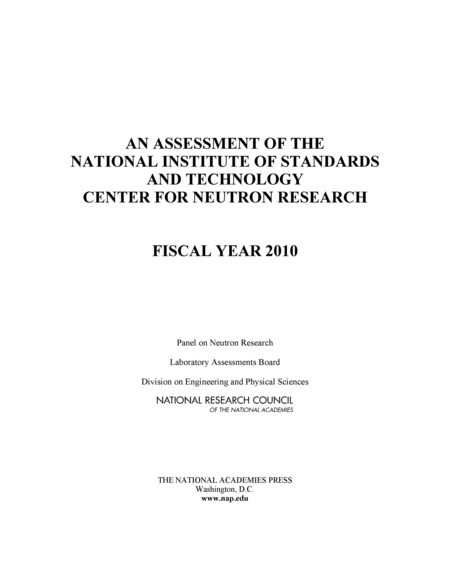 The National Institute of Standards and Technology (NIST) Center for Neutron Research (NCNR) is a national user facility whose mission is to ensure the availability of neutron measurement capabilities in order to meet the needs of U.S. researchers from industry, academia, and government agencies. This mission is aligned with the mission of NIST, which is to promote U.S. innovation and industrial competitiveness by advancing measurement science, standards, and technology in ways that enhance economic security and improve the quality of life.