Get This Book
Visit NAP.edu/10766 to get more information about this book, to buy it in print, or to download it as a free PDF.
« Previous: 6 Water Quality and Missouri River Sediment Management
Page 124 Share Cite
Suggested Citation:"7 Science, Policy, and Future Decision Making Along the Missouri River." National Research Council. 2011. Missouri River Planning: Recognizing and Incorporating Sediment Management. Washington, DC: The National Academies Press. doi: 10.17226/13019.
×

7
Science, Policy, and Future Decision Making Along the Missouri River

As one of the nation’s largest river systems, the Missouri River is of great importance to numerous states, cities and communities, and citizens. This report has documented the fundamental transformation of Missouri River sediment processes during the nineteenth and twentieth centuries. The preregulation river was a free-flowing system characterized by variable channel conditions and a flooding regime that transported vast amounts of sediment and provided rich and varied habitat for its native species. The engineering works built under the Pick-Sloan Plan and the Bank Stabilization and Navigation Project harnessed the river to meet social demands and preferences of the era. Among the consequences and impacts of those engineering works were sharp changes in the river’s sediment processes and major alterations of habitat for native bird, fish, and plant species.

Since passage of the Pick-Sloan Plan and the BSNP in the mid-1940s, the U.S. Congress has assigned lead responsibility for Missouri River flow management to the U.S. Army Corps of Engineers. As new laws, such as the Endangered Species Act, were passed, original management authorities have been redefined. Recent congressional directives have created opportunities for river users to have a more direct voice in Corps river management decision making, and have focused greater attention on ecosystem recovery. These new initiatives include the Missouri River Recovery and Implementation Committee (MRRIC), the Missouri River Ecosystem Restoration Plan (MRERP), and the Missouri River Authorized Purposes Study (MRAPS), all of which will figure prominently in future Missouri River management decisions. Not surprisingly, the creation of these new programs, layered on top

of existing programs for ecosystem mitigation, Master Manual revisions, and Biological Opinion compliance, has led to confusion regarding relationships and boundaries among these new initiatives and the older, existing governance system. Although the new initiatives may ultimately improve Missouri River decision making, they have added to institutional complexity.

The Missouri River basin has seen its share of disputes over shared water and sediment resources. Not only have there been differences of opinion regarding the Corps of Engineers mitigation projects along the lower river, basin states often have held different views on appropriate reservoir release schedules and other decisions. One impetus for the many new initiatives is to address continuing environmental and socioeconomic changes along the river, and to mediate and reconcile the often sharp differences of opinion over operations and other decisions affecting flows of water and the transport and deposition of sediment.

As a consequence of studying the role of sediment in Missouri River management decisions, this committee made several observations regarding river resources and the role of science. These observations fall into two broad categories: (1) trade-off choices and resource limits, and (2) science and decision making. The following two sections are presented in the spirit of contributing to river management decision making and expectations regarding the role of the science community in such decisions.

In many ways the Missouri River is no different from other large U.S. river systems, as difficult choices are inevitable and priorities among competing uses ultimately must be established—especially during periods of high and low river flows. Furthermore, preferences for the goods and services provided by the Missouri dam and reservoir system have changed and shifted over time. Some differences of opinion regarding water releases and mitigation activities along the Missouri River have been highly controversial. This may not always be the case, however, and future conditions on the Missouri River may provide better opportunities for compromise and common understanding.

The Missouri River was fundamentally altered and changed during the twentieth century. The changes represented a conscious, national policy decision to transform the free-flowing, preregulation Missouri River into a system with dams, reservoirs, and a commercial navigation channel. The installation and operation of this extensive water control infrastructure produced many social benefits. This also resulted in unforeseen costs, such as the loss of habitat for native species that may have been underappreciated while most of the dams and river training works were being built. For example, nearly 3 million acres of riverine and floodplain habitat were

altered, and dozens of native fish species today are “now listed as rare, uncommon, and/or decreasing across all or part of their ranges” (NRC, 2002).

Conflict along the river today generally revolves around trade-offs. For example, some parties today desire to regain some functions and benefits of the preregulation Missouri River. In most cases, however, an action to regain such benefits will result in an existing user or sector losing some current, postregulation benefits. When the Corps of Engineers adds sediment to the Missouri River as part of its mandate to improve habitat for native species, agricultural producers and other parties elsewhere in the Missouri basin may feel that they bear “unfair” obligations to limit erosion. Efforts to create habitat can be perceived by those who use the channel for navigation as threatening the channel’s useful depth and width. Other examples of these trade-offs abound: a higher spring rise of the Missouri River to benefit native species poses the potential for increased flooding for communities along the river; drawdowns of Missouri River reservoirs to augment flows for navigation impacts reservoir-based recreation and reduces water supplies in upstream states; and removing revetments along the navigation channel in the name of ecosystem restoration may threaten farmland and infrastructure, as well as reduce depths of the navigation channel. Failure to acknowledge these realities and limits may contribute to lingering disputes and may confound effective decision making. There also may be instances in which small, incremental changes can provide ecosystem benefits without greatly affecting other uses. But these instances are difficult to identify, and they do not require major changes in river operations.

Future trade-offs among Missouri River users will be inevitable. The new programs created by Congress may help communicate information that highlights these trade-off choices and improves the chances of reaching consensus decisions and actions. Effective resolution of these trade-offs will require explicit acknowledgement of their existence, possible sources of conflict, as well as limits of the Missouri River’s goods and services.

This report offers recommendations and encouragement to create a sediment budget and data management system that is regional in scale and easily accessible. It also highlights the scientific uncertainties that accompany many crucial river management decisions and offers advice to strengthen adaptive strategies to promote learning-while-doing. Nonscientific issues also are integral to the decision-making process. Examples of these issues include costs and benefits, social and cultural values, and a variety of federal and state laws. Conflicts regarding management decisions generally can be traced to scientific uncertainties, these other factors, or combinations thereof.

In some instances, the scientific community may be requested to provide advice to help resolve conflicts that are only partly rooted in science. For example, ongoing disputes along the Missouri River regarding discharges of sediment from Corps of Engineers projects into the river to comply with a federal mandate may go beyond basic science-related disagreements. Many current disagreements regarding Missouri River management appear to be related to policy interpretations or political questions related to social values.

The scientific community has important roles in informing decisions regarding ecosystem restoration and species protection. Advice from the science community should address scientific questions about the form and function of the river. Scientific data, and analysis of those data, are crucial for developing management alternatives and predictions of responses of the ecosystem, and species of interest, to management actions. Scientists can help identify uncertainties and alternative outcomes that attend these actions, and can assist in estimating likely outcomes of various choices in the public decision process.

Scientific issues and questions can, however, blend into other related questions such as, “What happens if management of non-native, recreational fisheries is perceived by some as conflicting with recovery of endangered pallid sturgeon?” and “How does acquisition of floodplain lands for mitigation or ecosystem recovery affect local economies?” Decision makers posed with these types of questions must consider not only possible effects on fishes and the broader biotic community, but also possible social and economic effects of a given action. All involved parties need to appreciate that there are distinctions between questions appropriate to scientific inquiry, and questions that are in the domain of policy making. The role of science is to inform policy options, not absolve policy makers from decision-making responsibilities.

Effective and appropriate use of science requires decision makers to acknowledge inherent scientific uncertainties, even as stakeholders may be frustrated if scientists are not willing or able to make clear and precise forecasts of river responses to a given management proposal. Use of “if-then” questions—if management action “x” is taken, then consequences “y” and “z” are likely to result—may help frame and focus scientific questions and direct scientists to explain areas of scientific consensus and the bases for that consensus. This “if-then” question format also means that when uncertainties lead to scientific disagreement, scientists are still responsible for identifying uncertainties and describing their causes. There are instances in which decisions can and must be made in the face of scientific uncertainty. In these cases, scientists may frame predictions in terms of likely outcomes, probabilities, or a range of future scenarios, offering evaluations on the likelihood of different outcomes given the state of knowledge. Where uncertainties abound but decisions need to be made, adaptive management suggests basing decisions on a learning-by-doing approach.

Defining and adhering to boundaries between science and policy is a complicated and challenging process for decision makers, stakeholder groups, and scientists. Effective use of scientific information in Missouri River decision making will require these parties to acknowledge the different domains of science and policy, seek their respective boundaries, and appreciate the limits of knowledge about the river’s natural systems.

Next: References »
Missouri River Planning: Recognizing and Incorporating Sediment Management Get This Book
× 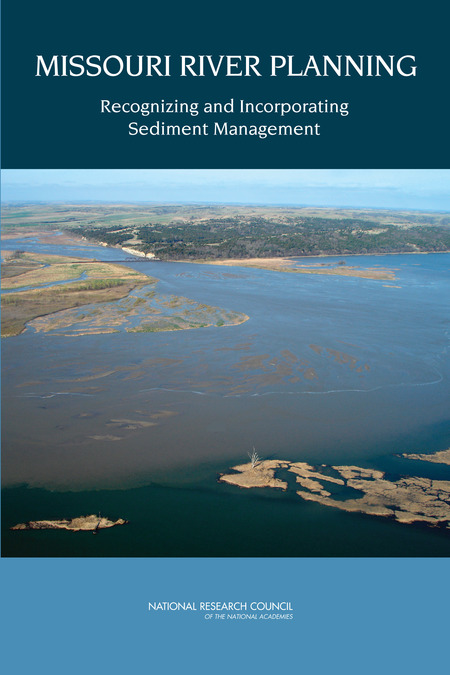 Historically, the flow of sediment in the Missouri River has been as important as the flow of water for a variety of river functions. The sediment has helped form a dynamic network of islands, sandbars, and floodplains, and provided habitats for native species. Further downstream, sediment transported by the Missouri and Mississippi Rivers has helped build and sustain the coastal wetlands of the Mississippi River delta. The construction of dams and river bank control structures on the Missouri River and its tributaries, however, has markedly reduced the volume of sediment transported by the river. These projects have had several ecological impacts, most notably on some native fish and bird species that depended on habitats and landforms created by sediment flow.