Get This Book
Visit NAP.edu/10766 to get more information about this book, to buy it in print, or to download it as a free PDF.
« Previous: 7 SUMMARY AND CONCLUSIONS
Page 135 Share Cite
Suggested Citation:"APPENDIX: CODISTILLATION DURING POTABLE WATER TREATMENT: ANALYSIS OF THE AUSTRALIAN STUDY." Institute of Medicine. 2011. Blue Water Navy Vietnam Veterans and Agent Orange Exposure. Washington, DC: The National Academies Press. doi: 10.17226/13026.
×

Distillation is the oldest method for desalinating marine water for the production of potable water (El-Nashar, 1980). During the 1700s, the US and British navies were making stills from pots; and by the middle 1800s, small stills were being built into shipboard stoves. By the 1940s, all major naval vessels and passenger ships had distillers.

Distillation units were commonly used during World War II to provide sailors with potable water because distillation usually does not require additional chemicals or substantial pretreatment and has relatively low maintenance costs. The committee learned on its site visit to the aircraft carrier, the USS Midway, that marine water is taken up and passes through a sieve to remove large debris such as seaweed; the sieve does not remove particulate matter from the marine water. There was no further filtration of marine water before entering the distillation plant. During thermal distillation, a saline solution is heated to generate water vapor, which is then directed to a cool surface, where it can be condensed to liquid water that will contain little salt. Although water boils at 100°C at atmospheric pressure, thermal distillation can be designed to boil water at lower temperatures and at low pressures. At 25% of atmospheric pressure, for example, water will boil at 65°C; at 10% atmospheric pressure, water will boil at 45°C.

The three types of distillation processes are multistage flash (MSF), multiple-effect distillation, and mechanical vapor compression. MSF distillation uses several stages with successively lower temperature and pressure (for example, stage 1: 64°C and 23 inches Hg and stage 2: 46°C and 27 inches Hg (NAVEDTRA 14151)) to rapidly vaporize (flash vaporize) water, which is then condensed by tubes of the inflowing feed water, recovering energy from the heat of condensation. MSF is the most

common type of distillation used on ships. The ships typically operate MSF with two- to six-stage flash distillers. The ratio of product water to feed water is about 1 gal of product water per 10–20 gal of feed water. MSF distillation units on Navy surface ships range from 6,000 to 100,000 gal/day (Rankin et al., 1975). Distillation will reject almost all dissolved species, but distillers are sensitive to volatile contaminants that may evaporate from the feed stream. Few or no data exist to verify the contaminant load in the potable water onboard Navy ships; if there is a need to understand the concentration of contaminants in potable water, experiments or models would have to be used to reconstruct the distillation process and offer some clarity.

In 2002, researchers at the National Research Centre for Environmental Toxicology (NRCET) and the Queensland Health Scientific Services in Australia conducted a study designed to investigate the potential for exposure of Australian sailors to phenoxy herbicides (such as Agent Orange) contaminated with 2,3,7,8-tetrachlorodibenzo-p-dioxin (TCDD) and dimethylarsinic acid (DMA) through potable water (Muller et al., 2002). The goal of the study, titled “Examination of the Potential Exposure of Royal Australian Navy (RAN) Personnel to Polychlorinated Dibenzodioxins and Polychlorinated Dibenzofurans via Drinking Water” (hereafter the NRCET study), was to determine whether polychlorinated dibenzodioxins (PCDDs) and polychlorinated dibenzofurans (PCDFs) were codistilled during distillation of estuarine waters to produce potable water. Experiments were designed to mimic distillation procedures aboard RAN ships and used a simple rotary evaporator to simulate MSF.

contaminant (an indirect parameter that is correlated to vapor pressure and solubility). The study concluded that substantial codistillation occurred, especially in the first fraction (14%) of the total starting volume of water distilled. Later aliquots of distilled water contained markedly less contaminant. It should be noted that reverse osmosis was not used aboard US Navy ships during the Vietnam War.

The study showed that there may be some codistillation of semi-volatile contaminants during distillation. If the purpose of this experiment was to demonstrate the plausibility of TCDD exposure to sailors via distilled water, then this study is useful; however, the application of these findings to actual shipboard distillation systems requires knowledge of several factors not addressed in the experiment. The significance of this study’s findings for contaminant exposures on Blue Water Navy ships is highly uncertain. Therefore, an independent analysis was conducted in order to determine the likelihood of codistillation of TCDD; this analysis was conducted using a theoretical model.

The committee considered an equilibrium vaporization process in which the entire feed liquid is charged to the still pot and heat is added continuously. Vapor is continuously produced and removed from the well-mixed vessel. In this batch mode of operation, the liquid product is removed at the end of the run. The operation is often called Rayleigh or batch distillation.

The batch distillation experiment was simulated by solving physical and thermodynamic equations using conditions identical to those of the NRCET study experiments and TCDD as the contaminant. Details of the equations follow. The parameters needed for the calculations based on the conditions of the experiments are as follows:

Using those parameters, the fraction (and thus the percentage) of TCDD that was codistilled can be calculated. The calculations reveal 100% codistillation of TCDD into 0.1 L of distillate. Therefore, the concentration of TCDD in the distillate is 400 ng/L (40/0.1). That result is in general agreement with the experimental results reported in the NRCET study (75–95% codistillation). The model simulations indicate that TCDD is readily codistilled and thus will be present in the product water of distillation systems using water that contains TCDD. In the section below the committee presents the thermodynamic equations that support this conclusion.

For a binary mixture of species i and j, mass-balance analysis yields the following equation for batch distillation (King, 1980; Wankat, 1988):

For equilibrium separation processes involving a vapor–liquid system, it is common to use an inherent separation factor termed the relative volatility, which for a binary mixture is defined as

The relative volatility αij can be assumed constant; hence, substituting the relationship between yi and xi (Equation 2) in Equation 1 yields (King, 1980; Wankat, 1988)

For the specific problem at hand of water (W) containing a dioxin congener (D), Equation 3 can be written as

Because the water contains a minute amount of TCDD—that is, xD <<1—Equation 4 simplifies to

Once xD is determined by Equation 6, we can find the fraction of TCDD that was codistilled (that is, ended up in the product water) from

By using Equation 2, the relative volatility, αDW, can be expressed as the ratio of the distribution coefficients of dioxin and water between the liquid and vapor phases:

Because of the very high mole fraction of water in the liquid and the absence of appreciable quantities of inert substances in the vapor, both yW and xW are near 1.00, and KW ≈ 1. Hence, αDW = KD.

The distribution coefficient of TCDD in water, KD, can be determined from the dimensionless Henry constant for TCDD,

where R is the gas constant, T the absolute temperature, P the pressure in the distillation pot, and Vw the molar volume of water.

The distribution coefficient or Henry constant for TCDD at 58°C (331 K) is not readily available in the literature. However, the Clausius–Clapeyron relation can be used to determine the Henry constant at 58°C (Aberg et al., 2008): 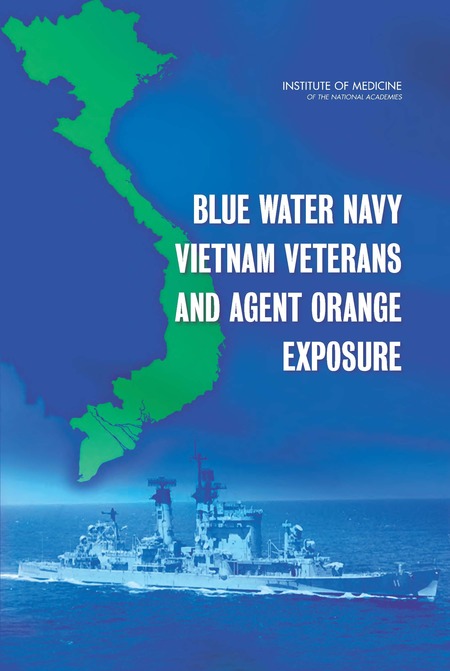 Over 3 million U.S. military personnel were sent to Southeast Asia to fight in the Vietnam War. Since the end of the Vietnam War, veterans have reported numerous health effects. Herbicides used in Vietnam, in particular Agent Orange have been associated with a variety of cancers and other long term health problems from Parkinson's disease and type 2 diabetes to heart disease. Prior to 1997 laws safeguarded all service men and women deployed to Vietnam including members of the Blue Navy. Since then, the Department of Veteran Affairs (VA) has established that Vietnam veterans are automatically eligible for disability benefits should they develop any disease associated with Agent Orange exposure, however, veterans who served on deep sea vessels in Vietnam are not included. These "Blue Water Navy" veterans must prove they were exposed to Agent Orange before they can claim benefits. At the request of the VA, the Institute of Medicine (IOM) examined whether Blue Water Navy veterans had similar exposures to Agent Orange as other Vietnam veterans.