Chapter:Appendix H: Request for Information from the Community

Get This Book
Visit NAP.edu/10766 to get more information about this book, to buy it in print, or to download it as a free PDF.
« Previous: Appendix G: Acronyms
Page 409 Share Cite
Suggested Citation:"Appendix H: Request for Information from the Community." National Research Council. 2013. Solar and Space Physics: A Science for a Technological Society. Washington, DC: The National Academies Press. doi: 10.17226/13060.
×

Request for Information from the Community

The request for information from the solar and space physics community is reprinted below.

Background: As you may know, the Space Studies Board of the National Research Council (NRC) is beginning to organize the next “decadal survey” in solar and space physics (heliophysics). This community-based effort will develop a comprehensive science and mission strategy for the field that updates and extends the first-ever NRC survey, which was completed in 2002. An open website has been created to describe the survey and to provide an opportunity for community input throughout the study process: http://tinyurl.com/2b4e4sh.

The statement of task, which is posted on the website, directs the survey committee to:

1. Provide an overview of the science and a broad survey of the current state of knowledge in the field, including a discussion of the relationship between space- and ground-based science research and its connection to other scientific areas;

2. Identify the most compelling science challenges that have arisen from recent advances and accomplishments;

4. Develop an integrated research strategy that will present means to address these targets.

The scope of the study will include:

•   The structure of the Sun and the properties of its outer layers in their static and active states;

•   The characteristics and physics of the interplanetary medium from the surface of the Sun to interstellar space beyond the boundary of the heliosphere; and

•   The consequences of solar variability on the atmospheres and surfaces of other bodies in solar system, and the physics associated with the magnetospheres, ionospheres, thermospheres, mesospheres, and upper atmospheres of the Earth and other solar system bodies.

The section of the report that provides recommendations to NASA will reflect NASA’s responsibility for flight mission investigations. (However, the survey will consider the space-based activities and programs of other agencies; e.g., NSF’s CubeSat program.)

Recommendations related to ground-based implementations (e.g., ground-based solar observatories) will be directed to the NSF. As noted above, the survey committee is charged with establishing science targets and then matching these targets to notional mission designs. In a change from the previous survey, we will employ an independent contractor to assist in the cost estimation and technical analysis of the notional missions.

We anticipate that the survey committee will recommend a mix of small ($250-$500 million), medium ($500-$750 million), and large ($750-$1000 million) strategic flight investigations appropriate to goals of the Solar-Terrestrial Probes program and the Living With a Star program. Flagship (> $1 billion) flight investigations will be considered if permitted by the budget guidelines provided to the survey committee by NASA. Candidates for individual Explorer and lower-cost flight projects, including sub-orbital programs, will not be prioritized; they will be solicited and selected as PI-led missions on the basis of science merit via NASA’s standard AO processes. However, the strategic value of these smaller mission programs to the overall science agenda will be appraised and described in the report from the study.

Request to the Community: We invite you to write a concept paper (e.g., about a mission or extended mission, observation, theory, or modeling activity) that promises to advance an existing or new scientific objective, contribute to fundamental understanding of the Sun-Earth system, and/or facilitate the connection between science and societal needs (e.g., improvements in space weather prediction).

Note that missions that had been prescribed in the 2003 survey (The Sun to the Earth—and Beyond) or other recent NRC reports but have not yet been formally confirmed for implementation will need to be reprioritized for inclusion in the present survey (with the exception, per NASA, of Solar Orbiter and Solar Probe Plus).

The ideas and concepts received will be reviewed by one or more of the survey’s study panels, which are organized to address the following themes:

Concept papers can range from a specific instrument or mission proposal to a white paper that examines an issue of broad concern to the community. They may be directed for action by NASA or the NSF; indeed, our audience includes all federal agencies responsible for the conduct of solar and space physics research and operations. We encourage concept papers that, for example, examine the potential of novel instruments or measurement techniques, including the use of orbital or suborbital vehicles of various sizes. In addition, we welcome concept papers on the use of existing or new ground-based facilities, as well as the potential of laboratory experiments. In all cases, concept papers should include the identification of a science and/or societal objective and motivate the importance of achieving this objective in the context of the state of the field.

Initiatives and concepts that are cross-cutting among these themes are particularly encouraged. We anticipate that one or more of the concepts will be selected by each panel for a detailed technical and cost assessment. Panel recommendations and the technical and cost assessments will be provided to the decadal survey steering committee, which is charged with writing a final report that includes targeted recommendations for the agencies. All responses will be considered non-proprietary public information for distribution with attribution. The concept papers should be no longer than seven single-spaced pages in length including figures and tables (but not including footnotes), and should provide the following information, if possible (see next page for more formatting requirements):

1. For proposed observations, technology innovations, or missions, a summary of the science concept, including the observational variable(s) to be measured, the characteristics of the measurement if known (accuracy, spatial and temporal resolution), and domain of the observation. For proposed theory, modeling, or cross-cutting science themes, a summary of the science concept, key opportunities to be addressed, and approach used.

2. A description of how the proposed science concept will help advance solar and space physics science or provide a needed operational capability for the next decade and beyond.

3. For proposed observations, technology innovations and missions, a rough estimate of the total cost (FY10 dollars), including launch, of a proposed mission over ten years, if it can be estimated. For an “operational” mission, the costs should include one-time costs associated with building the instrument and launch and ongoing operational costs. Please describe the supporting rationale for the total mission cost estimate to understand the confidence that the mission considered could fall within the cost bins identified (i.e. small, medium or large). For proposed theory, modeling, and cross-cutting science themes, an estimated total cost, including all key phases of the proposed project.

4. A description of how the proposed concept meets one or more of the following criteria, which will be used to evaluate the candidate proposals:

a. Is identified as a high priority or requirement in previous studies or roadmaps (for example, the earlier NRC decadal survey);

b. Makes a significant contribution to more than one of the Panel themes;

g. Has an appropriate degree of readiness (technical, resources, people);

h. Fits with other national and international plans and activities.

The description should provide enough detail that the potential value and feasibility can be evaluated by an independent group of experts. We note that the National Research Council’s ongoing Astronomy and Astrophysical Decadal Survey solicited Science White papers for their “Astro2010” activity. Examples of community input to their request can be found at http://sites.nationalacademies.org/BPA/BPA_050603.

Submissions to the survey, which will be posted on a public website, can be made by following instructions on the survey website (http://tinyurl.com/2b4e4sh).

Next: Appendix I: List of Responses to Request for Information »
Solar and Space Physics: A Science for a Technological Society Get This Book
× 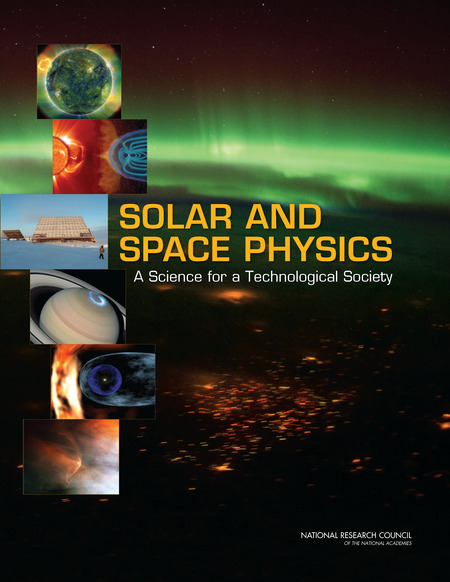