Public Response to Alerts and Warnings on Mobile Devices: Summary of a Workshop on Current Knowledge and Research Gaps (2011)

Get This Book
Visit NAP.edu/10766 to get more information about this book, to buy it in print, or to download it as a free PDF.
« Previous: 3 Communicating During a Crisis
Page 31 Share Cite
Suggested Citation:"4 Public Education and Training." National Research Council. 2011. Public Response to Alerts and Warnings on Mobile Devices: Summary of a Workshop on Current Knowledge and Research Gaps. Washington, DC: The National Academies Press. doi: 10.17226/13076.
×

Public education and outreach not only can help people understand the purpose and capabilities of an alerting or warning system but also can prepare and motivate them to take appropriate action when alerts or warnings are received. In the workshop session on public education and training, Mark Benthien, Southern California Earthquake Center, discussed his experience with education initiatives pertaining to earthquakes. Michele Wood, California State University, Fullerton, discussed current research on public education campaigns, and Daryl Rand, Harrison Advertising/The Rand Group, examined the education question from a marketing perspective. Inés Pearce, Pearce Global Partners, Inc., was moderator for the panel. This chapter provides an integrated summary of these presentations and the discussions that followed, organized by topic.

AN EXAMPLE: THE GREAT CALIFORNIA SHAKEOUT

Earthquakes are typically “no-notice” events, which means that the first alert that a person generally receives of an earthquake is the feeling of the ground shaking. (Today it is possible to provide very limited advance alerts to those sufficiently far from the epicenter of an earthquake; see Box 4.1 for a description of earthquake detection and alerting systems.) Those affected by an earthquake do not have the opportunity that those receiving a hurricane alert might, to take time gathering information about the hazard and to decide what actions to take; nor is there an opportunity (or need), as there might be with severe weather, for people

to personally confirm the event. As a result, it is especially important to provide the public with advance education and training about earthquake risks and proper protective action.

The Earthquake Country Alliance (ECA) is a statewide coalition of California organizations and individuals who are developing materials and activities with consistent messaging. The goal is twofold: to educate people about preparedness and to educate people about protective actions. The ECA focuses on practicing simple protective action, such as that recommended in the easily remembered phrase “Drop, cover, and hold on.” The goal is that, through drills, not only will people learn appropriate protective behavior, but they would practice it instinctively when they received an alert. Annually the ECA coordinates a statewide drill called the Great California ShakeOut. The ECA provides manuals to participating organizations on how to perform an earthquake drill, as most organizations have not held such drills before. At the appointed time, the ECA also issues the test alert.

In addition to teaching people the simple actions advocated in “Drop, cover, and hold on,” the ShakeOut also provides an opportunity to educate participants on preparedness practices. Educating those living in earthquake country about preparedness is extremely important. To be properly prepared before an earthquake occurs, the ECA asks that people do the following: secure their living space, ensuring that top-heavy furniture, water heaters, television sets, and other heavy objects will not fall during an earthquake; store water, 1 gallon per person per day for at least 3 days, but ideally up to 2 weeks; and have a fire extinguisher and ensure that family members know how to use it properly. The ShakeOut is having an impact, as the state of California sees an increase in the purchase of preparedness products at the time of the drill.

The ShakeOut started in 2008 with the Great Southern California ShakeOut. November 12-16, 2008, was a week of special events to educate and encourage Southern Californians to be prepared; a regional drill was held November 13, 2008. There were 5.57 million participants—chiefly schools but also businesses, communities, governments, and families. In 2009 the event went statewide, with 6.9 million participants. The Shake-Out is now an annual event for which the ECA partners with state agencies and the Federal Emergency Management Agency (FEMA). Although the ECA has been successful in recruiting businesses, schools, and organizations as participants, individual registrations are quite low. The ECA is using social media to encourage people to participate and also to count people who may not be registering.

Starting in 2011, participation in the drills will be extended to states in the central United States, coinciding with the bicentennial of large earthquakes which struck that region in 1811 and 1812. Similar drills are being

planned or are under consideration in other regions that have historically experienced severe earthquakes, including the Pacific Northwest, Utah, and Alaska.

Much time and money have been spent educating the public in the areas of preparedness and emergency management. However, such educational campaigns often have not proven very fruitful for three key reasons: (1) The time or space allocated for public service announcements is limited, and many pro bono commercials run late at night. (2) Emergency management professionals may not be familiar with marketing. Indeed, few undergraduate or graduate programs provide courses in public education, outreach, or marketing. (3) Professionals with marketing expertise tend not to be involved in emergency planning and preparation activities.

Several organizations have aimed to close the gaps listed above by creating guidelines for public awareness. Two of them, the Emergency Management Accreditation Program (EMAP), a nonprofit organization that provides assessment and accreditation of emergency management programs and personnel, and CBS Outdoor, a for-profit advertisement managing firm, have developed a set of blueprints for creating public awareness plans and educational initiatives. EMAP’s public awareness program guideline, Assessing Your Disaster Public Awareness Program, was issued in 2006.1 In formulating its guidelines, EMAP convened experts from a wide variety of disciplines. The contribution of CBS Outdoor was An Approach to Preparedness, a blueprint for emergency managers to use in creating a public education and outreach plan.2

The blueprints from EMAP and CBS Outdoor, along with an extensive body of earlier work,3 lay out guidelines for the development of success-

In the discussion following the panel presentations, workshop participants made the following observations regarding planning and implementing effective educational campaigns:

Next: 5 Communicating with At-Risk Populations »
Public Response to Alerts and Warnings on Mobile Devices: Summary of a Workshop on Current Knowledge and Research Gaps Get This Book
× 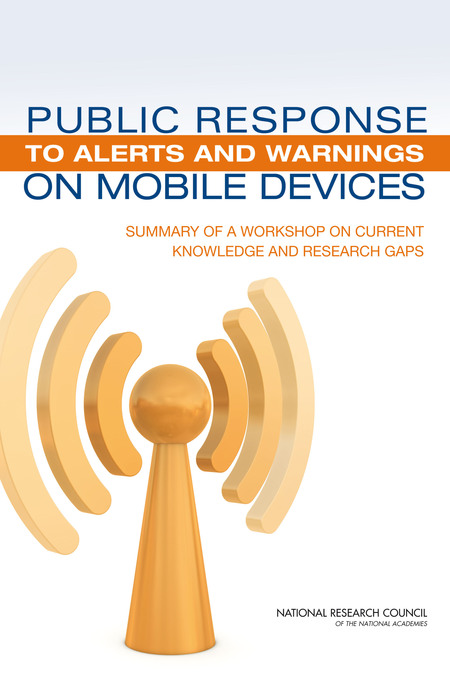