Get This Book
Visit NAP.edu/10766 to get more information about this book, to buy it in print, or to download it as a free PDF.
Page i Share Cite
Suggested Citation:"Front Matter." National Research Council. 2011. Materials Needs and R&D Strategy for Future Military Aerospace Propulsion Systems. Washington, DC: The National Academies Press. doi: 10.17226/13144.
×

National Materials and Manufacturing Board

This study was supported by Contract No. W911NF-08-D-0005 between the National Academy of Sciences and the Department of Defense. Any opinions, findings, conclusions, or recommendations expressed in this publication are those of the authors and do not necessarily reflect the views of the organizations or agencies that provided support for the project.

This report is available in limited quantities from

National Materials and Manufacturing Board

Additional copies of the report are available from the

Copyright 2011 by the National Academy of Sciences. All rights reserved.

Missouri University of Science and Technology

NATIONAL MATERIALS AND MANUFACTURING BOARD

Significant advances in the performance and efficiency of jet and rocket propulsion systems are strongly dependent on the development of lighter, more durable high-temperature materials. Materials development has been significantly reduced in the United States since the early 1990s, when the Department of Defense (DOD), the military services, and industry had very active materials development activities to underpin the development of new propulsion systems. This resulted in significant improvements in all engine characteristics and established the United States at the leading edge of global propulsion technology.

In 2006, a study from the National Research Council (NRC) titled A Review of United States Air Force and Department of Defense Aerospace Propulsion Needs identified the need for technology advances in high-speed turbine engines, ram/scramjet/pulse detonation engines, rocket propulsion, combined cycle engines, and ultra-efficient propulsion to meet future military needs.1 Each of the identified needs requires advances in propulsion technology, and those advances are strongly dependent on materials development activities. The DOD, the sponsor of the present study, thus identified the following tasks to be carried out by the present study committee (see Appendix A for the complete statement of task):

To accomplish this study, the National Research Council established the Committee on Military Needs and R&D Strategy for Future Military Aerospace Propulsion Systems (see Appendix C for biographies of the committee members). The committee visited and received presentations from the sponsor, government research agencies, major propulsion companies, university researchers, and the American Institute of Aeronautics and Astronautics Materials Technical Committee, which covers the propulsion and materials science domains.

In addition, the committee was provided the document titled Materials for Advanced Aerospace Propulsion and Power Systems (AFRL-RZ-WP-TM-2008-2171). Restricted by the International Traffic in Arms Regulations (ITAR), that document contains the current plan for materials development within the Air Force Research Laboratory (AFRL) and was used as the baseline for current planned R&D efforts within the DOD. Owing to the restricted nature of that AFRL baseline document, the committee’s specific assessment of current and planned U.S. R&D efforts in mate rials for aerospace propulsion is presented in an ITAR-restricted appendix (Appendix D), the text of which is not releasable to the public.

My personal thanks go to all of the members of the committee for their commitment of considerable time and energy. I am particularly grateful to Mike Hudson, Eric Jumper, Bob Latiff, Wesley Harris, and Sylvia Johnson for leading major segments of the study. The committee is also very grateful to Erik Svedberg, the study director, and to Teri Thorowgood, the administrative coordinator until December 2009, for guiding us through the study process. Erik Svedberg not only steered the committee but also provided valuable research contributions.

The committee hopes that this report will increase the efficiency, level of effort, and impact of DOD materials development activities. Budgetary restrictions demand increased collaboration and focus, as significant improvements in the performance and efficiency of U.S. military aerospace propulsion systems are both possible and needed.

This report has been reviewed in draft form by individuals chosen for their diverse perspectives and technical expertise, in accordance with procedures approved by the National Research Council’s (NRC’s) Report Review Committee. The purpose of this independent review is to provide candid and critical comments that will assist the institution in making its published report as sound as possible and to ensure that the report meets institutional standards for objectivity, evidence, and responsiveness to the study charge. The review comments and draft manuscript remain confidential to protect the integrity of the deliberative process. We wish to thank the following individuals for their review of this report:

Although the reviewers listed above have provided many constructive comments and suggestions, they were not asked to endorse the conclusions or recommendations, nor did they see the final draft of the report before its release. The

review of this report was overseen by Hyla Napadensky, retired vice president, Napadensky Energetics, Inc. Appointed by the NRC, she was responsible for making certain that an independent examination of this report was carried out in accordance with institutional procedures and that all review comments were carefully considered. Responsibility for the final content of this report rests entirely with the authoring committee and the institution.

The committee also thanks its guest speakers, who added to the members’ under standing of the materials issues related to future aerospace propulsion systems:

Next: Summary »
Materials Needs and R&D Strategy for Future Military Aerospace Propulsion Systems Get This Book
× 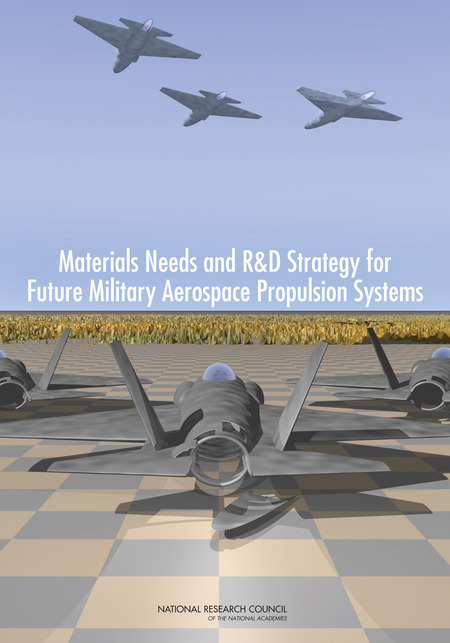 The ongoing development of military aerospace platforms requires continuous technology advances in order to provide the nation's war fighters with the desired advantage. Significant advances in the performance and efficiency of jet and rocket propulsion systems are strongly dependent on the development of lighter more durable high-temperature materials. Materials development has been significantly reduced in the United States since the early 1990s, when the Department of Defense (DOD), the military services, and industry had very active materials development activities to underpin the development of new propulsion systems. This resulted in significant improvements in all engine characteristics and established the United States in global propulsion technology.

Many of the significant advances in aircraft and rocket propulsion have been enabled by improved materials and, materials manufacturing processes. To improve efficiency further, engine weight must be reduced while preserving thrust. Materials Needs and Research and Development Strategy for Future Military Aerospace Propulsion Systems examines whether current and planned U.S. efforts are sufficient to meet U.S. military needs while keeping the U.S. on the leading edge of propulsion technology. This report considers mechanisms for the timely insertion of materials in propulsion systems and how these mechanisms might be improved, and describes the general elements of research and development strategies to develop materials for future military aerospace propulsion systems. The conclusions and recommendations asserted in this report will enhance the efficiency, level of effort, and impact of DOD materials development activities.