Get This Book
Visit NAP.edu/10766 to get more information about this book, to buy it in print, or to download it as a free PDF.
« Previous: Front Matter
Page 1 Share Cite
Suggested Citation:"Summary." National Research Council. 2011. Sustainability and the U.S. EPA. Washington, DC: The National Academies Press. doi: 10.17226/13152.
×

Sustainability is based on a simple and long-recognized factual premise: Everything that humans require for their survival and well-being depends, directly or indirectly, on the natural environment.1 The environment provides the air we breathe, the water we drink, and the food we eat. It defines in fundamental ways the communities in which we live and is the source for renewable and nonrenewable resources on which civilization depends. Our health and well-being, our economy, and our security all require a high quality environment.

The U.S. Environmental Protection Agency (EPA) has been working to create programs and examining applications in a variety of areas to better incorporate sustainability into decision making at the agency. To further strengthen the analytic and scientific basis for sustainability as it applies to human health and environmental protection, EPA asked the National Research Council (NRC) to convene a committee under the Science and Technology for Sustainability Program to provide an operational framework for integrating sustainability as one of the key drivers within the regulatory responsibilities of EPA. Specifically, the committee was tasked to answer four key questions:

The NRC has looked in depth at the use of the RA/RM framework as a decision-making tool at EPA.2 This study was to build on that in answering these four key questions. EPA has undertaken several sustainability initiatives and can claim success in developing processes leading toward a more sustainable future. EPA has established various programs incorporating sustainability at the program office and regional level and has adopted a sustainability research plan and highlighted sustainability in its strategic plan for 2011–2015; however, the agency recognizes that to obtain the benefits of using sustainability as a process and as a goal, it needs to further improve and institutionalize sustainability. Paul Anastas, the assistant administrator for research and development at EPA, stated, “Sustainability is our true north. The work that we do—the research, the assessments, the policy development—is part of ensuring that we have a sustainable society; a sustainable civilization.”3

The growing identification of sustainability as both a process and a goal to ensure long-term human well-being is based on four converging drivers. The first is the recognition that current approaches aimed at decreasing existing risks, however successful, are not capable of avoiding the complex problems in the United States and globally that threaten the planet’s critical natural resources and put current and future human generations at risk, including population growth, the widening gaps between the rich and the poor, depletion of finite natural resources, biodiversity loss, climate change, and disruption of nutrient cycles. Second, sophisticated tools are increasingly available to address cross-cutting, complex, and challenging issues that go beyond the current approach, which is, risk management of major threats. Third, sustainability is being used by international organizations as a common approach to address the three sustainability pillars (social, environmental, and economic issues) in agreements in which the United States is an active participant. Finally, the potential economic value of sustainability to the United States is recognized to not merely decrease environmental risks but also to optimize the social and economic benefits of environmental protection.

To accomplish its task of answering the four key questions posed by EPA, the committee held meetings in December 2010 and February 2011 and conducted weekly conference calls to discuss the report draft. The February meeting was a weeklong intensive session, which included extensive review and discussion of relevant literature, deliberation, and drafting of the report. In addition, data-gathering sessions that were open to the public were held during both meetings, where the committee heard from EPA officials, state-level environmental agencies, industry,

universities, and nongovernmental organizations that provided a range of perspectives on sustainable development and environmental stewardship. The committee addressed its task by providing guidance to EPA on the processes necessary to incorporate sustainability into the agency’s work. The committee did not provide guidance on the specific direction the agency should take to accomplish this task.

The committee reviewed a large body of written material on sustainability in the United States, as well as internationally, and reviewed many other documents related to EPA’s structure and function. The committee also did not devote significant time to defining sustainability but used the definition from Executive Order 13514, where it is defined as

Sustainability: “to create and maintain conditions, under which humans and nature can exist in productive harmony, that permit fulfilling the social, economic, and other requirements of present and future generations” (NEPA[1969]; E. O.13514[2009]4).

The committee emphasizes in the report that the adoption of the Sustainability Framework and the application of the Sustainability Assessment and Management approach to particular EPA programs, activities, and decisions are discretionary. The committee expects that EPA will choose where to focus its attention and resources in operationalizing sustainability and in implementing its agenda and will adapt the scale and depth of the assessment according to the type of decision and its potential impact. Although it will take time and experience to incorporate sustainability broadly into EPA’s culture and process, the committee anticipates that over time there will be an increasing use of the framework.

There is a broad range of sustainability activities in other federal agencies, and the committee envisions EPA working closely with these other agencies as they implement the framework. Although addressing how EPA should engage other agencies is beyond the scope of this current report, this effort will complement other programs that are addressing national and global needs for integrating sci-

ence and technology for sustainability, such as the National Science and Technology Council’s Committee on Environment, Natural Resources, and Sustainability. In addition to engaging other agencies as EPA implements the framework, other stakeholders will also be important to engage, such as state regulators, local officials, industry, academia, community and advocacy groups, and the international community. This will better inform agency decision makers as the framework is refined to promote innovative solutions that are enriched by the growing knowledge of the interconnections of societal, environmental, and economic systems.

As with all decision making at EPA, uncertainty needs to be acknowledged and addressed, the approach needs to be transparent, and key stakeholders need to be engaged. In addition to uncertainty, tradeoff and synergy analysis is a fundamental component of the Sustainability Assessment and Management approach. The objective is to maximize social, environmental, and economic benefits of a decision and to minimize the adverse effects of conflicts among the three pillars.

The committee limited its recommendations to EPA, but these recommendations are pertinent to the concerted effort by all federal agencies and sectors of society needed to meet the challenges of achieving a sustainable future. The following recommendations were identified by the committee as key recommendations because of their importance in directly addressing the four key questions of the statement of task:

5 Sustainability options and subsequent analyses refer to the range of options and the associated social (including health), environmental and economic impacts for each option along with any tradeoff analyses that may have been undertaken.

6 Commonly referred to in the business community, breakthrough objectives are goals that extend far beyond the current capabilities and experiences of an organization and require new strategies and approaches to ensure successful attainment of these goals. These objectives are generally designed to improve performance throughout an organization.

7 Throughout the report, the committee refers to indicators and associated metrics. Indicators, in general, are measures that provide information on the state of, or change in, a system (see Box 3-3).

Next: 1 Introduction »
Sustainability and the U.S. EPA Get This Book
× 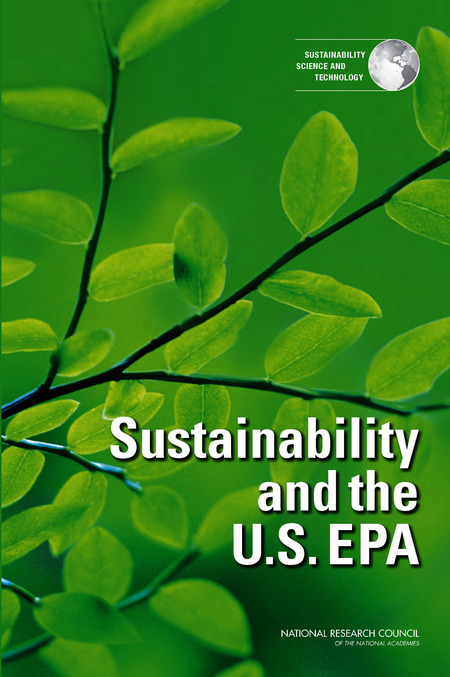 Sustainability is based on a simple and long-recognized factual premise: Everything that humans require for their survival and well-being depends, directly or indirectly, on the natural environment. The environment provides the air we breathe, the water we drink, and the food we eat.

This framework, Sustainability and the U.S. EPA, provides recommendations for a sustainability approach that both incorporates and goes beyond an approach based on assessing and managing the risks posed by pollutants that has largely shaped environmental policy since the 1980s. Although risk-based methods have led to many successes and remain important tools, the report concludes that they are not adequate to address many of the complex problems that put current and future generations at risk, such as depletion of natural resources, climate change, and loss of biodiversity. Moreover, sophisticated tools are increasingly available to address cross-cutting, complex, and challenging issues that go beyond risk management.

The report recommends that EPA formally adopt as its sustainability paradigm the widely used "three pillars" approach, which means considering the environmental, social, and economic impacts of an action or decision. Health should be expressly included in the "social" pillar. EPA should also articulate its vision for sustainability and develop a set of sustainability principles that would underlie all agency policies and programs.