Get This Book
Visit NAP.edu/10766 to get more information about this book, to buy it in print, or to download it as a free PDF.
« Previous: Front Matter
Page 1 Share Cite
Suggested Citation:"1 Introduction." Institute of Medicine. 2012. Public Engagement and Clinical Trials: New Models and Disruptive Technologies: Workshop Summary. Washington, DC: The National Academies Press. doi: 10.17226/13237.
×

Experts believe well below half of medical treatments patients receive are supported by adequate scientific evidence (IOM, 2007). Discussions of health care quality over the past two decades increasingly have employed terms such as “evidence-based medicine” and “learning health care system.” While these terms capture important concepts for professionals, they may come as a surprise to patients and the public, many of whom might assume medicine already is based on evidence and that the health system already does constantly learn of and implement new, better methods of treatment. Patients and the public might also believe that new therapies are tested in individuals similar to themselves (e.g., age, gender, race, ethnicity, disease state) when in reality there is a lack of diversity in clinical trial patient populations.

What the concepts of “evidence-based medicine” and “learning health care system” have in common is their reliance on the accumulation of medical knowledge based on science, not hope, and, further, that clinicians would take that knowledge out of the medical textbooks and laboratory notebooks and apply it in the care of individual patients and patient populations.

Clinical trials are the linking step that enables basic research findings to emerge at the patient’s bedside and in physicians’ examining rooms. The questions clinical trials seek to answer change over time, depend-

ing on advances in basic research and the population health problems they are intended to address. Potential new treatments must be tested in humans in order to find out whether they “work” and whether they cause harm (see Appendix B for an overview of the clinical trials process set forth in the workshop summary from an earlier Institute of Medicine [IOM] workshop in this workshop series). Clinical trials can comprise a series of rather elaborate steps, and the rationale for these trials may not be well understood by the public. An adequate infrastructure to support the efficient and effective conduct of the nation’s clinical trials enterprise can help ensure that the system does not become too narrow a bottleneck, impeding the flow of discovery from science to practice.

Meanwhile, biomedical research is advancing rapidly, and certain significant problems in clinical trials have hindered their ability to keep pace with demands to translate discoveries into improved patient care. In short, as discussed at a 2009 workshop of the IOM’s Forum in Drug Discovery, Development, and Translation, there is concern that “the current clinical trials enterprise in the United States is unable to produce the high-quality, timely, and actionable evidence needed to support a learning health care system” (IOM, 2010a). Among the broad categories of problems identified at that workshop were:

1.  the length of time and high financial cost of clinical trials;

2.  delays resulting from the many regulatory requirements for studies that involve human subjects;

3.  the generally fragmented way clinical trials are prioritized and undertaken;

5.  lack of involvement of community physicians and their needs in the development and conduct of clinical trials; and

6.  dwindling incentives for and attractions of a career as a clinical trial investigator.

A final significant problem cited at the 2009 workshop became the focus of this workshop: the increasing difficulty of recruiting and retaining an appropriate human subject population for specific clinical trials. As discussed at that meeting and in subsequent discussions of the IOM Forum, many clinical trials never recruit the number of people needed, and others accrue patients far too slowly, and the scale of need is substantial. In the United States in 2009, there were almost 11,000 clinical trials testing various medical interventions, mostly (59 percent) new drugs. Collectively, it was hoped these trials would enroll some 2.8 million people (IOM, 2010a).

In this workshop, titled “Public Engagement and Clinical Trials: New Models and Disruptive Technologies,” the issue of participation in trials

was put in a large frame, with the more general problem seen as one of a lack of support for clinical trials by patients and families, by community leaders, by academic medical centers, and even by practicing physicians, who may not always seek out trials for their patients or encourage them to participate, and, in some cases, even discourage participation. Forum members have identified that successfully engaging these broad and diverse publics in the clinical trials enterprise is a substantial challenge.

The workshop covered the topics of recruiting and retaining people to serve as trial participants, increasing practicing clinicians’ participation in and referrals to trials, and strengthening the public opinion climate in which clinical trials are carried out and, ultimately, brought into routine medical practice.

Workshop co-host Dennis Charney, Dean, Mount Sinai School of Medicine, set the tone for the meeting at its outset by saying that the ultimate success of his school and its new strategic plan will be based not on “how many papers we publish, or grants we get.” Success, he said, will depend on the answer to the question, “Did we contribute to changing the practice of medicine for the better?” He added that a key element of that contribution will be the school’s contribution to testing new medicines and therapies.

According to meeting chair Jeffrey Drazen, Editor-in-Chief, New England Journal of Medicine, testing medical treatments through clinical trials requires that people put themselves at risk. However, the evidence gained through successful clinical trials can ultimately reduce the uncertainty in medical decision making. Drazen pointed out that, several decades ago, the medical literature provided information on results of tests in very small groups of patients—10, 15, perhaps a hundred. Such small groups will show a therapeutic effect only if it is dramatic. For more subtle but meaningful effects and for refinements of existing treatments, a thousand, or even ten thousand, patients are needed for an effect to be apparent. Meanwhile, sophisticated statistical tools have been developed that enable much more refined hypothesis testing. Now, Drazen noted, the stumbling block is recruiting a sufficient number of patients for the trials themselves.

Medical progress needs more than a sound scientific idea that can be translated into clinical care in the form of an intervention, whether that is a drug, device, or behavioral intervention. Progress requires a population willing to put itself at risk. “The message of this meeting,” Drazen said, “is that unless we can persuade more people to put themselves at risk, the rate at which we will be gathering knowledge will become smaller and smaller.”

This is not easy, because it requires people to admit that the current medical system does not know the best answer to their problems. Drazen

commented that when patients say to him, “I don’t want to be a guinea pig,” he responds, “If I treat you based on what we know about your situation, you are a guinea pig anyway, because I don’t know what works. At least this way, your therapy will teach us something.” And, he adds, many other people may benefit from that knowledge in the future.

Next: 2 Framing the Problem »
Public Engagement and Clinical Trials: New Models and Disruptive Technologies: Workshop Summary Get This Book
× 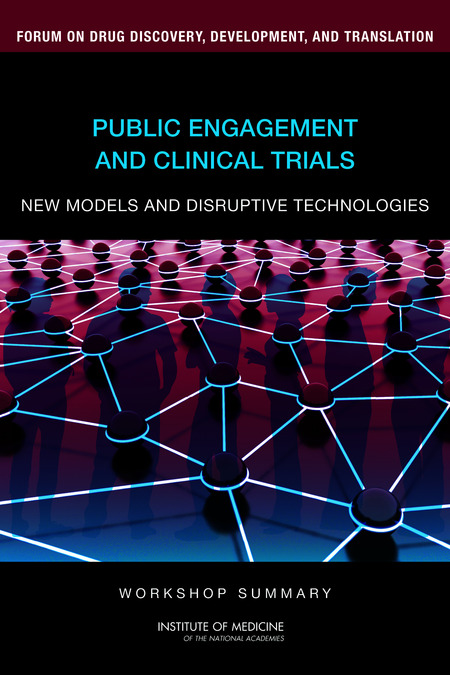