Get This Book
Visit NAP.edu/10766 to get more information about this book, to buy it in print, or to download it as a free PDF.
« Previous: Appendix E: Available Models of Medium- to Heavy-Duty Hybrid and Electric Trucks
Page 166 Share Cite
Suggested Citation:"Appendix F: Proposed Mechanism for Obtaining Hybrid Vehicle Credits." National Research Council. 2012. Review of the 21st Century Truck Partnership, Second Report. Washington, DC: The National Academies Press. doi: 10.17226/13288.
×

For the heavy-duty pickup truck and van hybrid class of vehicles with gross vehicle weight ratings [GVWRs] between 8,500 and 14,000 lb (that are not already covered under the Model Year 2012-2016 light-duty truck and medium-duty passenger vehicle greenhouse gas [GHG] standards), the agencies have proposed that testing would be done using adjustments to the test procedures developed for light-duty hybrids, using the light-duty Federal Test Procedure (FTP) and the Highway Fuel Economy Test (HWFET), but extending the requirement for chassis certification for CO2 emissions to diesel-powered vehicles. Currently, chassis certification is a gasoline requirement and a diesel option. Manufacturers would be allowed to continue to certify engines for criteria pollutant (non-GHG) requirements as they do today.

The EPA and NHTSA fuel-consumption standards are expressed on a gal/100 mile basis, and that would apply to a manufacturer’s fleet of heavy-duty pickup trucks and vans with a GVWR from 8,500 to 14,000 lb. The credits for the hybrid vehicle would be calculated according to the Averaging, Banking, and Trading (ABT) program described by an equation for fuel consumption credits given later in this section.

In addition to production weighting, the credit calculations include a factor for the useful life, in miles, in order to allow the expression of credits in gallons. The following equation is used to calculate credits (debits) and account for the amount that the family limit is below (above) the standard, the payload tons, the sales volume, and the useful life.

Volume = Total production of vehicles in the regulatory category

For vocational vehicles and combination tractors incorporating hybrid powertrains, the agencies specify two methods for establishing credits. The first method uses chassis dynamometer evaluation of the vehicle, and the second method uses engine dynamometer evaluation with the powerpack in either a (1) pre-transmission format or a (2) post-transmission format. Each method requires a comparison test of the actual physical product, because the agencies are not aware of analytical models that can assess the technology.

Similar to heavy-duty pickup and van hybrids, to generate credits for hybrid vocational vehicles, full vehicle chassis dynamometer testing is a straightforward basis for comparing fuel consumption performance of hybrid vehicles to conventional vehicles. The agencies specify two sets of duty cycles for vocational trucks to evaluate the benefit depending on the vehicle application. The key difference between the two sets is that one does not include operation of a power take-off (PTO) unit while the other does. For example, delivery trucks do not operate a PTO while bucket and refuse trucks do.

The duty cycles that apply to hybrid powertrains without a PTO system are shown in Table F-1 .

The transient cycle, derived from the California Air Resources Board (CARB) Heavy-Duty Truck 5 Mode Cycle, is 668 seconds long and travels 2.84 miles. The cycle contains 5 stops and contains 112 seconds of idling. The maximum speed of the cycle is 47.5 mph with an average speed of 15.3 mph. The High Speed and Low Speed Cruise modes reflect constant speed cycles at 65 mph and 55 mph, respectively, which are representative of drivers using cruise control whenever possible. The final rules include a new optional PTO test cycle in addition to the standard set of test cycles in order for manufacturers of advanced PTO systems to demonstrate in the laboratory environment fuel consumption reductions that would be realized from their systems in the real world. The composite PTO test cycle for utility and refuse trucks is described in greater detail in EPA/NHTSA (2011b, see Table 3-23).

The engine test procedure involves exercising the conventional engine and the hybrid-engine system based on an engine testing strategy. Real-world functionality would need to be accurately represented. The testing would also need to recover vehicle kinetic energy. The agencies specify the use of the Heavy-Duty Engine FTP cycle for evaluation of hybrid vehicles, which is the same test cycle specified for engines used in vocational vehicles. Engine dynamometer evaluation may be undertaken in one of two ways:

2.   Post-transmission power-pack testing, which includes the transmission, would require a vehicle-like duty cycle, which provides the appropriate speeds and torques to match field operation.

The following equation for the credits (debits) accounts for the amount that the family emission limit is below (above) the standard, the payload tons, the production volume, and the useful life:

Volume = (Projected or actual) production volume of the vehicle family

The final rules include a provision for obtaining credits for introducing advanced technologies to provide an incentive for their introduction. A 1.5 multiplier will be applied to these credits, but the total credits are capped in any model year. Hybrid powertrain designs that include energy storage systems are one of the advanced technologies defined by the agencies. 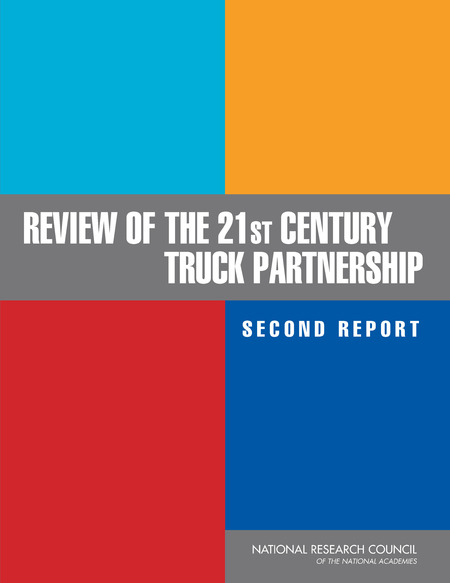 In July 2010, the National Research Council (NRC) appointed the Committee to Review the 21st Century Truck Partnership, Phase 2, to conduct an independent review of the 21st Century Truck Partnership (21CTP). The 21CTP is a cooperative research and development (R&D) partnership including four federal agencies-the U.S. Department of Energy (DOE), U.S. Department of Transportation (DOT), U.S. Department of Defense (DOD), and the U.S. Environmental Protection Agency (EPA)-and 15 industrial partners. The purpose of this Partnership is to reduce fuel consumption and emissions, increase heavy-duty vehicle safety, and support research, development, and demonstration to initiate commercially viable products and systems. This is the NRC's second report on the topic and it includes the committee's review of the Partnership as a whole, its major areas of focus, 21CTP's management and priority setting, efficient operations, and the new SuperTruck program.