Research Universities and the Future of America: Ten Breakthrough Actions Vital to Our Nation's Prosperity and Security: Summary (2012)

A Charge from Congress

Expressing concern that the nation’s universities are at risk, the U.S. Congress asked the National Academies to assess the competitive position of America’s research universities, both public and private, and to respond to the following question:

What are the top 10 actions that Congress, the federal government, state governments, research universities, and others can take to assure the ability of the American research university to maintain the excellence in research and doctoral education needed to help the United States compete, prosper, and achieve national goals for health, energy, the environment, and security in the global community of the 21st century?

In response, the National Research Council convened a committee of individuals who are leaders in academia, industry, government, and national laboratories. The committee’s report, Research Universities and the Future of America, explains its findings and the 10 actions it recommends. This booklet summarizes those findings and recommendations, and highlights several examples of how university research has contributed to discovery and progress. 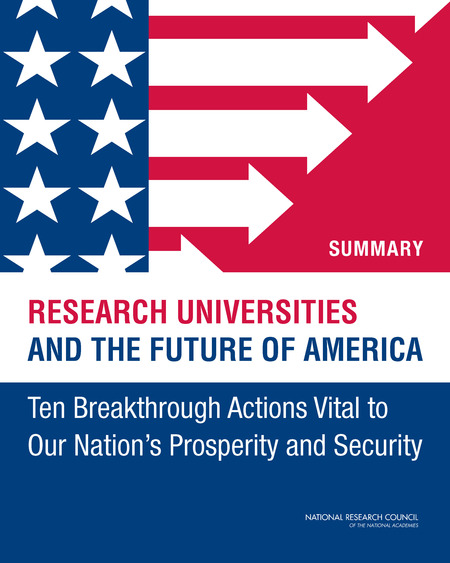 Research Universities and the Future of America presents critically important strategies for ensuring that our nation's research universities contribute strongly to America's prosperity, security, and national goals. Widely considered the best in the world, our nation's research universities today confront significant financial pressures, important advances in technology, a changing demographic landscape, and increased international competition. This report provides a course of action for ensuring our universities continue to produce the knowledge, ideas, and talent the United States needs to be a global leader in the 21st century.

Research Universities and the Future of America focuses on strengthening and expanding the partnership among universities and government, business, and philanthropy that has been central to American prosperity and security. The report focuses on the top 10 actions that Congress, the federal government, state governments, research universities, and others could take to strengthen the research and education missions of our research universities, their relationships with other parts of the national research enterprise, and their ability to transfer new knowledge and ideas to those who productively use them in our society and economy.

This report examines trends in university finance, prospects for improving university operations, opportunities for deploying technology, and improvement in the regulation of higher education institutions. It also explores ways to improve pathways to graduate education, take advantage of opportunities to increase student diversity, and realign doctoral education for the careers new doctorates will follow. Research Universities and the Future of America is an important resource for policy makers on the federal and state levels, university administrators, philanthropic organizations, faculty, technology transfer specialists, libraries, and researchers.