Get This Book
Visit NAP.edu/10766 to get more information about this book, to buy it in print, or to download it as a free PDF.
« Previous: Appendix H: Pore Pressure Induced by Fluid Injection
Page 229 Share Cite
Suggested Citation:"Appendix I: Hydraulic Fracture Microseismic Monitoring." National Research Council. 2013. Induced Seismicity Potential in Energy Technologies. Washington, DC: The National Academies Press. doi: 10.17226/13355.
×

During a hydraulic fracture operation, very small earthquakes (M -4 to 0) (microseismic events) are induced from the high-pressure injection of fluids into the subsurface. These “microearthquakes” are thought to be caused by the increase in pore pressure leaking off into rock surrounding the hydraulic fracture. The increased pore pressure causes small natural fractures in the formation to slip, causing microearthquakes. These microearthquakes are thousands of times smaller than a typical earthquake that can be felt by humans. Recording and location analysis of microseismicity requires specialized seismic sensing equipment and processing algorithms. The location and size of the microseismicity are used by oil and gas operators to help determine the geometry of hydraulic fractures in the formation. Microseismic mapping is a very useful tool in planning fieldwide well development programs, such as horizontal well direction and the spacing between wells, as well as aiding the design of hydraulic fracturing procedures, such as injection rate and fluid volume. Microseismic data are acquired with either an array of seismic instruments (geophones or accelerometers) in one or multiple wellbores, or with a large number (100 to more than 1,000) of geophones near or on the surface (Figure I.1). Specialized data processing techniques are used to precisely locate the microseismic events in time and space and to compute source parameters such as seismic moment, magnitude, and moment tensors, if the data are adequate.

FIGURE 1.1 Diagram demonstrating microseismic monitoring of a hydraulic fracture. The hydraulic fracture induces microearthquakes that are recorded with seismometers in a nearby well bore (left) or a large number of seismometer instruments placed on or near the surface (right). SOURCE: Left, courtesy MEQ Geo Inc.; right, courtesy of MicroSeismic, Inc. 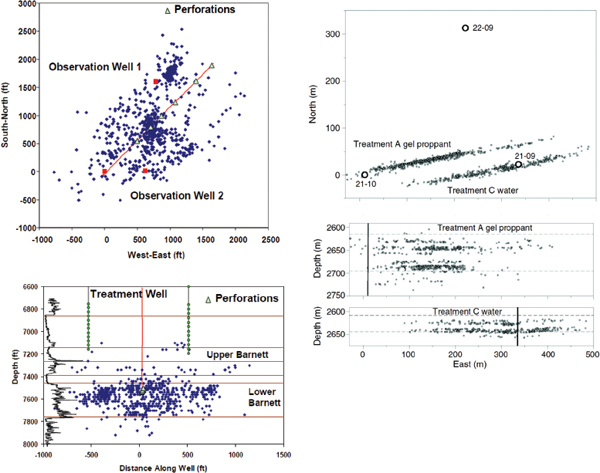 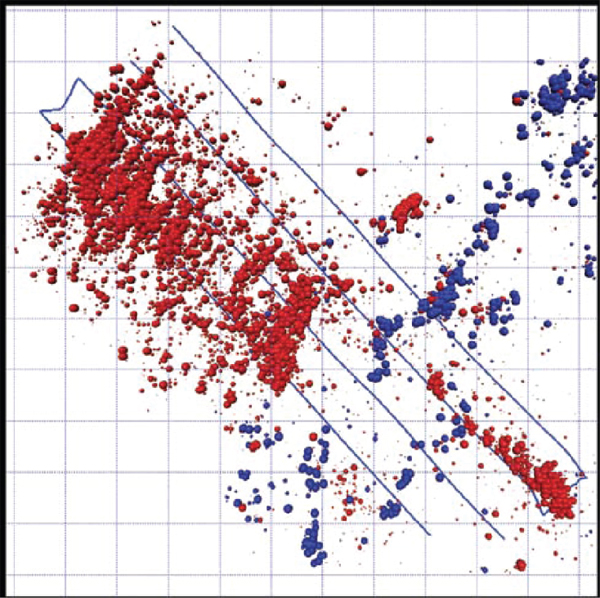 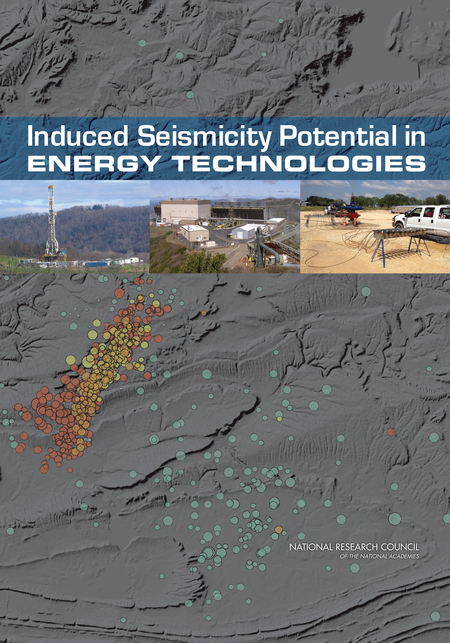