Aging in Asia: Findings from New and Emerging Data Initiatives (2012)

This page is intentionally left blank.

Next: 4 Population Aging, Intergenerational Transfers, and Economic Growth: Asia in a Global Context--Ronald Lee and Andrew Mason »
Aging in Asia: Findings from New and Emerging Data Initiatives Get This Book
× 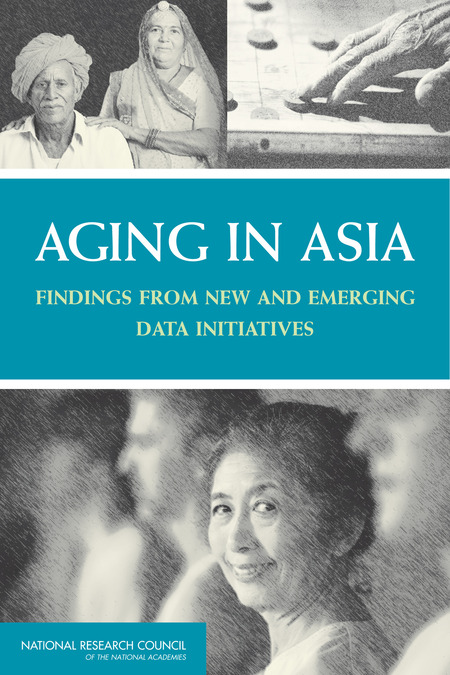 The population of Asia is growing both larger and older. Demographically the most important continent on the world, Asia's population, currently estimated to be 4.2 billion, is expected to increase to about 5.9 billion by 2050. Rapid declines in fertility, together with rising life expectancy, are altering the age structure of the population so that in 2050, for the first time in history, there will be roughly as many people in Asia over the age of 65 as under the age of 15.

It is against this backdrop that the Division of Behavioral and Social Research at the U.S. National Institute on Aging (NIA) asked the National Research Council (NRC), through the Committee on Population, to undertake a project on advancing behavioral and social research on aging in Asia.

Aging in Asia: Findings from New and Emerging Data Initiatives is a peer-reviewed collection of papers from China, India, Indonesia, Japan, and Thailand that were presented at two conferences organized in conjunction with the Chinese Academy of Sciences, Indian National Science Academy, Indonesian Academy of Sciences, and Science Council of Japan; the first conference was hosted by the Chinese Academy of Social Sciences in Beijing, and the second conference was hosted by the Indian National Science Academy in New Delhi. The papers in the volume highlight the contributions from new and emerging data initiatives in the region and cover subject areas such as economic growth, labor markets, and consumption; family roles and responsibilities; and labor markets and consumption.