Visit NAP.edu/10766 to get more information about this book, to buy it in print, or to download it as a free PDF.
Page i Share Cite
Suggested Citation:"Front Matter." National Research Council. 1989. Fairness in Employment Testing: Validity Generalization, Minority Issues, and the General Aptitude Test Battery. Washington, DC: The National Academies Press. doi: 10.17226/1338.
×

Preface The Department of Labor is considering whether to promote the use of its General Aptitude Test Battery (GATB) throughout the U.S. Employ- ment Service to screen many of the 19 million people who pass through the system annually in search of private- and public-sector jobs. This study was undertaken at the agency's request because system-wide use of the test battery for referral purposes raises important questions of public policy. In order to provide employers with the maximum benefits of testing, the Employment Service would need to refer applicants in order of test score. Such a policy, however, would severely reduce the employment opportunities of lower-scoring applicants, particularly of minority job seekers, who have lower average test scores as a group than the majority. What is the appropriate balance between anticipated productivity gains from better employee selection and the well-being of individual job seekers? Can equal employment opportunity be said to exist if screening methods systematically filter out very large proportions of minority candidates? Such an outcome would leave employers and the Employ- ment Service vulnerable to the charge of discrimination under Title VII of the Civil Rights Act of 1964. In pilot projects of the test-based referral system, conducted since 1980, Department of Labor officials have adopted a score-adjustment strategy in which each applicant's test score is computed as a percentile score within his or her own racial or ethnic group (black, Hispanic, and other). By combining within-group percentile scores and top-down . . V11

viii PREFACE selection of the applicants to be referred, the Department of Labor sought a workable compromise between productivity goals and federal equal employment opportunity policy. However, the within-group scoring strategy created its own problem: the Department of Justice questioned its legality and constitutionality on grounds of reverse discrim- ination. As a consequence of this challenge, the Department of Labor sought guidance from the National Academy of Sciences, which, through the National Research Council, has convened a committee of experts to conduct a thoroughgoing evaluation of the plan to use the GATB as the primary tool for deciding which applicants to refer to employers. The Department of Labor asked the committee to address a number of important technical questions to establish the appropriateness of using a single general aptitude test to predict performance in a large number of very different jobs. In addition, recognizing that these technical issues are surrounded by a complex web of governmental policies and legal require- ments and have serious economic and social implications, the Department of Labor asked the committee to consider the possible effects of wide- spread adoption of testing in the Employment Service-effects on em- ployers, on various categories of job seekers, and on the economic health of the country. This study is intended to help policy makers decide whether the GATB should be given a primary role in the Employment Service referral system and, in that event, to offer guidance on methods for assembling the pool of job candidates and for reporting test scores. The policy context is described in Chapters 1 and 2. Chapter 3 presents an overview of the U.S. Employment Service and its activities. In Chapter 4 we look at the quality of the GATB, and in Chapter 5 discuss critical weaknesses in the test and in the GATB research program that must be overcome if it is to be used as a primary referral tool. The principal scientific underpinnings of the Department of Labor's plan to use the GATB for referrals to all kinds of jobs, contained in the theory of validity generalization, are examined in Chapters 6 through 9. Chapter 8 looks at the accumulated body of GATB validity research and presents the committee's judgments about the degree of predictive accuracy that can reasonably be assumed for jobs not studied. Chapter 10 describes the referral system- which we call the VG-GATB Referral System to signal its dependence on validity generalization as it has been conceptualized by the research staff of the U.S. Employment Service. Chapter 11 discusses the potential effects of the system on the various Employment Service clients, and Chapter 12 analyzes the claims about economic benefits said to accrue from referring job candidates in order of test score.

PREFACE 1X Based on the technical findings presented earlier, Chapters 13 and 14 present the committee's recommendations to policy makers. In Chapter 13 the committee presents its conclusions about the fair use of employ- ment tests and makes recommendations about adjusting the test scores of minority job seekers. Chapter 14 presents the committee's most impor- tant recommendations for the use of the GATB and the design of the VG-GATB Referral System. In providing independent advice to the government on matters of science policy, the National Research Council depends on committees of volunteers chosen for their expertise, together with members of the permanent staff, to carry out its work. The members and staff of the Committee on the General Aptitude Test Battery include experts in statistics and meta-analysis, psychometrics, industrial and personnel psychology, economics, sociology, policy analysis, law, and the Employ- ment Service the expertise needed to address the broad range of technical and policy questions raised in this study. Brief biographies of committee and staff appear in Appendix C. During the course of its study, the committee has called on a great many people, who gave generously of their time, their expertise, and their insights. Because the policy decisions ultimately made by the Department of Labor with regard to the GATB will have an impact, perhaps a great impact, on the interests of a variety of individuals, groups, and institu- tionsj a carefully selected liaison group was appointed to ensure that the committee would be conversant with all relevant policy perspectives and areas of expertise. Our particular thanks go to the 28 members of this group who met with us on three occasions and provided needed informa- tion and position papers throughout. Individual members also presented occasional special briefings on specific issues before the committee. We received assistance from other quarters as well. In response to questions from the committee about employers' reactions to the VG-GATB system and within-group scoring, the Employers' National Job Service Committee developed and circulated a questionnaire that elicited over 500 responses. Our work also benefited from the cooperation of the National Rehabilitation Association and the major veterans organizations. We owe a great deal to John Hawk, personnel research psychologist in the test research division of the U.S. Employment Service, and his colleagues in the central and regional offices. In response to our sheer need to be educated about the Employment Service system and the GATB, they provided helpful briefing documents. As we came to grips with the very large undertaking required by our charge, they remained helpful and forthcoming in the face of frequent requests for data, documents long buried in the files, information about day-to-day opera- tions, and myriad other questions that came up. Staff members of the

X PREFACE Northern Test Development Field Center provided the tapes of the GATB data base and arranged for the collection of a sample of item-Ievel test data for our item-bias analysis. The Southern Test Development Field Center supplied useful information about the development of the GATB and the operations of the Employment Service system. We would also like to recognize the contributions of several consultants who helped with our data analysis: Douglas Weeks assisted committee member Robert Linn in the differential validity and differential prediction analysis; Laura Burris and Victoria Crawshaw assisted Paul Sackett with the meta-analysis of the entire GATB data base; Robin Corley assisted Lorrie Shepard with a study of item bias; Anita Tesh assisted Richard Jaeger with a synthesis of the literature on GATB properties. Glen Sueyoshi contributed a background paper on the economic effects of improved employee selection as the question is addressed in the econom- ics literature. Our acknowledgments would not be complete without special thanks to staff members who worked with the committee: Hilda Wing, who assisted with the research and writing; Diane Goldman and Carolyn Sax, who provided administrative support and kept control of the evolving manu- script; and Christine McShane, whose graceful editing defied a hectic schedule. JOHN A. HARTIGAN, Chair ALEXANDRA K. WIGDOR, Study Director Committee on the General Aptitude Test Battery

Next: Summary »
Fairness in Employment Testing: Validity Generalization, Minority Issues, and the General Aptitude Test Battery Get This Book
× 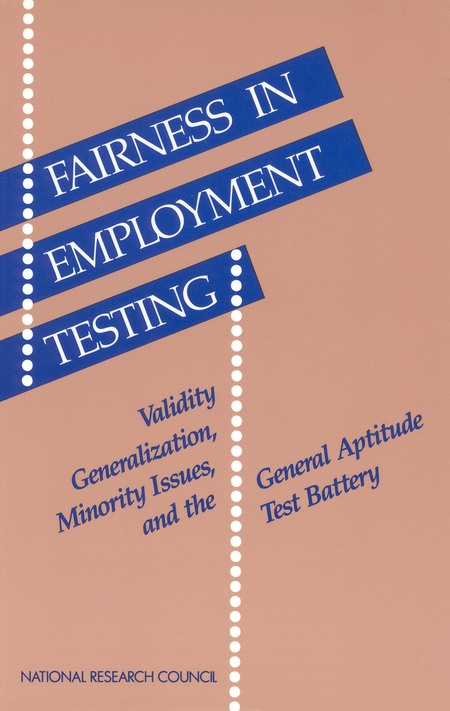 Declining American competitiveness in world economic markets has renewed interest in employment testing as a way of putting the right workers in the right jobs. A new study of the U.S. Department of Labor's General Aptitude Test Battery (GATB) Referral System sheds light on key questions for America's employers: How well does the GATB predict job success? Are there scientific justifications for adjusting minority test scores? Will increased use of the GATB result in substantial increases in productivity?

Fairness in Employment Testing evaluates both the validity generalization techniques used to justify the use of the GATB across the spectrum of U.S. jobs and the policy of adjusting test scores to promote equal opportunity.