Get This Book
Visit NAP.edu/10766 to get more information about this book, to buy it in print, or to download it as a free PDF.
« Previous: Front Matter
Page 1 Share Cite
Suggested Citation:"The Impact of Information Technology." National Research Council. 2012. Continuing Innovation in Information Technology. Washington, DC: The National Academies Press. doi: 10.17226/13427.
×

The Impact of Information Technology

Information technology (IT) is widely understood to be the enabling technology of the 21st century.1 IT has transformed, and continues to transform, all aspects of our lives: commerce and finance, education, employment, energy, health care, manufacturing, government, national security, transportation, communications, entertainment, science, and engineering. IT and its impact on the U.S. economy—both directly (the IT sector itself) and indirectly (other sectors that are powered by advances in IT)2—continue to grow in size and importance.

In total, according to estimates for 2010 by the Bureau of Economic Analysis, the IT-intensive “information-communications-technology-producing” industries3 grew by 16.3 percent and contributed nearly 5 percent to the overall U.S. gross domestic product (GDP).4 A 2011 study by the McKinsey Global Institute found that in 2009 Internet-related activities alone contributed an average of 3.8 percent to the U.S. GDP.5 (By contrast, the total federal funding in fiscal year 2010 for the networking and IT research and development (R&D) program, which includes most federal support for IT R&D, was approximately $4.3 billion,6 just under 0.03 percent of GDP.7) These substantial contributions to the economy reflect only the direct economic benefits of the IT sector and do not capture the full benefits realized from the application of IT throughout the economy.

To appreciate the magnitude and breadth of its achievements, imagine spending a day without IT. This would be a day without the Internet and all that it enables. A day without diagnostic medical imaging. A day during which automobiles lacked electronic ignition, antilock brakes, and electronic stability control. A day without digital media—without wireless telephones, high-definition televisions, MP3 audio, cable- or Internet-delivered video, computer animation, and video games. A day during which aircraft could not fly, travelers had to navigate without benefit of the Global Positioning System (GPS), weather forecasters had no models, banks and merchants could not transfer funds electronically, and factory automation ceased to function. It would be a day in which the U.S. military lacked precision munitions, did not have the capabilities for network-centric warfare, and did not enjoy technological supremacy. It would be, for most people in the United States and the rest of the developed world, a “day the Earth stood still.”

Next: Universities, Industry, and Government: A Complex Partnership Yielding Innovation and Leadership »
Continuing Innovation in Information Technology Get This Book
× 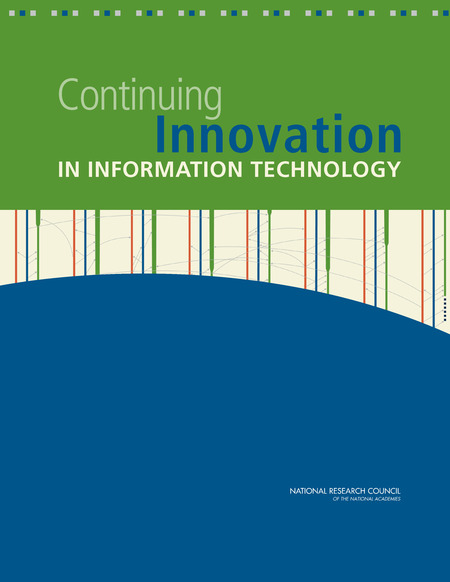 Information technology (IT) is widely understood to be the enabling technology of the 21st century. IT has transformed, and continues to transform, all aspects of our lives: commerce and finance, education, employment, energy, health care, manufacturing, government, national security, transportation, communications, entertainment, science, and engineering. IT and its impact on the U.S. economy-both directly (the IT sector itself) and indirectly (other sectors that are powered by advances in IT)—continue to grow in size and importance.

In 1995, the National Research Council's Computer Science and Telecommunications Board (CSTB) produced the report Evolving the High Performance Computing and Communications Initiative to Support the Nation's Information Infrastructure. A graphic in that report, often called the "tire tracks" diagram because of its appearance, produced an extraordinary response by clearly linking government investments in academic and industry research to the ultimate creation of new information technology industries with more than $1 billion in annual revenue.

Used in presentations to Congress and executive branch decision makers and discussed broadly in the research and innovation policy communities, the tire tracks figure dispelled the assumption that the commercially successful IT industry is self-sufficient, underscoring through long incubation periods of years and even decades. The figure was updated in 2002, 2003, and 2009 reports produced by the CSTB. With the support of the National Science Foundation, CSTB updated the tire tracks figure. Continuing Innovation in Information Technology includes the updated figure and a brief text based in large part on prior CSTB reports.