Get This Book
Visit NAP.edu/10766 to get more information about this book, to buy it in print, or to download it as a free PDF.
« Previous: Appendix B: Agenda
Page 23 Share Cite
Suggested Citation:"Appendix C: Speaker Biographies." Institute of Medicine. 2012. Post-Incident Recovery Considerations of the Health Care Service Delivery Infrastructure: Workshop Summary. Washington, DC: The National Academies Press. doi: 10.17226/13442.
×

Lynn Kidder, M.A., B.A. (Session Chair), is the president and chief executive officer of the Bipartisan WMD Terrorism Research Center (the WMD Center), a not-for-profit research and educational organization, founded by former senators Bob Graham and Jim Talent at the conclusion of the Congressional Commission on the Prevention of Weapons of Mass Destruction, Proliferation, and Terrorism. The WMD Center was chartered to help government and private-sector leaders better understand the unique threats and challenges of bioterrorism and the actions required for effective response to either deliberate or naturally occurring biological disasters. She was the principal investigator for the WMD Center’s 2011 Bio-Response Report Card. Ms. Kidder also serves as a senior advisor to the Center for Excellence in Disaster Management and Humanitarian Assistance, a Department of Defense organization based at U.S. Pacific Command. It provides training to enhance civil-military, interagency, and NGO coordination during international disaster response. Ms. Kidder was formerly a senior vice president at Business Executives for National Security, where she led the development and nationwide implementation of programs to facilitate resilience-focused public-private collaboration. Ms. Kidder’s other professional experience includes executive-level management in state government, corporate government affairs, and 8 years as a professional staff member in the U.S. Senate. She also served for 5 years as the executive director for the nonprofit North Bay Leadership Council in Northern California, and was credited with numerous regional initiatives among private employers, public officials, and other civic leaders. She holds a B.A. from Indiana University and a master’s degree from the University of Texas at Austin,

and did postgraduate study in public administration at George Mason University.

James Craig was named health protection director at the Mississippi State Department of Health in 2004 after serving as its director of the Office of Emergency Planning and Response for the agency. Prior to this position, he served as the director of Emergency Medical Services. He was recruited to the agency in 1992 from Louisiana Health and Hospitals, Emergency Medical Services Division. Protecting the public has been a significant part of his life. He served as chair of the Mississippi Fire Fighters Minimum Standards and Training Board. He is also an emergency medical technician, hazardous material technician, and volunteer fire chief in his local community. Mr. Craig has an A.A.S. in forensic science from Louisiana State University and a B.S. in industrial technology/occupational safety from the University of Southwestern Louisiana.

Deborah Ingram, M.A., is the assistant administrator, Recovery Directorate at FEMA. Her public service career spans more than 30 years and includes broad experience in a variety of programs at the federal and local government levels. For more than 10 years, Ms. Ingram has served in a number of senior positions in FEMA’s headquarters. In her capacity as assistant administrator, Ms. Ingram has responsibility for leadership and oversight of mandated federal disaster assistance programs that support individuals and communities affected by disasters in their efforts to recover, including individual assistance, public assistance, community recovery, and mass care and voluntary agency coordination. These programs constitute the majority of the resources provided by the federal government (through FEMA) to directly address the short-, medium-, and long-term impacts of a disaster on individuals and communities. Previously, Ms. Ingram held a variety of senior positions in FEMA’s Federal Insurance and Mitigation Directorate, where she was responsible for programs that assist states, tribes, and local communities to reduce their risk to natural hazards and disasters. Among her many achievements, Ms. Ingram was instrumental in leading the unification of hazard mitigation grant programs, building strong relationships with FEMA’s partners, and, during the summer of 2010, providing key leadership in development and support of the Integrated Services Team during the aftermath of the Deepwater Horizon oil spill. Ms. Ingram was appointed to the federal Senior Executive Service in 2007. Prior to coming to FEMA,

Ms. Ingram spent 11 years at the Environmental Protection Agency, where she held a variety of senior and management positions in strategic planning and administration and resources management. Ms. Ingram started her public service career working at the local government level in North Carolina, and later in Virginia, where she managed and implemented a variety of federally funded grant programs. Ms. Ingram holds a B.S. in psychology from East Carolina University, an M.A. in public administration from the University of Virginia, and an M.A. in psychology from George Mason University.

Linda MacIntyre, B.S.N., Ph.D., is chair of the American Red Cross National Nursing Committee, and an assistant professor at the University of California, San Francisco. After working as a residential social worker in England, Dr. MacIntyre worked briefly on a medical surgical/oncology floor before moving to Missouri, where she was a hemodialysis nurse for 5 years. Working in hemodialysis was the impetus for Dr. MacIntyre to move into a position to address health prevention, and this led her to become the community health nurse manager and later the director of community health and youth for the Greater Kansas City Chapter of the American Red Cross. She was responsible for health screening programs, HIV and AIDS education, Family Caregiving Training, youth programs, a large flu shot program, and local disaster health preparedness and response. Under her direction, the flu shot program grew from serving 4,000 to as many as 18,500 in 1 year. Dr. MacIntyre worked closely with community agencies and the Kansas City public health department in addressing rates of HIV and AIDS. She coordinated culturally specific HIV and AIDS training for African American and Hispanic communities in partnership with multiple agencies, the incidence of HIV and AIDS decreased in African American and Hispanic individuals in the Greater Kansas City Area.

Dr. MacIntyre participated in community coalitions and worked on an NIH Community Disaster Information System project based at Miami University in Ohio. She served on several community coalitions, was a member of the Medical Reserve Corps Steering Committee for an eightcounty region, and worked closely with the public health department to improve disaster response in the greater Kansas City metropolitan area. Dr. MacIntyre was a member of the Red Cross National Nursing Committee and worked extensively on a committee that addressed pharmaceutical stockpiling and delivery strategies related to disaster preparedness and response. As a volunteer, she worked as the American Red Cross Pacific

Joshua Riff, M.D., M.B.A., is the medical director of Target Corporation and is a board-certified emergency medicine physician. After medical school he completed his residency in emergency medicine at Johns Hopkins Hospital, where he learned of the plight of an inner-city health care system and the value of alternative models of health care delivery. Upon graduation he moved to Tucson Medical Center, where he worked in an emergency room, seeing over 100,000 patients per year. His experience there taught him the difficulties associated with access to high-quality medical care and of the need for an integrated medical system. In 2006 he started at Target as medical director of Target Clinics, where he helped to provide access to convenient, affordable, and high-quality medical care through health clinics located in Target stores. Currently, he is medical director of Target Corporation where he plays a role in helping to create a culture of health and wellness for Target’s more than 350,000 employees; reinforcing the retailer as a leading partner in health care to consumers; and ensuring the company’s preparedness for influenza pandemics or other public health needs. Dr. Riff sits on the editorial board for the Center for Infectious Disease Research and Policy and Retail Clinic News. He is a member of the Hennepin County Medical Foundation and sits on the National Business Group on Health Evidence Based Benefit Design committee. He completed his M.D./M.B.A. at Tufts University in conjunction with Brandeis University in Boston, Massachusetts. During this time he started the M.D./M.B.A. consulting group in which students work on hospital consulting projects ranging from ideal staffing levels to waiting time analyses.

Assistance Medicine at the Uniformed Services University of the Health Sciences (USUHS) School of Medicine. He held a variety of disaster response positions while on active duty with the U.S. Public Health Service before retiring in 2003. Dr. Yeskey also served as senior medical policy advisor in FEMA’s Emergency Management Agency’s Response Division and was director of the Office of Emergency Response for HHS. From 1999 to 2002, he was assigned to the Centers for Disease Control and Prevention and served as director of the Bioterrorism Preparedness and Response Program at the National Center for Infectious Diseases. Before that, he was associate director for Emergency Public Health and Science in the Division of Emergency and Environmental Health Services at the National Center for Environmental Health. For 16 years, he was a medical officer on the U.S. Public Health Service Disaster Medical Assistance Team, 6 years as commanding officer. Dr. Yeskey also served as chief of medical operations for the Kosovo refugee crisis at Fort Dix, New Jersey. He was a member of a four-person federal health assessment team that assisted with the response to the Oklahoma City bombing. Dr. Yeskey received his undergraduate degree from Brown University and his medical degree from USUHS, and is board certified in emergency medicine. 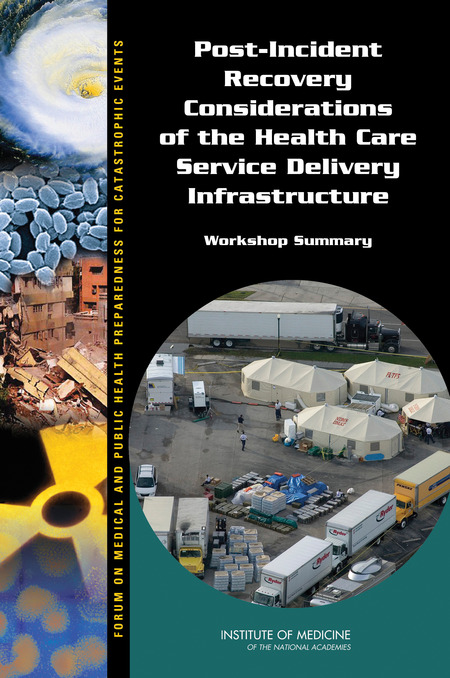 Health systems and assets are a large part of the critical infrastructure of any community and are vital not only for the safety and well-being of its citizens, but also for the economic vitality, quality of life, and livelihood of the entire community. As part of its ongoing mission to foster dialogue among stakeholders and to confront the challenges inherent in ensuring the nation's health security, the Institute of Medicine (IOM) Forum on Medical and Public Health Preparedness for Catastrophic Events sponsored a town hall session at the 2012 Public Health Preparedness Summit. This event took place February 21-24 in Anaheim, California.

Post-Incident Recovery Considerations of the Health Care Service Delivery Infrastructure serves as a summary of the session and explains the value of regional capacity building; the importance of interagency, intergovernmental, and public-private collaboration; and the significant role that health care coalitions can play in ensuring resilient communities and national health security.